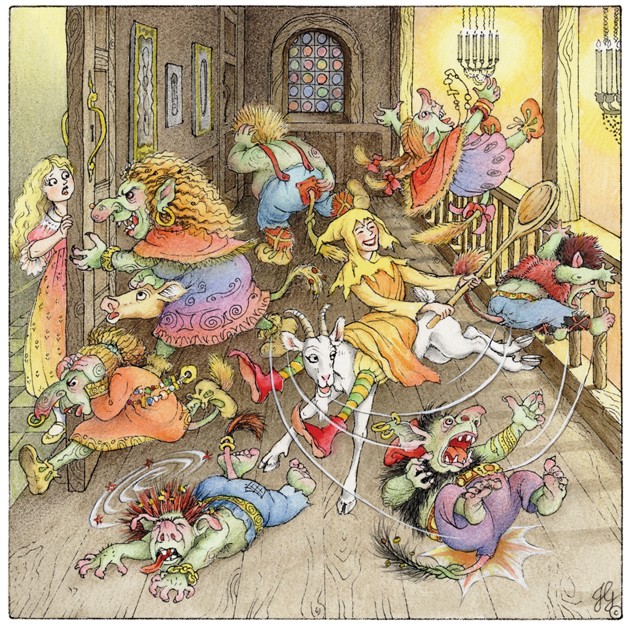 Once upon a time a queen longed for a child of her own. Her palace was magnificent, but she wished to hear children’s laughter. The forest she lived in was magical, but without a child to enjoy the snow and sun, the landscape seemed bleak.

Then one day the queen noticed a little girl playing in the cold courtyard. She was dressed in tattered clothes. The queen leaned out the door and called, “No strangers permitted in the courtyard.” But the girl looked up at her with blazing blue eyes and said, “My mother can help you.”

Then she pointed to the gates where a woman wearing clothes as tattered as the child’s was selling eggs. “She has magical powers that help women have children,” the girl said.

The queen eagerly invited the egg-seller inside, but when asked if she had the power to help women have children, the woman shook her head and said, “I’ve no such powers.”

The queen did not believe her. “I want a child more than anything and think you can help me.” Then the queen ordered her servants to bring a feast and to serve it to the woman and her child.

The woman ate and drank heartily, and when she was half-drunk, she said, “Perhaps I know a spell or two.”

She instructed the queen to have her servants carry two pails of water to her in her bed. “You must wash yourself in each pail, and when you are finished, pour the water under the bed. In the morning you will find two flowers beneath your bed. You must eat the fair flower, but whatever you do, do not eat the one that is rare.”

The queen did exactly as she was instructed, and in the morning two flowers were growing under the bed. One was shaped like a star and was a startling shade of green. The other was pink and perfumed. And so the queen ate the pink flower.

Ah, but it tasted so delicious, she could not resist the other. “Surely it couldn’t hurt to eat this one, too,” she said. This she did.

Not long after that, the queen gave birth to a child — a most peculiar-looking girl who held a wooden spoon in her hand and a tattered hood over her head. She was riding a goat, and her face was odd indeed. “Momma!” she cried.

The queen named her Tatterhood.

And moments later the queen gave birth to Tatterhood’s twin, this one pretty and sweet. The queen named her Betsy.

Tatterhood and Betsy were opposites, but they loved each other very much.

One wintry night the queen heard noise outside her room. When Tatterhood asked what that was, the queen said it was a pack of trolls who visited the palace every seven years. “They always cause a great deal of trouble,” she said.

Tatterhood was a bold girl, and she was determined to drive away the trolls. “Close the doors tightly behind me,” she told Betsy. “I’ll take care of this.”

Betsy did as instructed, but she was worried about her sister, and so after a few moments she poked her head around the corner. One of the trolls snatched Betsy’s head, replacing it with a calf’s head.

Tatterhood knew she must retrieve her sister’s head, so she ran to the water and jumped upon a sailboat and set out to sea, heading for the trolls’ island. When she reached the island she raced into the trolls’ palace, and there she saw Betsy’s head hanging on the wall. She took it and leapt outside.

There the trolls surrounded her, but nothing would stop Tatterhood. She fought until at last she escaped and sailed home.

When Betsy had her head back on her body, the twins agreed that when they grew up, they would go together on an adventure.

Many years passed, and the girls grew old enough to set out on their own. When they reached a distant kingdom, they stepped ashore. All at once the young prince there fell in love with Betsy. “Marry me,” he said.

But Betsy replied, “I cannot marry until someone asks my sister to be his bride.”

The prince was dismayed. Who could love a creature as odd as Tatterhood, he wondered. But the prince was polite. He invited both young ladies to dine with him. And he begged his brother to attend the feast.

“Brother,” the prince whispered, “when you meet Tatterhood, ask her to marry you.”

The young prince loved his brother, so naturally he agreed, but when he saw Tatterhood for the first time his heart sank. He had given his word, however, so he asked Tatterhood to be his bride; she agreed.

On their wedding day Tatterhood looked at her groom and said, “Why didn’t you ask me why I’m riding a goat?”

And so he asked her.

She laughed and replied, “This is no goat. It is a grand horse!” And the moment she said those words, the goat turned into a fine stallion.

Tatterhood then asked, “Why don’t you ask me why I carry a wooden spoon?”

He did, and she said, “This is no spoon, it is a magic wand!” and promptly it turned into a magic wand.

“Why not ask me why I wear this tattered hood?” she said, and when the groom asked her just that, she answered, “This is my crown!”

The moment she said those words, the hood turned into a golden crown, and Tatterhood became beautiful.

The prince was very happy to see this transformation, but truth be told, he already loved her, just as she was. And they lived happily ever after.