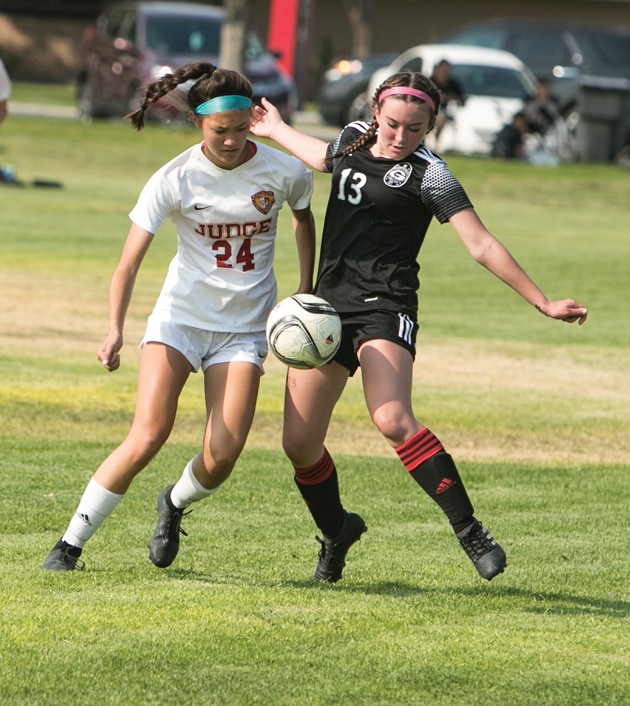 Grantsville’s Callie Carlson (13) and Judge Memorial’s Sarah Bowler battle for the ball during a Region 13 girls soccer match on Sept. 17 in Grantsville. Grantsville’s 2020 season came to a close Saturday with a 7-0 loss to Manti in the Class 3A state quarterfinals.

The Grantsville girls soccer team knew it was in for a tough challenge in Saturday’s Class 3A quarterfinal game against top-ranked Manti, and the Cowboys would need to play virtually mistake-free in order to advance.

Unfortunately for GHS, not only did the Cowboys make mistakes — the Templars turned them into goals. Manti scored a pair of goals within the first four minutes and added two more before halftime, eventually cruising to a 7-0 win that ended Grantsville’s season.

“We started out very poorly and didn’t recover,” Grantsville coach Travis Lowry said. “We knew coming in that they were good and they take advantage of mistakes.”

The loss marked just the second time all season that the Cowboys (10-7) failed to score a goal, and the third time in the past 65 games dating back to the end of the 2016 season. Manti (17-1) scored seven times for the fourth time this season and second in a row, having beaten Grand 7-0 in Wednesday’s second-round game.

The Templars took the lead less than two and a half minutes into Saturday’s contest, as Manti got a throw-in deep in Grantsville’s end of the field. Breanne Wayman found some open space in front of the Cowboys’ net, leaving Grantsville goalkeeper Adalyn Enslen with little hope of stopping the wide-open opportunity as the ball came to Wayman.

Wayman converted again just 1:23 later, taking advantage of a rebound that Enslen couldn’t quite corral to put Manti in front 2-0.

Grantsville settled down a bit after the Templars’ initial wave, with Whitney Wangsgard’s shot deflecting off a Manti defender and then off the crossbar in the ninth minute. However, Manti regained its momentum, and after Enslen made a save on Elsey Olson in the 16th minute, Morgan Chidester scored on a corner kick in the 19th minute to make it a 3-0 game. Wayman added her third of the afternoon in the 33rd minute to give the Templars a 4-0 lead at halftime.

“We made four mistakes in the first (33) minutes, and they scored on all four of them,” Lowry said. “It’s hard to recover from that.”

Grantsville played a stronger game to start the second half, but was unable to solve Templars goalkeeper Katie Larsen, who made four saves to pick up the shutout. The Cowboys’ defense also began to wear down, and Manti added three more goals in the final minutes: a deflection by Wayman in the 58th minute; a ball that bounced in off Alivya Osborn in the 71st; and another by Ally Squire in the 75th.

“I kind of hoped and had a dream that this team could go a little further, of course,” Lowry said. “I think they’re amazing. It was a great season — 10 wins for us is huge. We got those seniors that we’re sending away that we’re going to miss. A couple of them started out high-level, and a couple others grew into it.”

Manti will face No. 4 Juab in the Class 3A semifinals Wednesday in Draper. The other semifinal pits No. 2 Morgan against No. 3 Judge Memorial. The state championship game is scheduled for Monday at Rio Tinto Stadium in Sandy.