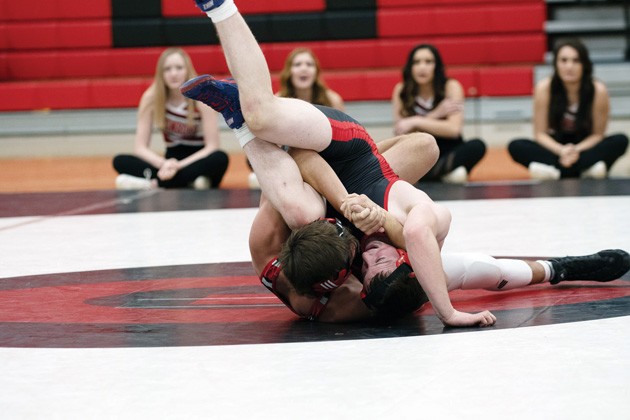 Grantsville’s Grant Rounds (bottom) ties up his opponent during the Cowboys’ dual meet against Manti on Thursday at Grantsville High School. Manti won the dual 36-35 despite Rounds’ victory by fall at 152 pounds.

With several wrestlers nursing injuries from their 10-match marathon at the 3A Duals, the Grantsville wrestling team went into its dual against Manti last Thursday with two junior varsity wrestlers filling varsity slots and with no wrestlers in two weights. The dual came down to the final match; unfortunately, the Cowboys came up one point short and fell to the Templars 36-35.

“We came out a big sluggish in some of the matches, but a lot of our younger guys stepped up,” Grantsville coach Clarence Evans said. “Giving up two forfeits hurt, but I am proud of the guys who stepped up.

“Richie Tracy, who usually wrestles JV 152 pounds for us, filled in at Varsity 160 and got us a pin. At 152 pounds, Grant Rounds was down in his match, and he pinned his guy, too. John Hunzeker, our 145-pound wrestler, came out and really dominated his match and got a pin as well,” Evans added.

At 106 pounds, sophomore Kole Johnson earned a 19-3 tech fall early in the match, and at 120 pounds, senior Joseph Mecham went up 10-0 before pinning his opponent in the first period.

Hunzeker, a sophomore who took over the 145-pound varsity spot just last week for injured senior Nathen Carpenter, came out and quickly pinned his foe. In the next match, sophomore Grant Rounds was down in points late in the match before he turned his opponent and won by fall in the third period.

With both 160-pound varsity and JV wrestlers out with injuries and sickness, junior wrestler Richie Tracy, who usually wrestles junior varsity 152 pounds, went up a weight and filled the varsity 160-pound spot. Tracy jumped out to a 4-1 lead before ending his bout against his bigger adversary by fall.

Going into the final match, Grantsville held a 35-30 lead, but the final Manti wrestler was able to get the pin and the final six points to give the Templars the dual win 36-35.

Grantsville wrestled at the Best of the West Tournament Thursday and Friday and will next compete at the Rumble in Farmington this Friday and Saturday. The Cowboys’ final home match and Senior Night will be Jan. 23 as they host Summit Academy.