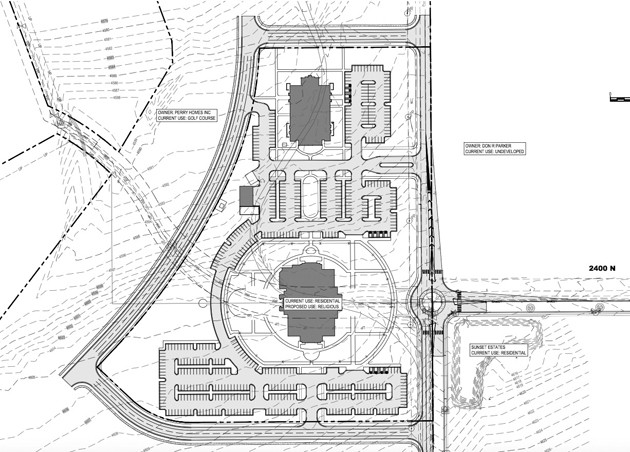 The Tooele City Planning Commission voted unanimously during their Wednesday night meeting to recommend that the City Council approve a conditional use permit for the new Jesus Christ of Latter-day Saints temple to be built at the west end of 2400 North.

During the meeting, Andrew Aagard, city planner presented the conditional use permit request by Tom Heath, representing the Church of Jesus Christ of Latter-day Saints for the Deseret Peak Utah Temple .

The temple will be built west of the intersection of 2400 North and 400 West in the Overlake area of Tooele City.

The site plan includes a three-story temple of 70,000 square-feet, a 20,000 square-foot meetinghouse, parking, and landscaped areas to be built on the 17-acre temple site.

The property where the temple will be built is undeveloped land and is zoned R1-7 residential,

Properties to the north, west, and south of the location are also zoned R1-7, according to Aagard.

Properties to the east are zoned R1-10 residential.

Aagard explained that parking at the location would not be an issue because the site will include many parking areas that can be shared between the meeting house and the temple.

“The parking will be talked about during the site plan review process,” said Aagard.

Prior to the meeting, Aagard asked heath about the lighting coming from the temple at night.

Heath said that the church would be dimming the light during the night between 50% to 75% so that residents living near the area wouldn’t be disturbed.

“It should also be noted that the lighting is directed upwards and away from residential zones to reduce glare,” Aagard noted. “Staff has included a condition in the conditional use permit saying that lighting must be dimmed between 50% and 75% during the hours of 11 p.m. to dawn.”

The Church, like any other agency who would like to build in Tooele County, must acquire a conditional use permit from the planning commission and city council to stay within city laws.

“They are requesting a conditional use permit to allow the use of churches and religious facilities to be constructed on the 17-acre site,” Aagard explained.

Aagard also told members of the commission that the church had submitted a site plan of the location where the temple and the meeting house will be built but they would not review it during Wednesday’s meeting.

“This application is to approve the uses on the property and to help demonstrate the applicant’s intentions for the property,” Aagard clarified.

During the meeting, a public hearing was held for the temple’s conditional use permit.

No comments were made via email or in person.

At the end of the meeting, all of the members of the commission voted to send a positive recommendation to the city council.