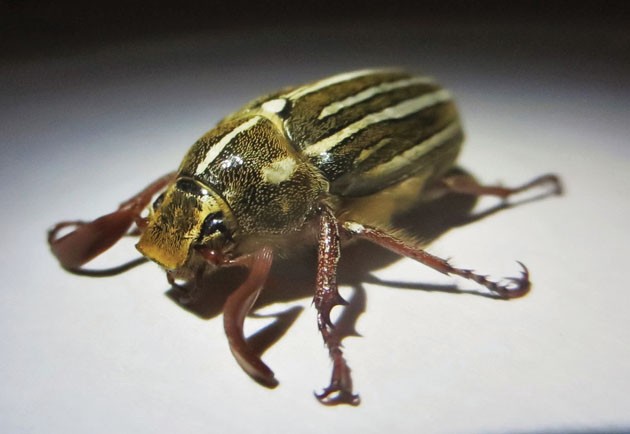 A male ten-lined June beetle was attracted to a nearby lamp, looking into the room from the window screen. He was left unharmed and only photographed.

Living in the western United States and Canada, the ten-lined June beetle is a species of the scarab beetle that is identified by its large size, the white stripes on its backside, and the small brown hairs located on its underside.

The stripes give the ten-lined June beetle its nickname, the watermelon beetle, but they are otherwise simply known as the May, June, or July beetle. Even though their size can exceed 1.25 inches, they are harmless and cannot bite. However, they can be intimidating due to their hissing capability, which commonly happens when they are disturbed, handled, or their backs are touched. Their hissing is caused by the air leaving the underside of their wings.

Both nocturnal and attracted to lights, the ten-lined June beetle is active during the summer seasons, and in most cases, it’s the males that are generally spotted flying about. Males can be distinguished from females by their excessively large-feathered antennas, which are used to track female pheromones in order to pinpoint their locations. Males ready to mate will usually find females wandering near their emergence holes, when they’ve just matured into adults and are crawling out of the ground. Females that have been spotted and copulated will lay 60 to 70 eggs; usually laying them either in the hole she just crawled from or in another hole she digs herself.

Hatching three to four weeks later, the larvae progress to feed and grow in the ground for two to four years, until they reach adulthood. During this time, the ten-lined June beetle’s larvae are known to be very damaging pests, as their diet consists of the roots of various plants. The effects larvae have can weaken or kill the entire plant, which can include several types of fruit trees, corn, cane fruits, potatoes, grass and roses. Less matured larvae tend to feed on the more tender roots located further in the ground, whereas more matured larvae cause the most drastic damage by feeding on the tougher roots nearer the surface.

After a few years of progressively molting through three instars, it is around May or June that as a pupa, the ten-lined June beetle creates a pupal cell to finish its maturing. After pupating into an adult, the ten-lined June beetle will dig its way to the surface so they may resume their life cycle. The adult’s time of emergence generally occurs from late June through September, and will often inhabit gardens, orchards, forests and crop fields. Though the adult’s diet consists of tree foliage, they cause little or no damage.