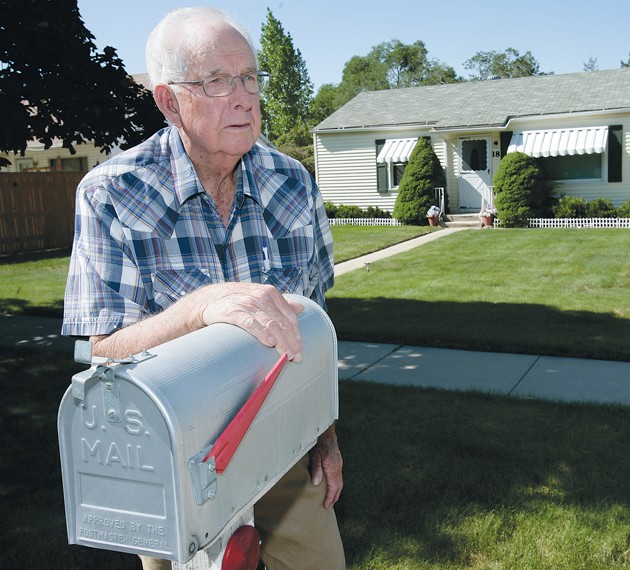 Charles “Chick” Stromberg in front of his home in Grantsville. Stromberg was a Tooele County Commissioner from 1978 to 1986.

August 8, 2013
Thank you, Chick Stromberg, for being very much alive

About a month ago, while seated at my desk editing letters to the editor for the July 9 edition of the Tooele Transcript-Bulletin, Lindsay Evans, one of our friendly receptionists who easily evokes smiles from customers and employees, burst into my office with an unexpected manifesto.

“There’s a gentleman in the front office by the name of Chick Stromberg, and he says he’s here to tell you that he isn’t dead.”

In the practice and craft of journalism, whether it’s print, broadcast or online, there are a million ways to screw up a story. Other than get the facts wrong, there are countless little annoyances that covertly find their way into stories, columns and editorials that can lay ruin to a journalist’s day — and reputation — even if he or she meticulously researched the material and triple-checked the facts.

To name a few, there’s spelling a prominent community member’s name incorrectly from the first paragraph to the last; putting the decimal point in the wrong place while telling readers that their property taxes are going to jump by 1152 percent — when it should have read 11.52 percent; or writing a caption for a photograph that was intended for the “Pet of the Week” section, but inadvertently got printed under the photograph of an overweight, middle-aged woman who just won the best female bowler of the year award. The grim look on her face suggests that she’s proud of the award, but being photographed not so much.

If you take into account the tens of thousands of words that are published in each edition of the Tooele Transcript-Bulletin, it’s a major miracle that countless factual errors aren’t the norm. I guess those thousands of dollars we accredited journalists paid to get our college degrees wasn’t entirely for naught.

But in the deadline-driven grind of journalism, one of the most dreaded mistakes a writer can commit is to tell the world that someone is dead, when in fact, they’re not. Which, of course, is exactly what I did in my previous “Out and About” column published on June 20. If you didn’t read it, don’t bother now. In fact, you can skip the rest of this piece and move on with your day.

But if I’ve piqued your interest and you must know, the column was titled “Who needs Machu Pichu when you have Jacob City nearby?” In it I waxed philosophic about my past 30 years of writing, editing and photographing for Transcript Bulletin Publishing. I admitted that my journalism dream job in college was to someday work for National Geographic Magazine, but after 30 years, I discovered that just about everything I ever wanted to do as a journalist has been generously provided by the people and place of Tooele County, Utah. I wrote, “…who needs the Mojave Desert when you have the Bonneville Salt Flats? Chile’s Torres del Paine when you have the Stansbury Mountains?”

I should have stopped there. But I felt compelled to tell about my first day on the job at the Tooele Transcript Bulletin, which involved the flood of 1983 — and meeting then Tooele County Commissioner Charles “Chick” Stromberg for the first time while he worked to save homes from flooding in Erda. I shared about an embarrassing moment I created for myself by asking the man too many dumb questions, and the important lesson he taught me about interviewing.

And then I blew it. Totally blew it. In the third to the last paragraph of the piece, while remembering that defining moment and thanking him for teaching me such a vital lesson, I wrote, “If you knew the late Charles “Chick” Stromberg, who was a Tooele County Commissioner during the 1980s, you could probably hear him say that remark in your mind’s ear.” The late. The late! It’s amazing the amount of power those four letters of the alphabet can invoke when referring to someone.

After Lindsay made her little pronouncement in my office, she got no smile from me. In fact, she later described the look on my face as an unforgettable and disturbing combination of astonishment and pain. More than anything, I just felt embarrassed to the bone.

So you can understand I wasn’t too happy while making the long walk from my desk to the front office to see with my own eyes that Stromberg was very much with us and not otherwise. My thoughts raced with each step. How did I miss that? How did I miss that?!! I could swear that I saw his obituary in the paper a few years ago! If it’s really him, how do I gracefully apologize for something like that? How do I apologize for not being professional and making sure my feeble memory was correct? The eternal optimist I try to be, I began to hope this wasn’t real and instead a cruel and much belated April Fool’s joke by an employee.

It wasn’t. Sure enough, sitting in a chair by the front office’s big window was Stromberg himself. I hadn’t seen him since the late 1980s, and he had become a stately, elderly gentleman. Leaning beside the chair was a cane. As soon as I saw his face and grin, and those blue eyes of Swedish origin, all feelings of embarrassment vanished. I was genuinely happy to see him, and when he said, “You can see that I’m getting close, but I’m not dead yet,” his words didn’t sting. He then told me that he was going to turn 87 in September.

I shook Stromberg’s hand and poured forth a heartfelt apology. He chuckled about the column and being referred to as “the late,” and said it actually made him laugh. I was relieved — and grateful. I sat beside him and we shared a 10-minute conversation that swept across 30 years of memories. Because I was late for an appointment, I asked if I could visit him at his Grantsville home where we could talk more. “Come any time,” he said, without hesitation.

Which I did last week. We sat in his living room and he brought out a large scrapbook that was neatly filled with newspaper clippings, photographs, certificates and other mementos of his time as a county commissioner. I learned that in 1978, he and the late Reed Russell were the first Republicans to be elected to the county commission in more than 40 years. Stromberg won the two-year seat and Russell won the four-year seat (since then the two-year seat has been changed to four years).

“No one was more honest than old Reed Russell,” said Stromberg about his commissioner colleague. “He was always worried about the taxpayer.”

I also learned that after he lost a fifth re-election bid in 1986, he and his wife, Beverly, sold their Grantsville home and for years spent their winters in southern California and summers at their cabin at Scofield Reservoir near Price. In the 1990s, he and Beverly — both born and raised in Grantsville, were high school sweethearts, were married in 1947 and had four children — returned to their roots and bought a home on Apple Street.

They were happy to be back, and with more than 20 grandchildren, there was plenty to do. But after years of struggling with health issues, Stromberg told me that Beverly died in November 2006. He then became quiet and looked at me.

“I want to tell you something,” he said. “Always be nice to your wife, because when they’re gone, it’s pretty lonely.”

We both fell silent for a moment. I thought about my beloved wife of 32 years, and I could tell in his eyes where his thoughts had traveled.

Before we said “good-bye,” he proudly showed me his vibrant, backyard garden of corn, tomatoes and cantaloupe. I could tell that he spends a lot of time there, watering, weeding, nurturing — coaxing the best out of every plant.

I thanked him for letting me come to his home, and for sharing a special couple of hours. And while I drove away, I thought about “the late,” and if I hadn’t made that mistake, I never would have known that Stromberg was very much alive. And I never would have heard his heartfelt words, “Always be nice to your wife, because…”

Thank you, Charles “Chick” Stromberg. Live long and happily, my friend. And yes, I will do my best to always be nice to my wife.