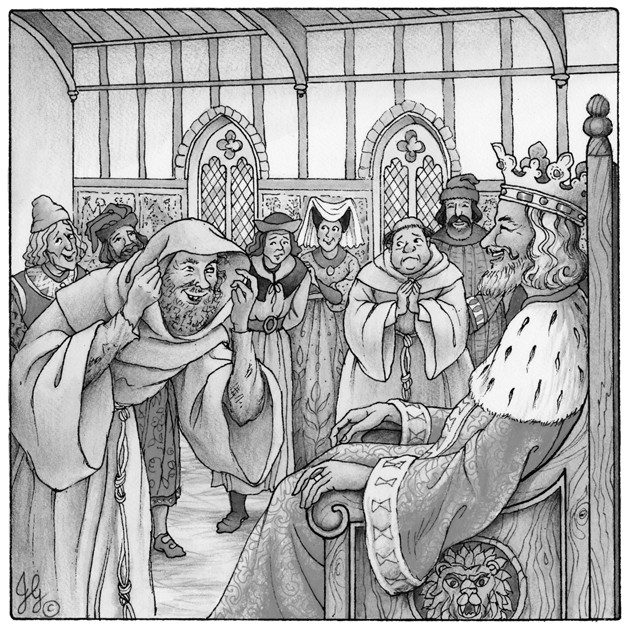 King John ruled England with a ruthless hand. From childhood he had dreamed of wealth and power. The youngest of King Henry II’s five sons, John was his father’s favorite, but he could expect no inheritance. Yet his brothers were rebellious, and John, through treachery, eventually did become king — a grand and greedy ruler.

Not far away the Abbot of Canterbury lived in a magnificent home. Each day one hundred of the abbot’s men dined with him. Fifty knights dressed in velvet cloaks waited upon him. Word of his wealth spread, and when King John heard these rumors, he bristled with fury. “Impossible,” he roared. “No one, no matter how holy, can be richer than the king!” And so he sent for the abbot to appear before him.

With his knights at his side, the abbot came, and King John saw with his own eyes the rich velvet of the knights’ garments, which enraged him still more. “I sent for you, sir, because the king must be the mightiest man in the land, yet you appear to be richer than I!”

The abbot bent to his knees. “Your majesty, everything I spend comes to me from the generosity of the people. I spend money only for the abbey’s sake, never on my own desires.”

King John shook with fury. “Are you saying that I spend money for my own pleasure? I charge you with treason for these words and condemn you to death!”

“You must be punished,” the king shook his head. “But I am a generous man, so I shall spare your life if you can answer three questions.”

“Certainly, your highness, I will answer any questions I am able to answer.”

“Well then,” the king said. “First, where is the center of the world? And second, how soon may I ride around the whole world? And third, what I am thinking.”

The abbot stared at the King. “Surely you jest,” he quavered.

“Never,” King John said. “I do not jest. Go away and return at week’s end to answer my questions. If you cannot, you shall lose your life.” And with these words he turned away.

Shaking with fear, the abbot rode away, and he rode directly to Oxford to seek out the most learned men of the land. Perhaps one of them could answer the king’s riddles.

But no one at Oxford could tell him the answers, and so he set off to return to Canterbury. He was filled with sorrow, but he knew he must say farewell to the monks, for soon he would have to return to the king and give up his life.

As he was traveling, he happened to ride past a poor shepherd tending his flock, and when the shepherd saw the abbot’s face, he asked, “What sad news have you heard?”

“Sad news indeed,” said the abbot, and he told the shepherd all that had happened.

Everyone had heard tales of the king’s temper and his greed, and like many others, the shepherd had thought long and hard about this man. He bowed to the abbot and said, “You need not worry, sir. Sometimes a fool is able to answer what a learned man cannot.”

“What do you mean?” the abbot replied, for he saw the sparkle in the shepherd’s eye.

“Sir, please allow me to go to London in your place. All you must do is allow me to have your clothing to disguise myself, and send your knights along with me. Perhaps I can answer the king’s questions, but if I cannot, surely it is better for a simple shepherd to die in your place.”

“No, no!” cried the abbot, for he could not bear to allow another to suffer for his troubles. “I cannot let you die.”

“I will live then,” said the shepherd. “Simply let me hide my face beneath your cowl. I promise, I will answer the king’s questions.”

After several hours of argument, the abbot finally consented to his plea. So he sent the shepherd off to London wearing his clothing and accompanied by his knights.

When the abbot finally arrived before the king, his face was hidden, and the king shook his head. “I see you are prepared to die,” he said.

The shepherd disguised as the abbot bowed. “I am ready to answer your questions, your Majesty.”

“Where then is the center of the Earth?” the king asked.

The shepherd planted his cane in the ground. “It is right here,” he said, “and if your Majesty does not believe me, you may go and measure the Earth for yourself.”

King John roared with laughter and said, “You are a shrewd man, and that is a merry answer. I accept it. But tell me, how soon may I ride round this world?”

Again the shepherd did not hesitate. “Tomorrow,” he said. “If your Majesty gets up with the sun and rides with the sun until the next morning when he shall rise once again, your Majesty will have ridden round the Earth.”

Again the king was greatly amused. “I did not think it could be done so soon,” he said. “Now tell me, what am I thinking?”

The shepherd bowed his head. “That is easy. You are thinking that I am the Abbot of Canterbury, but…” and he raised his cowl, “you see I am only a poor shepherd, and I come to you to beg you to pardon the abbot.”

“Well done!” the king guffawed. “You have more wit than your lord. You shall become abbot in his place.”

And so the king relented and pardoned the abbot and rewarded the shepherd with riches. To this day, the king’s compliance with his subjects is most fondly remembered in his signing of the Magna Carta, which is considered the cornerstone of modern democratic society.