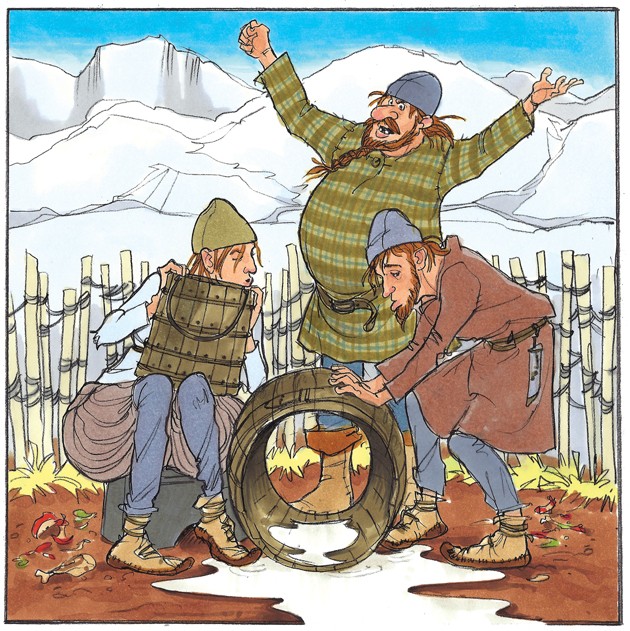 Once upon a time long ago, there were three brothers who lived on a farm near Bakki, in Iceland, a quiet, mountainous part of the world. The brothers were Gisli, Eirikur and Helgi, and they were full of fun and mischief when they were young. Alas, they grew only more mischievous as they grew older, and they did not grow wise. Indeed, people whispered about them; many said they were, quite simply, fools.

Because they were always together, people called them the Bakki Brothers, but they were also known as “Gisli-Eirikur-Helgi” — the names all slurred into one. Strangely enough, they called themselves the same, as if the three were just one person — one great fool!

One late summer day, the brothers set off for southern Iceland to buy a barrel. Each brother filled his pockets with coins, and they began their journey.

Iceland is different from many parts of the world. Not only is it mountainous, but there are few people in the central highlands, and the weather there changes rapidly. As the brothers traveled, despite the season, they discovered the countryside was raw and windy and wild. They came to rivers without bridges, to crevassed glaciers and to volcanoes and merciless seas. But the people they met were friendly and helpful. Many invited the brothers in for a meal, so their spirits stayed buoyant and thankful. And though their trip lasted far longer than they had imagined it might, it was a joy.

When they finally reached southern Iceland, they found the barrel maker, Mr. Fassbinder, who greeted them heartily. He had been expecting them for quite some time.

“We’re Gisli-Eirikur-Helgi,” they said in unison. All those days of travel had brought them even closer together, and Mr. Fassbinder seemed puzzled by this introduction.

“Which one is which?” he asked, but his question only confused the brothers.

“We’re Gisli-Eirikur-Helgi,” they said, and Mr. Fassbinder watched in wonder as they emptied their pockets and altogether counted out their coins.

He scooped the money from their outstretched palms, and presented them with his pride — a great oak barrel, carefully hewn, stave by stave.

“How will you carry it home?” Mr. Fassbinder asked. He saw they had traveled on foot. “It’s a hefty vessel,” he said, staring at their worn and ragged shoes.

“No problem at all!” answered Gisli-Eirikur-Helgi, and before the cooper’s eyes they began to take the barrel apart, stave by stave.

When they were done and the barrel was in pieces, the brothers divided the staves among themselves and packed them in their bags.

“Now we’ll be on our way home,” they said. Mr. Fassbinder tried to speak, but before he could, the brothers had left on their long journey back home.

Just as before, they encountered wonderful people and wild storms, but they remained cheerful, and after a long, long time, they reached their farm.

They unpacked their sacks, laying the staves upon the ground inside their barn, and together, they began to reconstruct the barrel, stave by stave. After a day of this, they stood back and grinned. The barrel was the perfect shape, just right for filling with whey. It was just what they’d wished.

With the barrel standing upright before them, they began to pour the whey inside.

“We’ve done it!” they cried happily, but soon they began to see the whey was pouring out of the barrel, seeping into the earth beneath their feet.

“It seems to have a leak,” said Gisli-Eirikur-Helgi in unison, and so they took the barrel apart once again, and, once again, they put it back together.

“Looks perfect!” they said, and again they poured whey into their barrel, but, once again, the whey spilled everywhere.

“What can be wrong?” asked Gisli, or perhaps it was Eirikur or Helgi. No one could ever be sure.

“I cannot tell,” Eirikur answered, or perhaps it was Helgi or Gisli. But whichever brother it was, he squinted his eyes and stared hard at the barrel, as if to ask, “What’s wrong with you?”

“We’ve been cheated!” Helgi said, or perhaps it was Gisli or Eirikur who said that, but whoever it was, the boys all felt cheated.

And with heavy hearts, they decided they must return to southern Iceland to demand their money back from Mr. Fassbinder.

And so they took apart the barrel once again, and they tucked the staves into their packs, and they set off on their long journey.

When they arrived, the brothers shouted, altogether and in unison, “Mr. Fassbinder, your barrel is flawed!”

But Mr. Fassbinder only smiled, and he held up the bottom of the barrel and the top — the parts the brothers had left behind. “You’ll probably want these to keep your barrel from leaking,” he said, and the brothers nodded happily.

“A wonderful solution!” they cried, and carrying the staves and the top and the bottom of the barrel, they walked back home, though no one is sure the brothers ever put that barrel back together again. After all, few can predict what a fool is going to do.