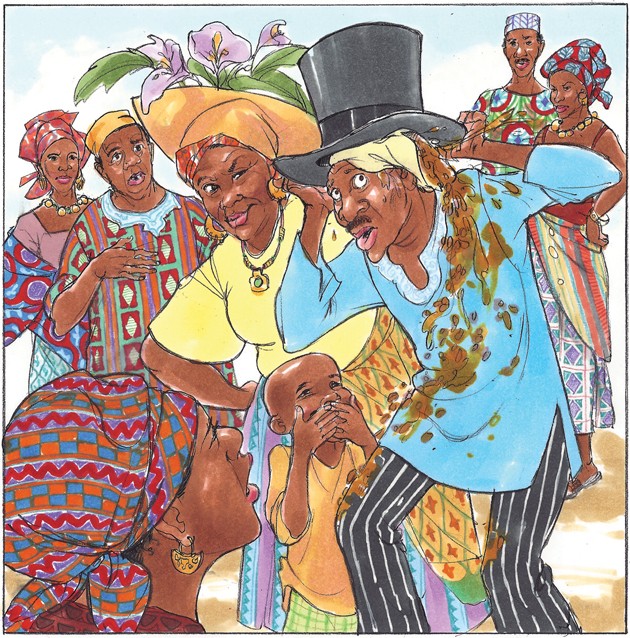 One cool autumn day, the trickster known as Anansi woke up to the sound of his wife, Aso, calling to him: “Hurry up, Anansi. Remember that today’s the harvest party! We’re going to see my family!”

“Ah, yes,” Anansi sighed as he clambered out of bed. But the moment his eyes were wide open, he decided they must dress up in their finest clothes. He was a proud fellow and wanted everyone to know how handsome and successful he was.

Aso loved to dress up, too, so she put on her frilliest dress and shiniest shoes. Anansi wore a fancy suit and a big top hat.

“You look so handsome!” Aso said.

Anansi bowed. “I must say that I do,” he answered.

Anansi, you see, was seldom modest.

When the handsome couple arrived at Aso’s family’s house, all the guests turned to stare. Few had ever seen such a pretty dress like Aso’s. And no one wore top hats like Anansi’s! That top hat was the talk of the party, and Anansi waltzed around the room, showing off his snazzy trousers and his big top hat.

Meanwhile, Aso helped her mother lay out the feast of lemon soup and fried plantain, chin chin and curried corn, sosaties and goat stew, baked yams and black-eyed peas, okra and rice, spiced butter and palm wine. One thing was missing, however, and this worried Aso: There were no hot beans. Anansi loved beans.

“Anansi,” Aso whispered, “there are no beans today.”

But Anansi paid no attention. He walked to the table — already spread with fine food — filled his plate and ate and ate.

Suddenly, he stopped. He needed hot beans! And he knew his father-in-law loved hot beans, too. They had to be somewhere in the kitchen — he could smell them cooking from somewhere.

“Anansi,” his father-in-law called, “come over here. I want to introduce you to my best friends!”

Anansi smiled and waved. “I’ll be there in a moment,” he said. “I just need to step outside to get some air.”

This was a trick. Anansi didn’t need some air — he wanted to find those hot beans. Sure enough, when he walked out back, he found a big pot of beans baking over a fire.

“Why, that sneaky man,” Anansi said to himself. “He’s hiding his beans from me. How dare he try to trick a trickster!”

So Anansi reached into his pocket and pulled out a satchel that he always carried. After all, you never knew when you might find something you wanted! At least, that was Anansi’s motto.

So he began to scoop beans into the satchel, one spoonful after another. When the satchel was full, he heard his father-in-law calling, “Anansi, please come back inside!”

Anansi quickly took the satchel and placed it on his head, hidden by his big top hat.

He walked back inside. “Hello, everyone,” he called. “I’m sorry, but it’s time for us to leave.” Anansi was eager to get home and take those hot beans off his head and eat them.

“Anansi!” Aso hissed. “What are you doing? We can’t leave yet — the party’s just beginning.”

Meanwhile, her father said, “Everyone gather around. I want you all to meet my son-in-law Anansi.”

Anansi wilted a little bit. Those beans were hot. But his father-in-law held him by the arm and said, “I just want everyone to know this fine man who is so good to my daughter and so very good to me. We’re here to celebrate my fine son-in-law!”

“Thank you very much,” Anansi said as he pulled his arm away. His head was beginning to sweat. Beads of sweat were running down his forehead now.

“Don’t leave, son!” his father-in-law said. “Everyone wants to get to know you.”

All the guests began to clap, but Anansi’s head was burning up and sweat was pouring down his face. “Thank you very much, but we must be on our way,” he pleaded.

“Don’t be silly, Anansi, there aren’t enough fine words in the language for praising you!” his mother-in-law explained.

But Anansi was in pain. He lifted his hat to let in a little air, and when he did, those beans began to spill out of the bag, down his head, over his fine shirt, handsome trousers and tie, all the way down to his sandals.

“What’s this?” his father-in-law cried. “You’re a thief! My son-in-law is a thief who is stealing my beans!”

“Thief!” the others cried.

Anansi grabbed Aso’s hand and pulled her out the door, and he ran like the wind.

Now everyone knew that Anansi was a thief who could not be trusted. Anansi wasn’t the fine fellow in the big top hat — Anansi was only a trickster.

Those hot beans burned all the hair right off Anansi’s head. Ever since that day, he’s been bald — a symbol of his greed.