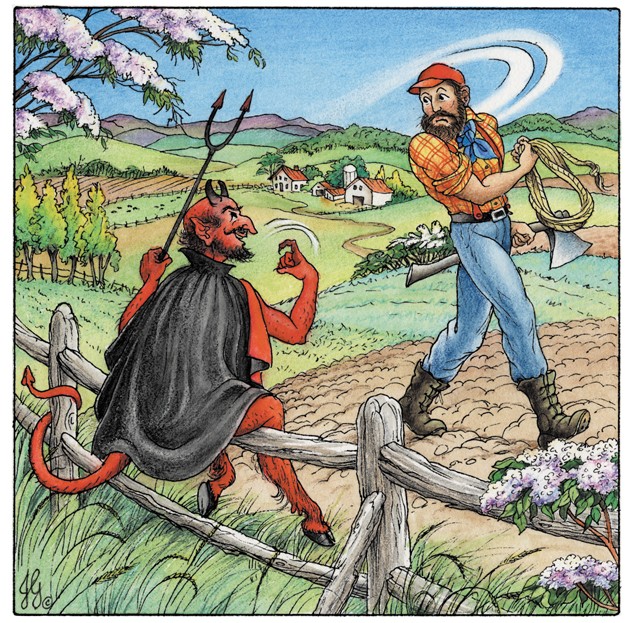 People can argue about this, but here’s the truth: Bill Greenfield was one of the biggest liars in the whole wide world.

There’s another kind of liar, a special kind, the kind who’s impossible not to like. And that’s the liar who lies so well, he can call you any time of day or night. He can call you in stormy weather, in the dead of winter, in the high heat of summer. He can call you and say, “Hey there, c’mon outside and let me tell you something,” and no matter what — no matter if you’re in the desert and it’s summertime at high noon; no matter if you’re in the snowy mountains in the dead of winter and the winds are howling; no matter if it’s midnight and you’re tired and all you want is sleep — you’ll run outside to hear what that fella has to say.

Bill Greenfield was that kind of liar. He was a logger up in the Adirondack Mountains — or at least that’s what he said. People say he was as big and brawny and bold as Paul Bunyan; that he could outhunt and outrun and outfox every other fella; that everything he did was, well, amazing. For example, once he was hunting, and a big brown bear came lumbering toward him, so he hid behind a tree and bent his gun around the tree and shot the bear.

That’s what he said, anyway.

It was freezing cold that day, or so the rest of the story goes. The morning was so cold that when Bill woke, he had to pound the frozen air with his hammer just so he could breathe it. Most of the time the other fellas in the lumber camp would take their big saws to the air, but on that particular morning the wind was so fierce it knocked out all the teeth in every saw.

That day when Bill got home he built a fire to warm his toes. The cold was so intense, however, that when fire rose up through the chimney, it froze right there at the top. Pretty soon the whole house was filled with smoke; and because the frozen fire was blocking the chimney, Bill had to climb up there and chop down the fire.

Another day that winter, Bill was out hunting again. After a while he became so cold that he went to a cave to thaw and play his harmonica, which was something he liked to do. But the air was so cold those notes just froze right where they were, and pretty soon Bill gave up on that.

The following spring, he was out walking. Just as he passed that very same cave, he heard some harmonica music. “That sounds like me,” Bill said, and he stopped and listened. Then he understood: Now that it was springtime and everything was melting, those notes he’d played in winter had thawed, and they were whirling around in the air. It was a mighty pretty sound, to be sure.

Bill Greenfield told another story, too; it was about the day he beat the devil.

It was summer — a steamy, hot day — and Bill was walking in his father’s fields when all of a sudden he heard someone say his name. It was the devil, sitting on a fence, twitching his tail and holding a pitchfork.

The devil was looking for Bill, because the devil likes liars, and word had spread that Bill was one of the finest.

So the devil got up and bowed to Bill and said, “Bill, I’ve come to take you with me.”

Bill stopped in his tracks, just staring at the devil. He wasn’t ready for this. And amazingly, Bill started to cry. These were serious tears he was crying — he was, after all, a big man. And he had never before cried, so these tears were huge.

Bill didn’t want to go with the devil.

The devil couldn’t believe his eyes. It’s unusual to see a man as big and brawny and bold as Bill standing there, weeping.

But the devil slowly started to soften just a little, and at last he said, “I’ll tell you what, Bill, I’ll make you a deal.

“What kind of deal you offering?” Bill sniffed.

“If you can find something I cannot do, I’ll let you go,” the devil said. “Then you can stay and entertain all the folks in the Adirondacks with your lies.”

It was true; people around those parts liked to listen to Bill’s tales.

So Bill stopped crying, and he considered it. You have to think about deals with the devil. Finally he saw a tree not too far away and walked over and pulled it right out of the earth.

Then he looked at the devil and said, “Can you do that?”

The devil cracked a devilish grin and replied, “Sure can.”

Naturally the devil could. And he did.

But Bill wasn’t afraid. No sir. Bill hadn’t been raised to be afraid of the devil, so he looked the devil square in the eye.

“OK, then,” Bill said. “Can you find a bigger liar than Bill Greenfield?”

And that was it. He had the devil on that one. There wasn’t a bigger liar anywhere.

It was the devil’s turn to sit down and cry, for the devil understood he’d been outdone. He said, “Go on, Bill Greenfield. You’re free of me. There’s no bigger liar in the whole wide world than you.”