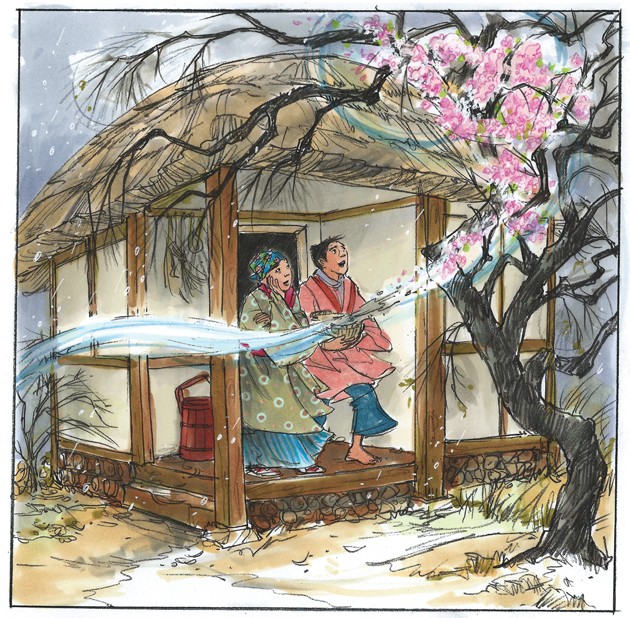 Once upon a time, a man named Isamu and his wife, Ai, lived with their little white dog. They loved their dog as if he were their child. One day, the dog began to bark madly, scratching at a spot in the backyard. Isamu and Ai could not imagine what was so upsetting and decided that they must find out. They dug a hole in the earth where the dog was scratching. To their amazement, they found a box filled with gold.

Next door there lived a greedy man, and he was watching as Isamu dug up the treasure. The next day he decided he must borrow the dog. And so he knocked upon their door and said, “I need a guard dog for the day. May I borrow yours?”

Isamu did not much care for his neighbor, but he was too kind to refuse, and so the neighbor carried the dog to his home. There the neighbor put him in the backyard and said, “Now, find a treasure for me!”

The dog stared at the wicked man, and soon he walked to a tree and began to scratch. The neighbor dug a hole in the ground where the dog was scratching, but he found only garbage there. He was so furious that he struck the dog with his shovel, and the dog died. He buried the dog in the hole.

When Isamu knocked on the neighbor’s door the next morning to ask for his dog, the neighbor shook his head. “I’m sorry, but your dog died, and I buried him in my backyard.”

Isamu was so heartbroken that he could barely speak. “Please, let me see his grave,” he said, and the neighbor led him to the backyard. When Isamu saw the tree beneath which his dog was buried, he said to the neighbor, “Let me cut a branch from this tree to make a memorial in his honor.”

The neighbor could not refuse, and so Isamu cut off the branch and carried it home. There he carved a mortar and pestle, and he said to Ai, “We shall make rice cakes in honor of our dog.”

Their dog had loved to eat rice cakes.

And so they put rice into the mortar and pounded it with the pestle until it was soft. To their amazement, before their eyes, rice cakes began to tumble out of the mortar. These were more delicious than anything they had ever tasted.

“They are as sweet as our beloved dog,” said Ai. “We must share them with our neighbor.”

When they took the cakes next door, they told their neighbor of the magical mortar.

“May I borrow it?” the neighbor asked.

Isamu did not wish to lend it, but Ai said to her husband, “Do not be selfish,” and she handed the mortar to the neighbor. “Return it when you are finished,” she said.

The neighbor poured rice into the mortar, but when he pounded it, nothing happened, and he was so furious he burned it in his fireplace.

When Isamu came to fetch the mortar, the wicked man said, “I burned it.”

Isamu nearly wept. “It was a memento for my dog,” he said. “May I have the ashes, please? They will help us to remember.”

The neighbor could not refuse, and so he collected the ashes in a basket and handed them to Isamu.

The next morning, when Ai opened the front door, the winter wind blew some of the ashes outside, and as they drifted onto the bare branches of the cherry trees, they suddenly burst into bloom. This was miraculous, for it was wintertime, and terribly cold, but suddenly the backyard was blooming as if it were spring.

Soon word spread of the beautiful cherry trees of Isamu and Ai.

“No one has blossoming cherry trees in wintertime,” people said, and so they began to visit to see for themselves. Soon word had spread all the way to the palace of the king.

Now the king loved cherry blossoms, and he sent his samurai to discover the secret.

“Can you make the king’s cherry trees bloom?” the samurai asked Isamu.

“I can try,” Isamu said, and he and Ai traveled to the capital city, bringing along their basket of ashes. They walked into the palace garden, and Isamu tossed ashes into the bare boughs of the trees. They burst into bloom.

The king was overjoyed and he honored Isamu and Ai with a title, “They Who Make Withered Trees Bloom.”

He paid them handsomely.

When the wicked neighbor heard this news, he gathered ashes from his fireplace and traveled to see the king. “I, too, make trees blossom,” he announced to the samurai, and so the samurai took him to the king.

“I am the teacher of the man who made your trees blossom,” the wicked neighbor said. And so the king led him to another garden where the tree branches were bare.

The neighbor tossed his ashes onto the branches, but nothing happened.

“You are not the great man’s teacher!” the king said. “You will be punished for your lies,” and he sent the wicked neighbor to prison.

And as for Isamu and Ai, they lived happily ever after, always surrounded by beautiful blossoms, even in the deepest, darkest winter days.