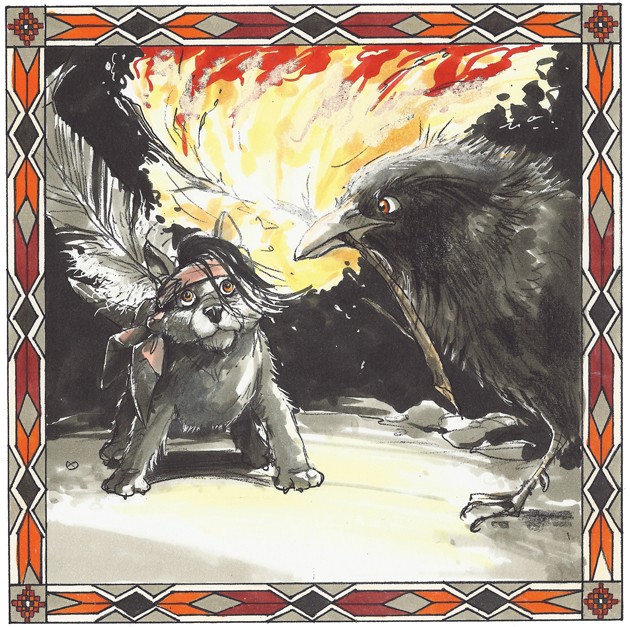 Long ago, the Apache Indians were traveling south, and they had only seeds to ground into flour for feed. One evening, a raven flew into their camp carrying a bow and arrow. As the raven approached one of the tepees, he hung a piece of meat onto the poles.

Inside, two children were alone, and when they smelled something delicious, they peered out and saw the meat. They pulled it down, ate it, and instantly they grew fat.

When their parents came home and saw their fat children, they called all the people to see. Everyone gathered to marvel at the happy children, and the boy told them of the raven’s gift.

The people longed to find more, so they sent a bat in search of the raven.

A group set out in search of the raven’s home. They walked for days, and on the evening of the fourth day, they came to a stack of logs at the foot of the mountain. Many ravens circled the pile, and as the people walked closer, the ravens flew away.

The medicine man came up with a solution and transformed one of the boys into a puppy.

“Hide in the bushes near the ravens’ camp,” the medicine man said. “We shall move away, and you will stay and watch what happens.”

This is what the boy did.

In the morning, one of the young ravens found the puppy hidden in the bushes and cried excitedly to his parents, “I have found a puppy! He must be mine.”

The raven’s parents were not impressed. “Throw it away,” they said. “This cannot bring us anything good.”

But their little one begged and begged.

“I promise I will give the puppy up if he winks when I wave burning wood before his eyes,” the young raven promised, and so his parents agreed.

Naturally, the puppy understood. So when the raven waved the wood before his eyes, he did not blink.

And so he was allowed to stay.

The puppy watched as an old raven brushed aside the ashes, lifted a large stone from the earth, and disappeared into the hole beneath that stone. When he reappeared, he was leading a buffalo. The ravens killed the buffalo and cooked it over the fire. Then they gathered around to feast on it.

For four days, the puppy stayed in the ravens’ camp. Each evening, he watched the same thing, and now he knew the source of their food.

On the fourth night, he waited until all the ravens were asleep, and following the medicine man’s directions, he resumed his human shape. Then he brushed aside the ashes, lifted the stone and found the opening to the underworld.

When he came to a line of buffalo, he said to the first one, “Follow me and you shall be the king of all the animals.”

The buffalo began to follow him, leading all the others out of the underworld. But it was not just buffalo that followed the boy. Behind them came every other animal, too.

As the last of the animals passed through the hole, the ravens woke. The eldest raced to the hole and tried to cover it with the stone, but he was too late.

And so the boy led the animals toward his people, following their tracks. But when he reached his people’s camp, he found it abandoned. He picked up a fire stick and said, “When did my people leave this place?”

“Three days ago,” the stick answered. “They traveled west.”

The boy and the beasts walked on until they reached the next camp. This, too, was abandoned.

“When did my people leave?” he asked the ashes left in the fire pit.

“Two days ago,” the ashes answered.

On walked the boy and the beasts.

At the third camp, also abandoned, he asked another fire stick, “When did the people leave?”

“This morning,” came the answer.

And so the boy hurried on. That evening, just as the sun began to set, he reached a brush lodge where one of the tribe’s women lived.

As they approached, one of the deer leaned forward and began to eat the woman’s shelter.

She ran outside and struck the deer’s nose with a fire stick. Ash stuck to the creature’s nose, the white mark that remains to this day.

“From this day on,” the woman said, “you will avoid humans, and your nose will tell you when we are near.”

And the animals ran away. That was the end of the harmony between man and beast.

From that night on, the Apaches prayed for the animals to return. But ever since that day, animals only approach the people’s camps at night. They seldom come close. They are guided by their sense of smell.