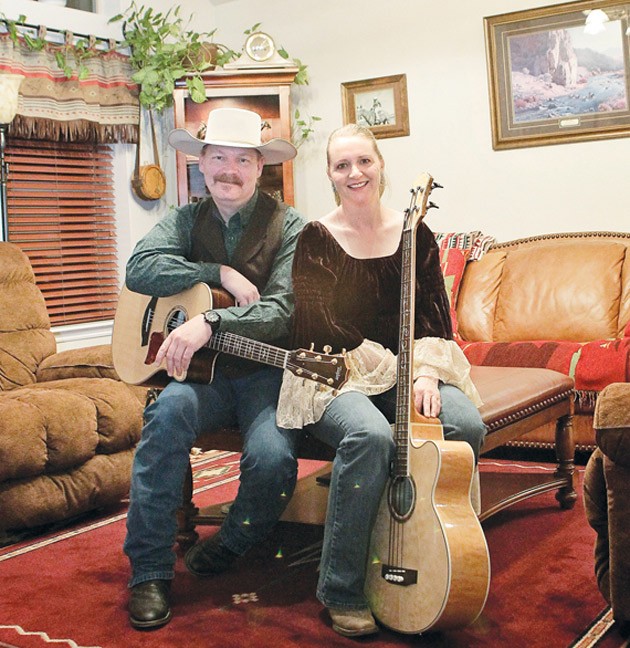 J.C. and Sonja Needham sit with their guitars at their home in South Rim on Jan. 9.

J.C. Needham, 48, was eating out with his wife Sonja, 47, and their friends when the call came.

“This is Steve Hall,” the caller said. “I’m Shotgun Red.”

Shotgun Red was calling to invite the South Rim couple, a Western music duo also known as The Buckaroo Balladeers, to perform Feb. 15 on the Shotgun Red Variety Show.

Sonja mouthed, “Get off the phone,” but when J.C. scrawled “Shotgun Red” on a napkin, Sonja’s eyes got big and she shushed the table.

“He’s on the phone with Shotgun Red,” she whispered to their friends.

The mainstream public might not know the puppet who hosts a country variety show and bears a resemblance to Willie Nelson, but his weekly audience of 1.5 million people on Rural Free Delivery TV does.

The Buckaroo Balladeers will fly to Nashville, where they will tape Manti-artist Mary Kaye Knaphus’ duet “Homeward Bound” Feb. 15. The episode will be filmed on the General Jackson Showboat docked near Opryland, and will air July 4, 5 and 7, and again in six months on channels 345 on Direct TV and 321 on Dish Network. While there, they’ll also record a song J.C. wrote in 2008 called “Lookin’ Back” at the Ryman Auditorium where the Grand Ole Opry originated.

Their music belongs to the Western genre. J.C. said unlike country singers who croon that “my dog died, my wife left me, I’m in a bar drinking,” western music is about the west.

It’s a musical road that started with J.C. playing in bands since he was 16 and the couple’s romantic meeting in Sonja’s native Germany in the early 1980s. Then two years ago, J.C.’s singing career went from solo to duo with The Buckaroo Balladeers.

J.C. was stationed in Germany from 1982 to 1984 with the U.S. Army when he met Sonja at a “guest house,” where cowboy G.I.s hung out to listen to country bands. Sonja was there with her uncle Rudi, who played guitar in a band.

Sonja lived 80 miles away in Birnthon, a town surrounded by forest and so small that it would fit in South Rim. At the edge of town, they had a Western club.

“We had a western town set up,” Sonja said. “We would meet there and dress up like cowboys. Everyone had guns, wore spurs and holsters. That’s how I got interested in horses. I always thought, ‘This is so cool.’”

In contrast, J.C. was the real deal. He grew up in southern Indiana cattle ranching with his uncle and granddad. He competed in rodeos and grew up listening to cowboy music.

In that crowded guest house nearly 30 years ago, midnight arrived. J.C. had spent the entire evening listening to the music, not dancing with anyone.

“It was pretty comical,” J.C. said. “The music was really good, but it had an oom-pa-pah sound, like the polka.”

Then Merle Haggard’s song “Silver Wings” came on. The song was about flying away on an airplane and leaving your girl behind —∏the G.I.’s theme song that was a sure recipe for homesickness.

“I looked across the dance floor,” J.C. said. “All I could see of Sonja was her long, blonde hair.”

He could also see five guys getting up to ask her to dance.

“To get to her I was diving over tables, chairs and banisters,” he said. “I leaned over her shoulder just as the five guys got there, and asked her to dance.”

Sonja looked at J.C. and thought, “Wow, he has a nice hat.” Meanwhile, J.C. gazed into her green eyes and was a goner. Over the next several weekends, he hung out with Sonja, watching her uncle’s band whenever he could, even paying others to take his duties.

“The first time she invited me to her house, she had a Chris Ledoux album,” J.C. said. “I was a Chris Ledoux fan before people knew him. He had a cult following of cowboys. I thought, ‘Well, I traveled 7,000 miles to a foreign land. I met a girl that likes Chris Ledoux. She rides horses, even though I had more leather in my boots than the English saddles she rode. Somebody’s trying to tell me something.’ Six weeks later, I knew she was the one.”

After they married, they moved from Indiana to Tooele in their late 20s.

“We wanted to have a ranch out here,” he said.

Today, they live on 2.5 acres in South Rim with three horses.

Five years ago, J.C. ramped up his solo singing career, cutting CDs. When he was recording his last CD in 2009, he asked Sonja to do a few background vocals.

“She was very shy and reluctantly went into the studio with me,” J.C. said. “From the very first note, the engineer said ‘she’s fantastic.’”

She sang some harmonies, but then early 2010 rolled around.

“I was getting things ready for a performance,” J.C. said. “She said, ‘I don’t think I want to go.’ That week, I bought her a bass guitar in Salt Lake. I told her, ‘I would really like for you to play bass. It would make it so much better, honey.’”

Sonja took a genuine interest in trying to play the bass. Within less than a year, she was performing on stage with J.C., singing background.

Sonja picked a song about the old Pendleton Roundup Rodeo called “Yakima,” by Juni Fisher. She performed it Memorial Day 2012 at the Cowboy Legends Gathering at Antelope Island.

For years, Sonja had been a closet singer, singing to Patsy Cline and Loretta Lynn home alone while walking on the treadmill. Could she do it in front of an audience?

“It made me feel like I was singing in front of a familiar person,” Sonja said.

After she sang, she got a standing ovation.

“She was so nervous,” J.C. said. “When she was done, she turned to me and missed the ovation. I stood there prouder than a peacock.”

From then on, Sonja came out of the background, taking a prominent place in the musical duo.

“It’s a different person going in front of the audience,” Sonja said. “I have to be, or I would run.”

With their day jobs, they practice three evenings a week. Their 50 performances a year take them to Montana, Arizona, Colorado, Nevada, Utah and Idaho. They also perform at private parties.

Their Nashville stint caps an amazing two years as The Buckaroo Balladeers. In October, J.C. submitted their press packet on a lark to the variety show, so he could say they were rejected by a puppet. Instead, they’ll pack their guitars and go to America’s country music capital.