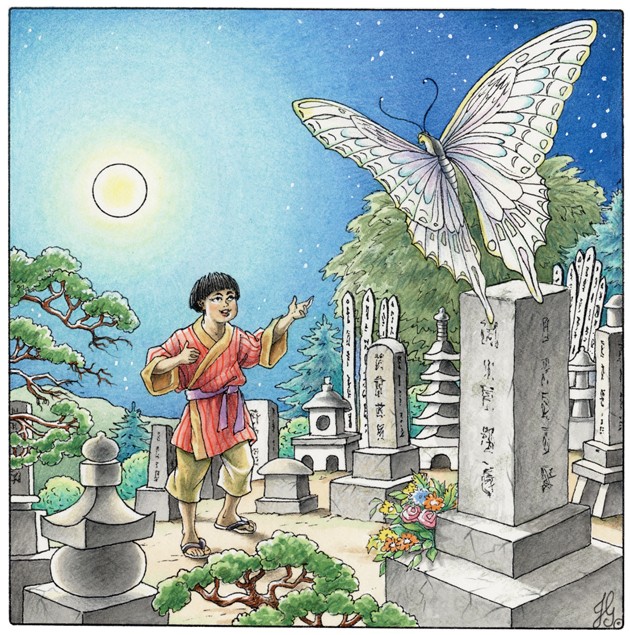 Long ago a wealthy old man named Hikaru lived in a village in Japan. Hikaru’s house stood just beyond a cemetery. He lived surrounded by a beautiful garden. Hikaru was polite and elegant, never unkind, but he had never married. He lived alone; he seldom ventured out into the village, and his neighbors gossiped about him.

“He’s a strange one,” the women whispered. “So self-absorbed. Too selfish to marry, it seems.”

“He must be mad,” the men muttered.

In this way, something that was not true appeared to be. Hikaru was far from mad. He was, simply, sad. Many years before he had loved a girl named Akiko. She was beautiful and kind, as lovely as the summer wind, as sweet as springtime pears. Hikaru lived every day longing to see her, and each time he did, he felt as if he were celebrating. He could not wait until she was old enough to marry. He dreamed of the life they would live together.

But one day, when she was still a teenager, Akiko became sick, and sadly, she died.

Hikaru moved into the house behind the cemetery where she was buried. Forever after he thought only of her. Every day he walked to her grave. Every day he prayed. He took flowers to the grave. He lived in his memories of the days when he had been happy.

Time passed. Nearly everyone who had known the story had grown old, and after a while, few remembered Akiko. That is when the false stories began to spread. That is when the children of the village began to believe Hikaru was mad. They took care not to walk too near him, and when they had to pass by his house, they ran as fast as they could. When they saw him in the shops or on the street or in the market, they hurried away, whispering behind his back.

There was one boy named Kyoshi who had such a pure spirit that he never believed rumors. Kyoshi only wondered at this man who looked so sad, and he longed to see him smile. Some days he walked past his house and waved, hoping Hikaru would see. But he never did.

One year, just after midnight on New Year’s Eve, Kyoshi dressed up and prepared himself to go make Hatsumode, the first trip of the year to the temple. There he planned to pray for good things in the coming year.

Just as he was about to enter the temple, he saw something that took his breath away. The air outside was cold, the wind was brisk, the moon was bright, but there at the door to the temple hovered a white butterfly, its wings shimmering brightly.

Kyoshi gasped, “How can you be here in wintertime?”

The butterfly flew away, and Kyoshi hurried home. When he rushed in the door, his mother stared at him. His hair was mussed, his cheeks were red with excitement and exertion, and he was out of breath. “My son!” she cried. “What’s wrong?”

“You’ll never believe this,” he explained, trying to catch his breath. “I wouldn’t believe it if I hadn’t seen it with my own two eyes. There was a white butterfly outside the temple.”

When his mother heard this news, she too lost her breath. “Are you certain?” she asked.

His mother took his hand. “Come, we must go to see Hikaru.”

Kyoshi was very curious. He had never heard his mother speak of Hikaru, and he could not imagine why she wanted to go there now. Perhaps she only wanted to wish the old man a Happy New Year, but why? And what did that have to do with the butterfly?

“Why, Mother, why?” he asked as they walked toward the cemetery and beyond, to Hikaru’s house.

“Wait, we shall see,” his mother shushed him.

They knocked upon Hikaru’s door. After a long wait, they heard footsteps slowly approaching. When at last the door opened, Kyoshi gasped. Hikaru was as pale as a ghost, so thin and frail it seemed he would fall to the ground any moment.

The poor man was dying, and as soon as he lay down, he appeared to fall asleep. But just at that moment, to Kyoshi’s amazement, the white butterfly appeared in the room. It hovered over Hikaru, and Kyoshi tried to brush it away.

“There it is!” he cried to his mother. “The butterfly!” Again he brushed at it with a fan, but the butterfly only swooped around the room and once again flew to the bed. There it landed on the pillow beside Hikaru’s head.

Once again Kyoshi tried to brush it away, but once again it returned. This time, determined to keep the poor old man from discomfort, Kyoshi opened the door, swatted his fan at the butterfly and guided it outside.

The butterfly flew toward the graveyard, and Kyoshi chased after it.

Kyoshi crept close and brushed his hand over the writing on the stone. He squinted and made out the name. (begin itals)Akiko(end itals). “What are you doing here?” he asked the butterfly.

But a moment later the butterfly had vanished.

Mystified, Kyoshi returned to Hikaru’s house. “Mother,” he said as he raced inside, “the butterfly disappeared.”

He saw his mother was weeping. “Hikaru has passed away,” she said.

Kyoshi’s eyes widened. “And the butterfly is gone,” he said. “Mother, there is a mystery here …”

His mother took his hand and told Kyoshi the tale of Hikaru’s love. She had heard the story when she was young, and then she had forgotten it. But the moment she heard of the white butterfly’s appearance in winter, she remembered.

“Akiko was the love of his life,” she told Kyoshi. “But it has been 50 years since she died. On the day she died, Hikaru vowed he would never marry, and as you know, he kept his word. I wish I had not forgotten.”

Kyoshi listened, and tears fell from his eyes. “He was never mad,” he said softly.

His mother shook her head. “No, he was only devoted.”

“And that butterfly was the ghost of his Akiko,” the boy said, bowing his head. “And now they will be together. What a good New Year’s gift.”