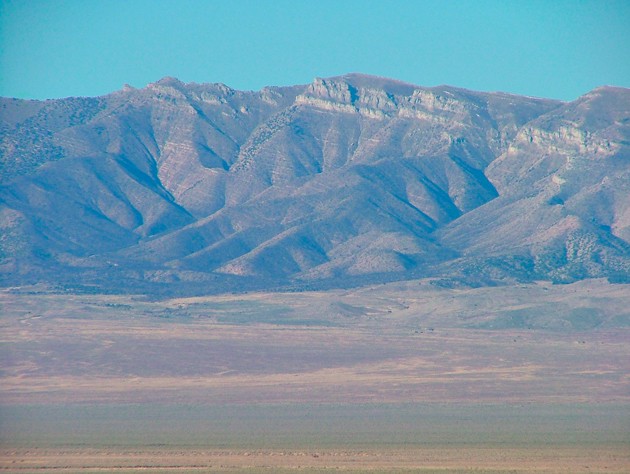 Cedar Peak as seen from the Horseshoe Springs area.

January 16, 2014
The Cedar Mountains: For a hike where you won’t see another soul

Along the western edge of Skull Valley is the un-populated and seldom visited Cedar Mountain Wilderness Area. From almost any location in Skull Valley, the Cedar Mountains are a prominent feature in your field of view.

Even though they are relatively low in elevation (their highest summit, Cedar Peak is only 7,712 feet in elevation), they are a fascinating bunch of mountains. The Cedars are the first real barren range of the Great Basin west of Salt Lake City, and are nothing like their high neighbors to the east — the Stansbury Range.

This area is still as empty as it was back in the 1800s, maybe even more so now since the bison are gone. When you are in the vicinity of Iosepa, Cedar Peak is due west and can be identified by the large band of cliffs that begin near its summit and trend down towards the north on a slant.

If you are looking for an adventure or hike where you will not see another person along the entire route from valley to summit, you have found it in Cedar Peak.

To get there, take exit 77 off of Interstate 80 and follow state Route 196 south to about a mile beyond Iosepa. A sign on the right/west side of the road will announce the California Trail. If you look west from this point the view west is desolate and empty — but pretty in its own right.

The tan blanket of cheat grass on the valley floor gives way abruptly to the dark green of Utah Junipers or “Cedars” as the Pioneers and locals call them. The junipers in turn give way to the pale gray limestone of the cliff faces. Turn right on this road and follow it west across the valley through sand hills, playa, and sagebrush nearly to the foot of the mountains.

Out in the middle of the valley the road splits with one branch heading northwest. Stay to the left and head southwest towards Eight Mile Spring. After several miles, you will arrive at a brackish spring below a small rock ledge with a decent flow of water coming out of it and surrounded by various grass and bushes. This is Eight Mile Spring.

At Eight Mile Spring the roads diverge. One heads north around the small pond of the spring and follows the edge of the mountains towards Redlum Spring area. The other road heads south and skirts the base of the mountains. Take this road and head south from the spring a ways to where a two track heads east off the better traveled road towards the higher peaks. This road will follow an old wash up behind a low north/south trending ridge that is separated from the bulk of the highest peaks.

The road gets pretty rough and peters out. Park along this stretch somewhere and make sure you chalk your vehicle. The way I chalk a vehicle out in the hills is to take a couple large rocks and put them in front of my back tires on the downhill side. This will prevent your vehicle from rolling down the hill if your park brake fails.

From the car park on the small ridge, you descend a small gully and then you just pick the most likely approach to the high country and head for it. There are no established trails in the Cedar Mountains, which is what attracts me to them. This area is now part of the Cedar Mountain Wilderness Area and it is a place where you can, literally, get away from it all.

The last time I climbed Cedar Peak it was about this time of year a few years ago. I made it to the car park, descended the gully and then followed a southwest facing finger of land that was free of snow as far as I could. At that point it was time for snowshoes. I continued up the ridge, spooked several rabbits, and noticed a group of seven mule deer across the ravine.

It was completely quiet within the junipers and while it was a sunny, clear day, it was cold. Luckily for me there was no wind. As I made my way up the ridge, the crunch of my snowshoes breaking the frozen crust of snow was the only sound, and it loudly cut the silence.

I gained elevation quickly via my direct route and after awhile, arrived at a tortured shelf of ancient limestone cliffs and rock towers. It took me a minute to find the best way to reach the crest of the range and there was an area where I had to wedge myself up between some rocks to get to the top.

Hiking or climbing on limestone can be a dangerous thing. It is rough and sometimes sharp and can cut you like a razor. Be sure that you have a good pair of leather gloves and boots with you if you tackle any of these cliff bands.

Once on the summit, I had amazing views in all directions. To the west, I looked upon mile after mile of sand dunes, the vast expanse of the Great Salt Lake Desert, and Pilot Peak on the other side of the desert.

Back in the early 1840s, John C. Fremont and his exploring party, crested the Cedars somewhere between this summit and Hasting’s Pass to the north and looked upon a similar scene. Fremont’s party rested several days in the vicinity of where Iosepa is today and gathered strength for the crossing of the desert. The plan was for several men to cross the desert first, heading directly for Pilot Peak in order to find water.

If they were successful, they were supposed to build a fire that would signal Fremont and the rest of the party to proceed. Several days passed and Fremont feared his men were lost. But eventually a small trail of smoke was spotted at the base of the mountain far across the desert and Fremont and his party made the brutal crossing.

I thought about this for a spell as I sat on a chunk of limestone on top of Cedar Peak. The desert was a bit hazy, but the air here was clear and the un-named peaks south of this one looked pretty in the winter sun. When I turned my gaze east, 11,031 foot  Peak in the Stansbury Range looked enormous by comparison rising up from Skull Valley.

I ate my lunch, negotiated the cliffs and rocks, and then descended the peak at a pretty good pace and was down before sunset. One way distance to the top was only a couple miles, but the elevation gain was just over 2,000 feet. This is a short, challenging hike and should only be attempted by those who are comfortable in places where there are no roads or trails.