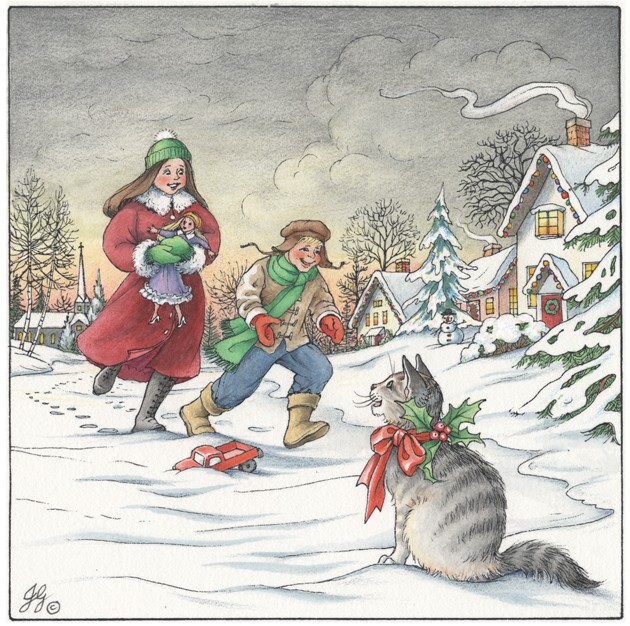 One morning in a small town in Ontario, Canada, Melissa and her brother, Joe, were walking home from church. Melissa was wild with excitement. It was nearly Christmas, and the snow was high and still falling. Melissa loved Christmastime more than anything else in the world.

But most of all, Melissa and Joe loved Christmas gifts.

Melissa and Joe lived with their parents in a big house high atop a hill overlooking the town. Melissa thought Joe knew everything there was to know, and this year Joe had a brilliant idea. At the very top of their Christmas gift list, just above the books and games and toys they asked Santa to bring, Joe had requested a kitten. “We’ll name him Santa. Or Rudolph,” he said. “He’ll sleep with me.”

“But it might be a girl,” Melissa argued. “We can name her Mary, and she can sleep with me sometimes.”

“Maybe,” Joe teased. He loved his sister and most of the time he shared with her.

Both children stopped walking, and suddenly everything was silent — no boots crunching snow. They both heard it distinctly — a loud meow coming from an alley. They ran toward the sound. They stopped and gasped at the sight. Right in front of them, sitting in the snow, was a small, gray kitten with a piece of holly and a red bow tied around its neck. The kitten was staring up at them.

“It’s our kitten!” Joe cried excitedly, and he dashed toward the creature, hands outstretched. But before he reached it, the kitten scampered down the snowy alley.

The kids tore after it. When the kitten climbed through a hole in a fence, the kids climbed over it and leaped to the ground on the other side.

They gasped again. Behind that fence stood a row of dilapidated houses, and the children watched as the kitten scrambled up the front steps of one of the saddest looking houses, a house with peeling paint and wind-battered shutters, broken window panes and wobbly steps.

The kids ran right up those steps, but when they reached the slanting porch, they saw the kitten was gone.

Joe did, and a tired woman with dark circles beneath her eyes opened the door.

The woman held a baby, and a little girl about Melissa’s age stood by her side. The girl’s dress was ragged.

Melissa peered inside, searching for the kitten.

“Can I help you?” the woman asked.

“Um …” Joe began. He was embarrassed because he had noticed the scraggly little Christmas tree with paper ornaments, and just one box wrapped in brown paper beneath it. There were no lights. There was no Christmas pudding. And there was no sign of the kitten.

Just then a little boy about Joe’s age appeared at the bottom of the stairs. He waved hello. “I’ve seen you at school,” the boy said. “You’re the rich kid who lives on the hill.”

Joe shushed her. “Sorry,” he said. “We saw your kitten in the alley, and we wanted to make sure it made its way home.”

The woman looked confused. “We don’t have a kitten,” she said.

“Sorry,” Joe said, and he quickly took his sister’s hand and turned to leave. On the walk home, he didn’t say a word, and neither did Melissa. She knew that when her brother was quiet, he was thinking hard.

“No kitten,” Melissa whispered, but Joe smiled a mysterious smile.

“I think I know where we can find the kitten,” he said, and he whispered something to his parents.

They smiled broadly and his mother walked to the kitchen and returned with a great big hamper filled with food. Joe began to pack the hamper with toys and treats, and he turned to Melissa and said, “Come on, we’re going somewhere.”

Dressed in snowsuits and boots and mittens and hats, Melissa followed her brother outside and around one corner and another and through that alleyway where they first saw the kitten. Then they climbed the fence and soon they were standing on the stoop of that dilapidated house.

This time when the woman answered the door, Joe handed her the hamper. “Merry Christmas,” he said. “My sister and I wanted your family to share the holiday with ours.”

The boy and girl stared in wonder and yelped with delight at the sight of the wonderful presents. The woman smiled so wide, all her sadness seemed to go away. “That’s so very kind of you,” she said.

And as he and Melissa walked home, he explained. “That kitten we saw was no ordinary kitten. That was the Christmas kitten, and it came to show us that giving to those in need feels even better than getting stuff. I don’t think I’ve ever felt so happy. What about you?”

Melissa’s smile said it all. When she thought of that little girl and her joy at the sight of the dolls, she felt so warm inside, she wanted to sing. She remembered her minister’s words: “It is better to give than to receive.”

Her brother really did know everything. He made her so happy, she wanted to sing.

And so she did. That very day she invented the song of the Christmas Kitten, a creature both magical and wise.

(*An original story by Jillian Gilliland and Amy Friedman.)