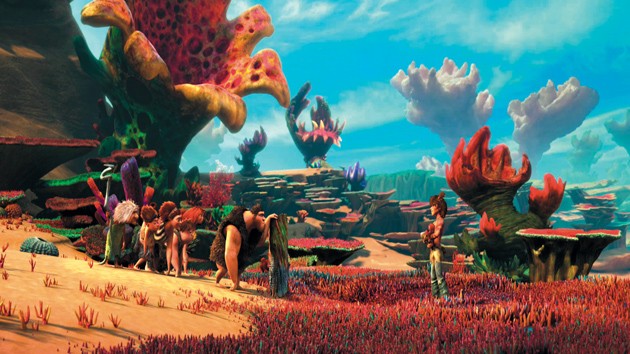 A family of cavemen, led by the Nicholas Cage-voiced patriarch Grug, find new ways to survive in an unfamiliar world with the help of a human named Guy, voiced by Ryan Reynolds, in the new animated picture “The Croods.” photo courtesy Dreamworks Pictures

It’s a typical cast of characters: a strong but sometimes overprotective father, a leveling mother, a cantankerous grandmother, a well-meaning brother, a spunky little sister and a curious but misunderstood main character.

What makes this family a little less typical is that they live in a cave. They wear skins. Their knuckles drag. They have to beat off prehistoric beasts on a daily basis. They are cavemen — the last of their kind.

Eep (voiced by Emma Stone) is the curious, misunderstood star, a teenage cavegirl who is frustrated by her family’s strict rules — namely, that anything new is bad, and to be afraid of everything all the time. These rules are propagated strongly by her father, Grug (voiced by Nicholas Cage), whose sole purpose in life is to keep his family alive. This edict goes over much better with Eep’s mother, Ugga (voiced by Catherine Keener), brother, Thunk (voiced by Clark Duke), grandmother, Gran (voiced by Cloris Leachman), and little sister Sandy (voiced by Randy Thom).

It isn’t long before those age-old rules become obsolete. One night, Eep spies something new and, despite the rule commanding otherwise, investigates it, and finds a human, Guy (voiced by Ryan Reynolds), his sloth-like pet, Belt (voiced by Chris Sanders), and a strange, sun-like light — fire. Guy tells Eep the world is coming to an end and he is heading to safety, and that she should do the same. Grug, predictably, refuses to abandon the family’s cave and forsake the rules, but apocalyptic events force the cavefamily to change, adapt and explore a strange new world.

This family is definitely dysfunctional, but despite their squabbles and obvious discomfort with the unfamiliar, they work well together. Guy’s better-developed brain tempers their well-coordinated brawn, and together they find they might have a shot at surviving — and thriving.

Better yet, few of the jokes are gained cheaply. There’s quite a bit of slapstick, but it’s cleverly done, and if there was any bathroom humor it slipped by me unnoticed. Many of the jokes are situational, but the greater part comes from interpersonal relations, and those are relatable. The family members are all familiar without being stereotypical. Each is funny in his or her own way — including Sandy and Belt, who do little speaking, but were my favorite characters.

The animation is gorgeous and the landscapes and inhabitants thereof are inventive — corncob trees, elephant-mice, land-whales, bird-pihrana. It kind of feels strange and magical and surreal for the audience, as well as for the Croods. One downside is that even at a mere 98 minutes long, the many levels of peril start to drag on for some. My brother who watched it with me, for example, thought it was perfectly paced, but the small child behind us asked his mother if it was over with 10 minutes left to go. I was inclined to agree (although that child and I probably have about the same attention span, so take it as you will).

That slight transgression aside, “The Croods” is one of the best animated movies I’ve seen in a while, and easily one of the funniest I’ve ever seen — which is another thing that small child and I agreed on. I wonder if that kid has any future plans of becoming a critic.