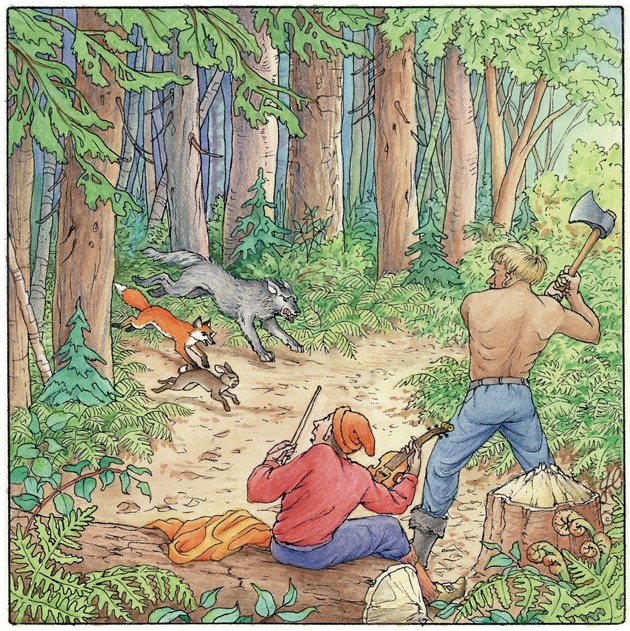 Once upon a time there lived a fine musician who played a fiddle like nobody had ever played a fiddle. One sweet summer day he was wandering through the forest all alone, and he began to wish he had a companion.

And so the fiddler took out his fiddle, and he began to play until the whole forest echoed with the sounds of his beautiful music. After a little while, a wolf bounded out from behind a bush and approached the young man.

The fiddler nodded hello, but he did not trust the wolf. He thought a wolf was not at all what he had in mind as a friend. Still, the wolf nodded in return and said, “You play such wonderful music, I wish you would teach me to play.”

The fiddler smiled, but he thought he could not teach a wolf to play the fiddle. “Easy enough,” he said, “but you must follow my instructions precisely.”

The wolf nodded eagerly. “Of course I shall pay close attention. I am a wolf. I am a marvelous student, you’ll see.”

And so the fiddler said, “Follow me,” and they walked on together for a while. Soon they came to a great oak tree, 300 years old, with a crack in its trunk.

“See here,” the fiddler said, “this is your chance to learn to play the fiddle. Place your paws in this crack.”

The wolf thought this was odd, but he did what he was told.

“Now wait here and I shall return,” the fiddler said. “Patience is the first thing to learn when playing a fiddle,” and he walked on. However, he still wished for a companion, and so once again he drew out his fiddle and began to play, and before long he heard a rustling among the trees, and a red fox slinked out of his hiding place. The fox trotted up to the fiddler and said, “How beautifully you play. Will you teach me?”

“Certainly, it’s easy,” the fiddler said, but he knew the fox was sly and untrustworthy. He thought he did not wish to have a fox as a companion. “Promise to follow my instructions exactly.”

“Follow me,” the fiddler said, and off they went until they reached a wide path with trees on both sides. The fiddler stopped, reached out and bent a hazel bough down to the ground. He placed his foot upon this branch to keep it down, and then he pulled a branch from the other side. “Give me your front paw, Mr. Fox,” he said, “if you wish to learn how to play the fiddle.”

Naturally, the fox offered his paw, and the fiddler tied it to one of the branches. Then he said, “Give me another paw.” And he bound this one to the other branch. “Hold these trees down and wait here until I return,” the fiddler said, and he walked on. But still he was lonely, so once more he began to play, and this time a hare hopped out of the trees to his side. “Teach me to play!” the hare squeaked.

The fiddler was thinking he had no wish to have a hare as a companion, for a hare is tricky and unpredictable. But he nodded and smiled and said, “Just do exactly what I say.”

“I’m a most attentive student,” the hare said, and they walked on together until they came to a tall aspen standing all alone. The fiddler took a cord from his pocket and tied this around the hare’s waist. He fastened the other end to the tree and said, “Little hare, this is your first lesson in preparation. Hold onto this rope and wait until I return,” and on he walked.

But the wolf had lost his patience, and he pulled his paws out of the crack in the oak tree. He was furious with the fiddler for tricking him and began to run through the forest to find the fiddler. As he ran, he happened to pass by the fox holding the trees down.

“A fiddler has deceived me,” the fox snarled.

The wolf stopped and the fox let go of the branches. Then he and the fox went on together, determined to punish the fiddler. When they came upon the hare, they set him free too, for they could see he also was the fiddler’s fool.

Now the fiddler was playing his music, and the sound reached the ears of a woodsman who was chopping down trees. “What a sound!” he cried, and he stopped chopping and turned toward the fiddler.

“What beautiful music!” the woodsman cried, and the fiddler’s heart filled with joy, for this was precisely the kind of companion he sought.

“Do you want me to teach you how to play?” the fiddler asked, but the woodsman shook his head.

“I only want to stand here and listen, please,” he said.

Just at that moment, the wolf and the fox and the hare came bounding toward them through the woods, and the woodsman could see they meant trouble.

He raised his axe high in the air. “Beware the axe!” he cried, and the three creatures were so afraid that they stopped dead in their tracks. Then they ran back into the forest, and the fiddler played on, pleased to have found a friend he could trust.