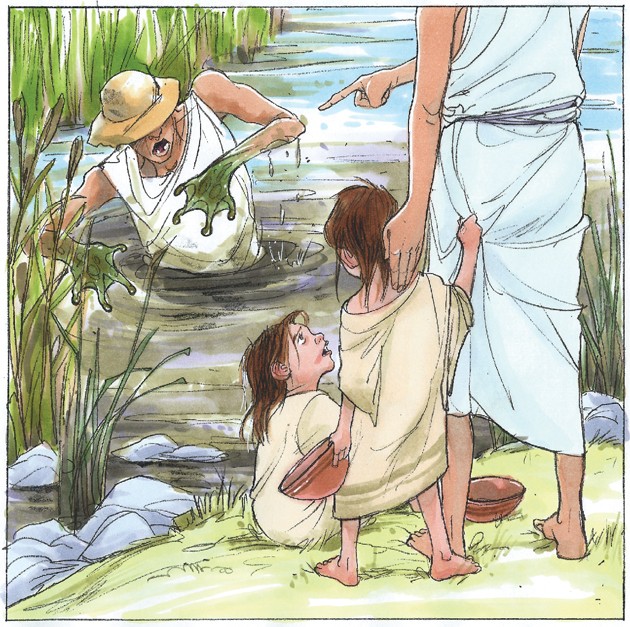 Once upon a time, Niobe was the Queen of Thebes. She was a beautiful woman, born of a noble family, and she had lived a life of ease. She had seven sons and seven daughters. More than anything, Niobe loved to boast about her children’s talents and their beauty and their strength. She believed she was the greatest mother who had ever lived.

One year, the people of Thebes gathered to celebrate the feast of Latona. As worshippers walked toward the temple to honor Latona and her children, Apollo and Diana, Niobe stood in the palace shaking her head.

“Why would anyone worship Latona, but not worship me?” Niobe asked her servants. “Latona is nothing compared to me. She has just two children. I have so many more. Don’t the people know a rightful goddess when they see one?”

Soon Niobe walked into the crowds and began to scream at the people.

“You are honoring the wrong woman!” she cried. “I am the rightful goddess!”

Seeing their queen’s fury, the people shrank in terror. They began to turn away from the temple to walk back home. They were unable to speak in the face of Queen Niobe’s rant.

Apollo and Diana watched the queen and listened to the insults she spoke. Those insults infuriated them. Their mother was a great goddess, and more than that, she had suffered great hardships in order to care for her children.

Everyone knew Latona’s story: She was the daughter of the Titans Coeus and Phoebe; the god Jupiter had fallen in love with her. When Jupiter’s wife, Juno, learned of their love, she exiled Latona from the world, sending a poisonous serpent to follow her.

That is how Latona began her endless wandering across the Earth. At Delos, she gave birth to Jupiter’s children, Apollo and Diana, and as soon as they were born, she was forced to flee again. One day, she wandered to Lycia in southern Turkey. By this time she was dying of thirst, and so were her children. When she saw a beautiful pond, she hurried toward it to take a drink.

But just as she was leaning down, the peasants who were gathering rushes and algae surrounded her and pulled her away.

“You cannot drink from our pond!” they shouted. “You are forbidden to be here.”

“Nature made water for all of us,” Latona said. “I only wish to quench my thirst. Please, I beg you. Have pity on my poor children, whose mother is dying of thirst and cannot care for them properly.”

The peasants were not moved. They shoved her away from the water and ordered her to leave Lycia. To make sure she could not drink, a number of the peasants raced into the water and began to trample the seabed. They churned up the mud below. Soon the water was too filthy to drink.

Latona raged. She raised her hands to the heavens and cried, “May you all live in the slime of your pond forever!”

The moment she had spoken this curse, the peasants, driven by an unseen force, dived into the pool. They swam to the bottom and back up to the surface again, only to dive again and again.

“Go away!” they shouted. “You are not welcome here!”

Latona could hear their curses even as they hid underwater. But soon their voices were different. Their throats swelled. Their mouths grew wide. Their heads shrank into their shoulders, and their backs turned green, their bellies white and round. They had turned to frogs. Forever after, they were that way — under the curse of Latona, living in the filthy pond.

Now, all these years later in Thebes, once again someone was insulting the mother of Apollo and Diana. The gods were furious. Apollo bent his golden bow and aimed it at Niobe’s eldest son and shot.

Without a sound, Niobe’s son fell from his horse.

Apollo placed another arrow in his bow and shot again, and again, and again. One by one, the seven brothers died. It all happened so quickly that no one knew what was going on. The people of Thebes were terrified at the sight, and many of them ran to the palace to tell Queen Niobe the terrible news.

Niobe sat with her seven daughters, and when she heard the story of her sons’ deaths, she stood up and cried, “Latona is a savage! I will make her pay. I am still greater than she!”

But just as she said those words, one of her daughters fell to the ground, struck by an arrow from Diana’s bow. And then, just as swiftly and silently, the sisters began to fall, one after another. It was so fast that no one knew what was happening.

Soon Queen Niobe was sitting all alone, drowning in grief. Tears flowed from her eyes. She could not speak.

But despite her sorrow and the flood of tears, her heart did not soften. Indeed, her heart grew so hard that she turned to stone, and those tears flowed down her cold, stony face.