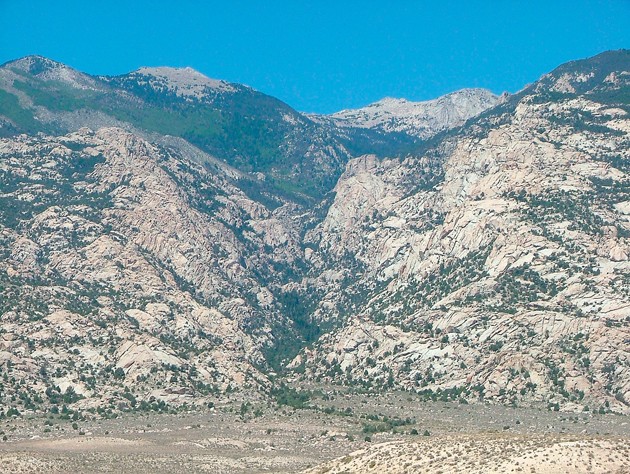 Rugged Wilderness of Red Cedar Creek Canyon in the Deep Creek Mountains of Western Utah in 2008. This area presents some of the most primitive wilderness in the United States.

The subject of the next several articles is the incredible Deep Creek Mountains in the extreme western portion of Tooele and Juab Counties.

These mountains are the most remote and least visited in Utah, and certainly rank in the top 10 in the lower 48 states as one of the most primitive wilderness type areas.

The range is accessed by traveling over 100 miles of secondary roads from any direction, mostly dirt, with the closest settlement of any size being Wendover nearly 70 miles to the north.

The range is truly remarkable as its highest summit—Ibapah Peak at 12,087 feet above sea level—has an astounding vertical relief of nearly 8,000 feet from the bottom of the Great Salt Lake Desert to its summit.

The view is awe inspiring as you approach the Deep Creek Mountains from the east along the Pony Express Trail. Gigantic snowcapped peaks rise from the desert in the vicinity of Callao. Journals from the Pony Express days state that these peaks were snow covered well into July. When viewed from the west in the vicinity of Ibapah, the jagged jumbled granite towers pierce the sky, pocked here and there with stands of dark pines among the boulders.

These mountains offer a treasure trove of wilderness recreation. If you want to be alone in a grand setting, and feel a little of what the first explorers did back when they were way out on the frontier, the Deep Creeks are the place to go.

The range is an area of extremes: The barren hard pan of the salt flats gives way to the alluvial deposits of the benches and canyon mouths, and then rises up to a mature Rocky Mountain-type forest where seven different types of conifers are found.

On the higher summit areas from 11,588 foot-high Red Mountain in the south, to 11,897 foot-high Ibapah Azimuth Peak in the north, there exists a sub alpine zone where there are dense stands of Engelmann spruce and small clear streams that pass through luxuriant meadows. The mountain grasses are knee high and there are giant rotting logs that remind one of similar areas in Utah’s high Uinta Mountains.

Higher still, a true tundra climate zone is found complete with alpine plants, rock gardens covered with lichens, and ancient bristlecone pines that may be thousands of years old.

The mountains have colorful names such as Red Mountain, which was actually named “Red Chief” Mountain on the surveyor’s charts of the 1880s. The chief part was dropped in later map versions of the range. Reilly Canyon and Reilly Peak are named after an employee of the Overland Stage who was massacred by Indians in 1863 at Canyon Station.

Ibapah Peak is named after an Indian word that means “Clay colored water” or “Deep Down water” depending on the translation. Both describe the “Deep Creek” that runs from south to north in the fertile valley to the west of the range.

For contrast, Ibapah Peak and the major summit to the north, Haystack Peak at 12,020 feet above sea level, are over 300-feet higher than Timpanogos, the king peak of the Wasatch Range, and over 750-feet  higher than Broads Fork Twin Peaks, which are the highest Wasatch peaks visible from Salt Lake City.

The east face of the range in the vicinity of Ibapah Peak closely resembles the Little Cottonwood Canyon area of the Wasatch Range. There is an abundance of exposed white granite forming towers, domes, and jumbled gates at the mouths of several of the canyons such as Indian Farm, Red Cedar and Granite Creek in particular.

Striking features of the range are the two giant buttresses at 8,676 feet and 8,937 feet above sea level, respectively, that guard the entrance to Basin Canyon west of Callao. These two foreboding, sharp peaks seem to burst up from the ground and attack the sky. They stand as gates from the barren wastes of the desert to an other worldly environment of grass, aspen, a cool stream, and pine higher in the enormous basin between Ibapah Azimuth Peak and 10,748 foot-high Rocky Peak.

Cool, perennial mountain streams flow in most of the canyons around the high peaks but are soon lost in the alluvial deposits of the Great Basin once they leave the range. Some of these streams actually contain a rare species of trout called Bonneville Cutthroat that are found nowhere else in the world. These fish are likely relics left over from the great Lake Bonneville, which 10,000 years ago covered the West Desert of Utah, was fully 1,000 feet deep and the size of Lake Michigan. This ancient lake lapped up against the benches of the Deep Creeks and the scars of its beaches formed by wave action are plainly visible.

Hiking, hunting, backpacking, camping, rock climbing and wildlife viewing are just some of the activities that you can do in the Deep Creeks. Over the course of the next few weeks, we will take a closer look at this amazing wild range of mountains and discover more about the island ecosystem that exists here, the human history of the range, as well as some geologic discussions on topics of interest.

For now, the Deep Creeks are covered in snow but as summer approaches, hopefully these articles will provide you with some ideas for good exploration and recreation in the magnificent Deep Creek Mountains of western Utah.