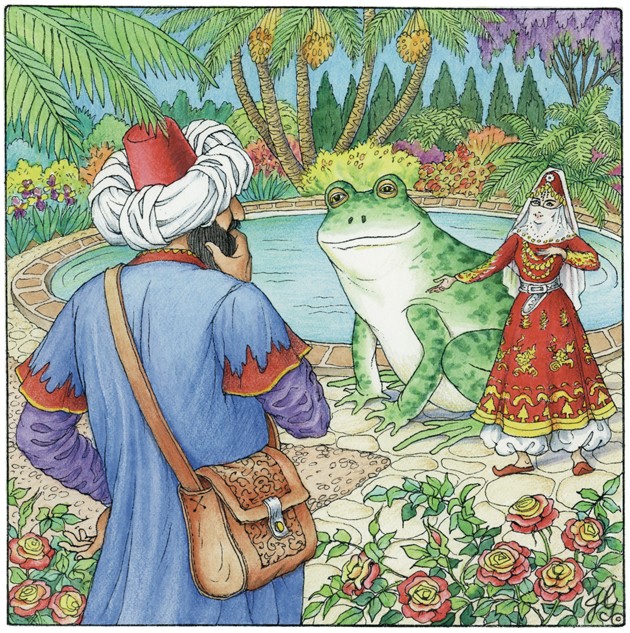 February 8, 2011
The Dervish and the Three Coins

Once upon a time a merchant came upon hard times, and one day he discovered he had only three gold coins remaining. He thought long and hard about how he would use his money. He could not sleep or eat, so ashamed was he of his misfortune, and so at last he left his family and fled from his village. He prayed that God would look after his family.

He walked all day long, and as night fell, he reached a dense forest. He continued on, and soon he came upon a poor man, a dervish who made his home in the forest.

“My son,” the dervish said, “what are you seeking in the forest at night? You look troubled.”

“I came to seek my fortune,” the merchant answered. “I was a wealthy man, but I have only three coins left to my name, and I do not know what to do.”

Naturally the dervish understood, for he had taken a vow of poverty, and in his many years of contemplation, he had learned many things. “I know the best way to spend your coins,” the dervish said. “Give them to me, and I will teach you wisdom.”

The merchant thought about this for a while, but he sensed that he could trust the dervish, and so he handed over his coins.

“Take care that you listen to my teaching,” the dervish said. “Four wise sayings I shall give you, and these will save your life.”

The merchant moved closer, and he nodded. “I am listening,” he said.

“The first bit of advice is that it is best to take the middle in everything,” replied the dervish. “Second, waste no breath and fear no death. Third, in the eyes of a lover, the beloved is beautiful. And fourth, that which you do not understand, judge not.”

The moment the dervish said these words, he disappeared, and the merchant lay down to sleep, repeating to himself the four wise sayings until he had fallen asleep.

At dawn he awoke and set off, and before he had walked many miles, he reached a fork in the road. One road led to the left, one road led down the middle, and the third led to the right. Remembering the wisdom of the dervish, the merchant repeated the saying. “It is best to take the middle in everything,” and he carried on, straight ahead, taking the middle road.

He walked for a few more miles and he reached a great mountain covered with snow, and he looked up and admired the beauty of the majestic mountain. “I wonder what is going to happen to me next,” he thought, and just as he thought those words, he saw the entrance to a cave.

Remembering the words of the dervish, “Waste no breath and fear no death,” he bravely walked into the cave. He walked in darkness but soon he saw, ahead of him, a bright light, and he walked toward that light. When he reached it, he walked out into a fresh garden filled with flowers. It smelled more beautiful than anything he had ever smelled, and he thought he might like to stay here forever.

He was about to lie down beneath a tree to rest, when he saw a gleaming pool. On the banks of the pool he spied a gigantic frog as big as a man. It sat very still, staring at him.

But the merchant knew he must not be afraid, and so he kept looking, and as he stared, a beautiful girl in a bridal dress appeared beside the frog.

She looked at the merchant and asked, “Which is more beautiful, this great frog or me?”

The merchant remembered the words of the dervish, and he said, “In the eyes of a lover, the beloved is beautiful.”

The moment he spoke those words, the frog burst wide open, and in its place stood a mountain of gold.

The merchant understood he had uttered magic words, and he felt grateful to the dervish. “Here is what I have in place of my coins,” he said to himself. He began to gather the gold, filling his bag and his pockets, and the beautiful girl only watched and smiled upon him.

Then he began the long trek home.

When he had nearly reached his village, a horseman approached, and for a moment the merchant was afraid he might be robbed. But as the horseman came closer, he saw it was his neighbor’s son.

The two men greeted each other warmly. “How is my family?” the merchant asked.

The neighbor’s son scowled. “Your wife has forgotten all about you. She loves someone else.”

When he heard this, the merchant’s heart nearly broke, but then he remembered the words of the dervish. “That which you do not understand, judge not,” and so instead of judging this strange news, he simply walked on.

When he reached his village, he went to the home of his sister to ask about his wife.

“Poor woman,” his sister said, “when you left she was in despair, and she worked harder than ever. The neighbor’s son tried to convince her you would never return, and he kept harassing her to marry him. I worried about her, and so I brought her to my home.”

The merchant was overjoyed at this news. When he was reunited with his wife, he told her the whole story of all that had happened. He shared his gold with his wife and children, as well as his sister. Everyone rejoiced in their good fortune.

“It is wise to listen to the wise,” the merchant said.

Naturally they agreed, and they lived happily ever after.