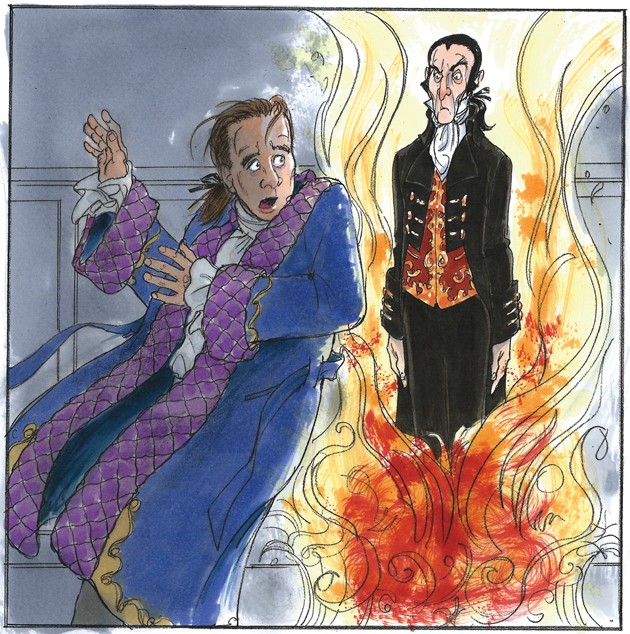 Long ago, a fellow called Jonathan Moulton was born in a town called North Hampton, in New Hampshire. He became a colonel of the New Hampshire Militia and served in the French and Indian Wars and the American Revolution.

During the Revolutionary War, the colonel’s regiment guarded the seacoast against British invasion. When the colonel marched his men to the Battle of Saratoga and helped to defeat the British Army, Gen. Washington promoted him to brigadier general. He was rewarded with land in the lakes region and founded the town of Moultonborough.

Moulton was by far the wealthiest man in town. After a while, it seemed to his neighbors that he cared for money beyond everything else. He built an enormous mansion, and he was forever scheming to make even more money.

One cool autumn night, not long after the end of the Revolution, Brig. Gen. Moulton was looking outside at the towering trees with their red and orange leaves blowing in the wind. He began to dream of ways to become even richer.

“I’d sell my soul to have more gold,” he sighed, and just as he did, he heard an explosion. He turned toward the sound. There, in the center of his sitting room, stood a man dressed in black and gold, surrounded by flames. Those hot flames didn’t seem to touch the fellow.

“You summoned me?” the man asked.

The general stared. “Who are you?” he asked at last.

“You said you’d sell your soul, didn’t you?” the man replied.

Then the general understood — this was the devil.

The unexpected guest was tapping his foot with impatience. “I don’t have all day,” he complained. “Do we have a deal?”

The general was still puzzled. He shrugged, and the devil took that as agreement.

“In exchange for your soul, then,” he said, “I’ll make you the richest man in this whole state. On the first day of every month, I’ll fill your boots with gold. Leave them at the foot of the chimney. Just sign this agreement.”

He produced a contract penned on parchment.

The general was skeptical. “How do I know you’ll keep your end of the bargain?” he asked. “What proof do I have that you will do as you say?”

The devil laughed. He shook his arms and legs and, as he did, gold showered the room.

The general dived to pick up the coins. He burned the tips of his fingers, for those coins were as hot as coal, but he didn’t care. They were gold, and that’s all that mattered to him.

His eyes met the devil’s and he said, “I’ll sign.”

As the general read the contract, he saw a number of names he recognized — some of the most famous men in the country had made the same deal. So with rising confidence, he signed, and the moment he did, he heard another explosion. The devil had disappeared in a shower of flames, leaving a pile of gold in his stead.

At the end of the month, the general placed his boots beneath the fireplace. Sure enough, the next morning they were brimming with gold. He did it again the next month and the next. For a while, he was pleased. The neighbors noticed he was building more buildings, buying more horses and carriages, wearing finer clothes. And still he was forever scheming and dreaming of ways to make more money.

One day, the general bought an enormous pair of boots — boots that could fit a giant. He placed these beneath the chimney. Sure enough, the next morning they were filled.

This sent him scheming even further.

At last, the general was overjoyed. He had come up with a brilliant, bold plan that he was sure would make him the richest man in the world.

The next month, in a howling wind, the devil appeared on the roof. He poured coins down the chimney, into those boots, but no matter how many coins he poured, the boots did not fill. The devil slithered down the fireplace to see what was wrong.

When he lifted up the boots, he discovered the soles had been removed, and beneath them was a hole leading down to the cellar, where all those coins were landing.

The devil howled and vanished.

Moments later, the general heard the sound of an explosion. He smelled smoke and raced out of the house wearing only his dressing gown. He stood outside, staring at the fire that was consuming his beautiful house. He wept. He raged. He tried to race into the flames — but his neighbors held him back.

When the fire was at last put out, the general maniacally raced back into the house to search for his gold, and so the gossiping began. People said he must have made a deal with the devil.

Not long after the fire, the general died.

The neighbors gave him a decent funeral. After all, he had fought in the wars. But not long after they had buried him, some grave robbers dug up the grave and opened the coffin.

The coffin was empty.