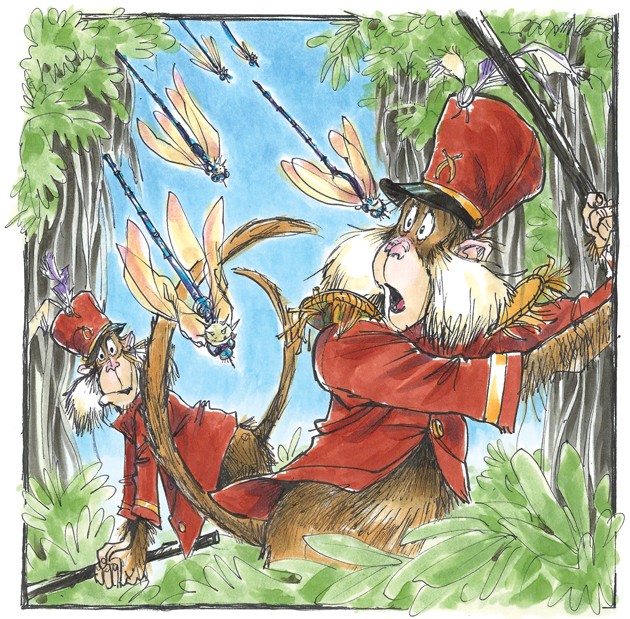 One day, a dragonfly was traveling from the northernmost island of the Philippines — Luzon — down south to Mindanao. The air was steamy, and the sun was high in the sky. After many hours, the poor dragonfly was exhausted, but she still had a long way to go.

“I’ll rest awhile,” she decided, and spotting a grove of banyan trees, she flew down to rest on one. She did not notice the family of monkeys in the tree.

As she was fanning herself with her wings, resting and catching her breath, she suddenly heard a rustling sound beside her.

“Who’s there?” she asked, and a moment later a monkey stood beside her.

“What are you doing?” he asked. “You’re trespassing! You’ll have to leave right now.”

The monkey looked enormous to the dragonfly, and his voice was harsh. She began to tremble with fear.

Still, she was so tired. Her desire for rest inspired her courage, so she looked up at the monkey and said, “Please, sir, I would like to rest here until sunset. I’ve been flying so long, my wings won’t carry me much farther.”

But the monkey just shook his head. He didn’t care about the dragonfly.

“Poor, tired wings!” he said, but his voice was mocking, and he was sneering at her. “We don’t allow weak creatures to stay in our tree,” he said. “Go away, now!” and with that, he snapped a twig from the tree and brandished it as if it were a sword.

“Don’t hurt me,” the dragonfly said, but just at that moment the monkey threw the stick at her.

Now, the dragonfly was tired, but dragonflies are quick, and before the stick was out of the monkey’s hand, she was flying away, flying toward the land of her family.

When at long last she reached home, she went at once to tell the king of the dragonflies the story of the monkeys in the banyan tree.

When the dragonfly king heard the story, he was furious. He decided the dragonflies must confront the monkeys, and he sent three of his soldiers to speak to the monkey king.

The dragonfly soldiers flew to the banyan tree and called upon the monkey king. “Your monkeys treated one of our dragonflies cruelly,” they told the king. “Our king has decided you must make amends or we will wage war on you.”

Hearing this, the monkey king just laughed. “War, you say?” he howled with laughter. “Tell your king to come back here, and we shall see who wins this war!”

The dragonfly soldiers understood that winning a war against the monkeys would be difficult, and so they said, “Sir, you never know how these things might end. Perhaps you wish to reconsider? An apology would do.”

But the monkey king just stamped his feet and said, “Go — go now and tell your king my answer! War it shall be!”

The dragonfly soldiers flew back to their king and told him what the monkey king had said, so the dragonfly king ordered his whole army to fly to the monkeys’ banyan tree for battle.

The dragonflies carried no weapons but their wings, and they flew as fast as they could, in strict formation, all the way to the banyan tree.

As they approached the tree, they saw an army of monkeys wielding branches and sticks.

When the monkey king saw the dragonflies approaching, he cried out, “Go now! Attack these intruders!”

The dragonfly king turned to his soldiers and commanded them as well: “Fly to the monkeys and land on their foreheads!”

And so, as the monkeys began to scatter down their tree, waving their sticks in the air, the dragonflies flew directly at them. Just as their king had commanded, they landed on the monkeys’ foreheads.

The monkeys quickly raised their weapons and struck, but the dragonflies were so quick, they flew away, and so the monkeys struck their own foreheads. One by one, the monkeys fell from the tree.

And that is how all the forest creatures learned to admire and respect speed, agility and wit.