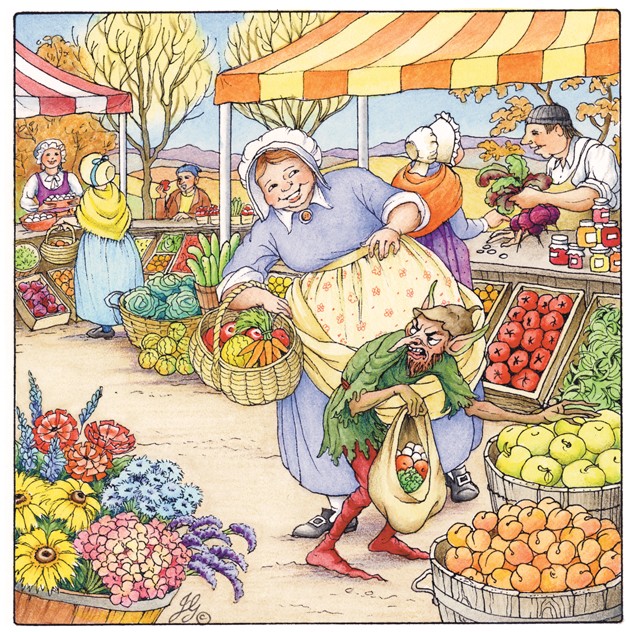 Once upon a time a nurse lived in a tiny village, and though she had no family, she was a busy woman. She looked after all those who became ill, and she also took care of many children.

One autumn night, as the wind howled outside her door, the nurse climbed into her bed to sleep when suddenly she heard a knock on her door. It was midnight, and she knew this must be urgent. She slipped into her robe and walked downstairs.

When she opened the door she saw a stranger — a small, ugly fellow with a funny nose and shifty eyes. “Please,” he said gruffly, “you must come look after our baby. My wife is too ill to care for him.”

The nurse didn’t like the looks of this fellow, but she didn’t like to turn down anyone in need. Besides, she had to earn her living, didn’t she? She dressed and pulled on a heavy coat to shield her from the weather, and she walked outside.

There sat the little man upon a tall, black horse. The horse’s eyes were gleaming bright, staring right at her, and for a moment she hesitated.

“Up you go,” the little man said, offering his arm, and the nurse shook away her worries and climbed up behind him.

Before she could settle herself, the horse was off, whisking so fast through the forest that the nurse had to hang on to that fellow for dear life.

They rode for what seemed like a long time, and everything around her was a blur, so the nurse lost her bearings. But eventually they arrived at a tiny cottage. The nurse dismounted and went inside, and there she found the little man’s wife lying in bed. Her skin was pale and her eyes dark with sadness, but she was surrounded by children — they were playing with every imaginable toy.

In the woman’s arms lay a beautiful child, a little boy with hair like a halo and a face as lovely as any she had ever seen.

“I’ll take him now,” the nurse said softly to the mother, and she lifted the baby into her arms.

The mother handed a small box to the nurse, and in a weak voice, she said, “Put this ointment on his eyelids as soon as he opens his eyes.”

The nurse carried the little boy into another room, and before long he opened his eyes. The nurse saw that the boy, despite his beauty, had his father’s black, squinty eyes. Just as the mother had instructed her, she stroked his eyelids with the ointment, hoping this might make them beautiful. Or perhaps this was for something else? She had no idea what it could be, for she had never seen or smelled such a thing.

She could not help wondering, and so, when she was certain no one was watching, she stroked her own eyelids with the ointment.

In a flash everything around her changed. The cottage grew from a tiny, dark, miserable place into a big beautiful mansion furnished with the finest things. When the nurse walked into the bedroom, the mother was no longer sad and exhausted; she was as beautiful as any queen and dressed in silks and satins and brocades. The baby was not squinty-eyed — he was the handsomest child in the world.

But now those children who had surrounded their mother were not little boys and girls; they were imps with blazing eyes and pointy ears and wrinkled faces.

And those imps were pulling on their mother’s ears, a sight that horrified the nurse. They didn’t have human hands — instead, they had hairy paws.

The nurse now understood; she had walked into a house of pixies.

She knew a thing or two about pixies, including this: She could not say a word against them. So she remained silent, though she stayed for several days, looking after their sweet baby boy.

At week’s end the woman was well again, and she thanked the nurse for caring for her child. “Take her home now,” the woman said to her husband.

The little man called to his coal-black horse, and once again they galloped so fast, the scenery passed by in a blur. After a while they reached the nurse’s cottage. The odd fellow paid the nurse more money than she had ever been paid in her life.

She was, of course, overjoyed, and since the next day was market day, she decided she would go to stock her larder.

So the next day she did, walking from stall to stall, selecting the finest tomatoes, the ripest melons, the sweetest apples. But suddenly she noticed the squinty-eyed pixie also moving from stall to stall. At each stall he stole something — eggs from this one, flowers from that. He stole broccoli bushels, beet bunches, anything he could grab.

The nurse did not think this was any of her business, but she decided she must say hello to the fellow. After all, she knew his family.

He turned on his heels and glared. “What? You see me?”

“Of course,” said the nurse, and she smiled knowingly. “And I see you’ve been busy today!”

The pixie’s face clouded with anger. “You see too much,” he snapped. “You stole our ointment, and for that you will pay!” And he struck her with a stick.

The nurse gasped and put her hands to her face, “I can’t see!” she cried. And sure enough, the squinty-eyed pixie had blinded her.

From that day on, the nurse told everyone to beware of the pixies. Although some thought her mad, many others took her sage advice and were always careful to believe in them, and to beware of them.