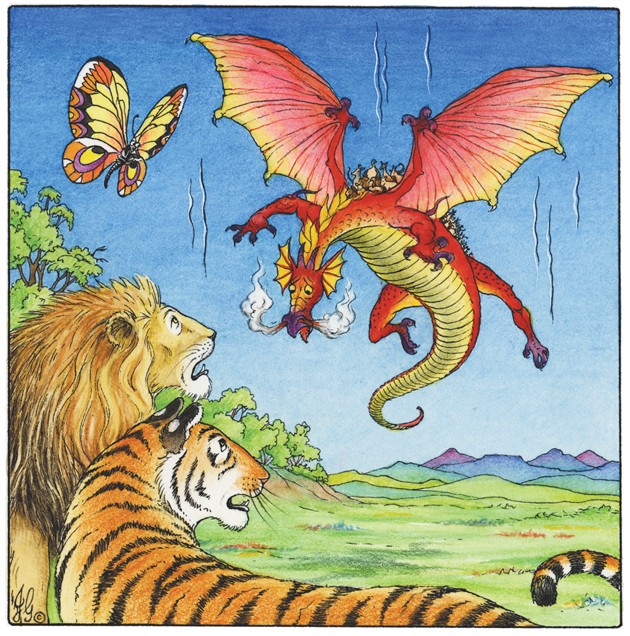 Long long ago, the animals that roamed the land and swam the oceans and flew across the sky looked different from the way they look today. While a few looked the same — the lion, the tiger and the butterfly — most of the creatures of this world were the same size and shape and color. Those that flew had wings, and those that walked had legs and a tail, and those that swam had gills, but otherwise it was hard to tell one creature from another.

Now the lion and the tiger and the butterfly looked different, and sometimes they commented upon this amongst themselves. “We’re special, don’t you think?” they asked each other, and naturally they agreed they were. But they didn’t say that to the other animals, so peace more or less reigned.

Then one lovely summer day the fish were swimming happily, and birds were flying lazily, and the land animals were resting peacefully in a beautiful field of wildflowers when suddenly they heard a roar like nothing they’d ever heard before.

“What is that?” the elephants trumpeted.

“I don’t know …” the other animals echoed, their voices trembling with fear.

But the lion and the tiger just yawned. “Who cares?” the lion asked. “It’s only a roar. I can roar too,” and he did.

“I’ll check to see what’s coming,” said the butterfly, and she flew high into the sky, looking in the direction of the sound. “I see someone coming,” she said, “someone who looks different from all of us.”

Then everyone saw a flash of fire; out of the forest came an enormous red and golden dragon with scales that shimmered so brightly, for a moment everyone was blinded by the sight.

The dragon let loose a flash of fire, and he roared, “Everyone, quick! Danger is coming! Climb upon my back and I’ll save you!”

“I saw it in the stars,” the dragon said. “You must leave here. Quick, climb on my back, and I’ll fly you away.”

Most of the creatures began to run and swim and fly toward the dragon.

The tiger raised a paw and said, “Patience, all of you. Dragon, explain.”

“There’s nothing to explain,” the dragon argued. “There’s danger coming, and that’s all I have to say about it. If you stay here you’ll suffer!”

The butterfly fluttered her wings. “I’d like some proof, please,” she said, but the others barely heard her, so busy were they rushing to climb upon the dragon’s back. They tumbled over each other in their haste. Fish leapt out of the rivers and oceans and streams, hoping they could hold their breath long enough to be saved. Squirrels and hippos and giraffes and elephants and eagles and kangaroos were scampering onto the dragon’s broad back.

“Wait!” the lion cried. “Don’t be in such a hurry to believe everything you hear!”

“Don’t be afraid,” the tiger and the butterfly entreated.

But it was too late. By now the dragon was loaded down, and he was flapping his wings, ready for take-off.

The animals were hopping up and down, flapping wings and swishing tails, panting and gasping for breath, stirring up a wind so strong, the trees bowed low. The dragon flapped harder and harder, trying to rise, but he was having trouble with all that wind.

“Hurry!” cried the tortoise. “We must get away.”

“What’s taking you so long?” the muskrat squeaked.

“Get us out of here!” wailed the wombat and the bandicoot. Zebras brayed and hyenas laughed nervously, monkeys chattered, dogs howled, snakes hissed.

“I’m trying my best,” the dragon answered, “Settle down!”

There was such a commotion that it took all of the dragon’s strength to finally lift off the ground.

There he was, flying low, while butterfly and tiger and lion watched and shook their heads. “Nothing to fear but fear itself,” lion said. “I heard that somewhere.”

“Sounds right to me,” tiger agreed.

The dragon was trying to go higher. He flapped his wings harder and harder, but all those animals weighed a lot, and their nervous leaping and flailing and wailing wasn’t helping, and suddenly, the dragon’s wings gave out.

He crashed right into that bright green field.

The animals cried out in terror, but luckily they were all fine.

However, after that everyone changed. The snake lost his legs in the accident. The rhino bumped his head and grew a horn. Most of the elephant’s teeth fell out, except for two that grew into large tusks. The giraffe’s neck wrapped around a tree and stretched to the length it is today. The monkey’s teeth never stopped chattering. The zebra was streaked with stripes. The hippo rolled until he was round. All the animals acquired the characteristics they have today. By the time the dust settled, every animal looked different from every other animal.

The butterfly flitted everywhere, studying all the changes. “Everyone’s different now,” she told the lion and the tiger. “Perhaps they’ll learn not to listen to rumors.”

But the lion was skeptical. “Watch this,” he said to his companions, and then he let out a mighty roar.

When he saw all the creatures shivering and shrieking, he understood that it would always be easy to inspire fear in others; that animals, like people, often don’t learn from their mistakes!