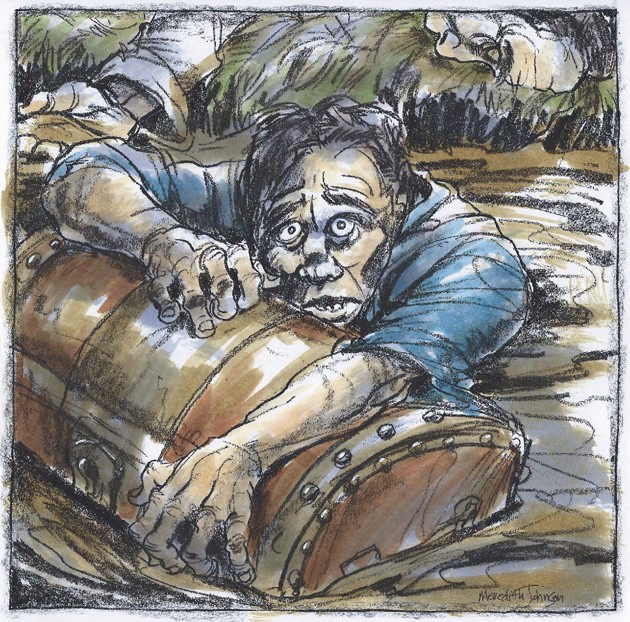 September 20, 2016
The Feu Follet and the Buried Treasure

Everyone has heard tales of the feu follet, a ghostly light that appears in the swamps. If you try to follow it, it will retreat and lead you deeper and deeper into the swampy, prickly lands until you are forever lost. Some people say the feu follet is an evil angel; others say it is a lost child who died while still a baby. They say the feu follet likes to return to the baby’s nursery, and if the child wakes with rosy cheeks, you know the feu follet visited in the night to steal some of the baby’s sweet breath.

There are only a few ways to ward off the feu follet — scatter mustard sees on the floor, and the feu follet will try to count them; when it loses track, it will be distracted and may forget about stealing the baby’s breath.

Some say old-time pirates like William Kidd and Jean Lafitte killed one of their crew whenever they were burying treasure, and they tossed the body into the hole along with the treasure chest. In this way, the dead man’s spirit was tied to the treasure and would forever guard it from any thieves. Later, when the pirate removed his buried treasure, the spirit turned into a ball of light, the feu follet.

One night, two men were working on the railroad near Lake Pontchartrain when they saw a soft blue light moving through the trees.

“What’s that?” Jean called to Luc, and Luc shook his head. They both had heard tales of the feu follet from the local people.

“You’ve heard of the treasures they guard, haven’t you?” Jean asked his partner.

A moment later, it was as if the same thought had coursed through both men’s minds. Suddenly, and without a word, they both grabbed their shovels and began to run toward the light, thinking of the marvelous treasure that the spirit must be guarding. Soon it would be theirs.

The light kept moving, and so did Luc and Jean. When it finally stopped, the men were deep into the swamps, and they watched as the light began to sink into the damp earth.

“That must be where the treasure is buried,” they whispered, and they began to dig.

They were soaking in sweat, but they didn’t mind; this would be the beginning of a whole new life — a life of leisure, they imagined. Both men were dreaming the same dream, and so they dug with all the strength they had.

Suddenly, Luc struck something hard, and both men heard the clank of the shovel.

“That’s it!” Jean cried, and they dropped to their knees and began to brush away the dirt. Soon they reached a large wooden chest.

But Jean’s mind was spinning, and he thought how good it would be not to have to share this treasure. So he raised his shovel in the air and struck Luc over the head.

“It’s all mine!” Jean said as he began to pull on the chest, yanking as hard as he could to lift it out of the swampy earth. But as he worked, the ground under his feet began to sink, and soon he and the chest were drowning in mud.

That is when Luc came to, and he saw Jean staring in horror as he and the treasure sank into the ground. Terrified and heartbroken that his friend would betray him, Luc slowly got to his feet, and though he was woozy, he ran back to their campsite as fast as he could. There he crawled into his tent and shivered through the night.

When the sun rose the next morning, Luc walked back in the direction they had gone the night before, but the only thing he found in the swamp was his shovel and Jean’s.

“How strange that they did not drown as well,” he said, carefully reaching to lift them, when suddenly he heard a whoosh and a hoot. Then he heard a strange, spooky laughter dancing on the wind, mocking him, and he hurried back to the campsite as fast as he could.

As the years passed, Luc repeatedly told the story of what had happened to Jean, yet few of his fellow railroad workers ever believed him.

“It was the feu follet who killed him!” Luc insisted, and the others shook their heads. But on those nights when a blue light appeared in the distance, the railroad workers quickly slipped inside their tents.

After that incident, Luc walked around with a saying, and it went like this: “The treasures we work for are the treasures we’ll have.”