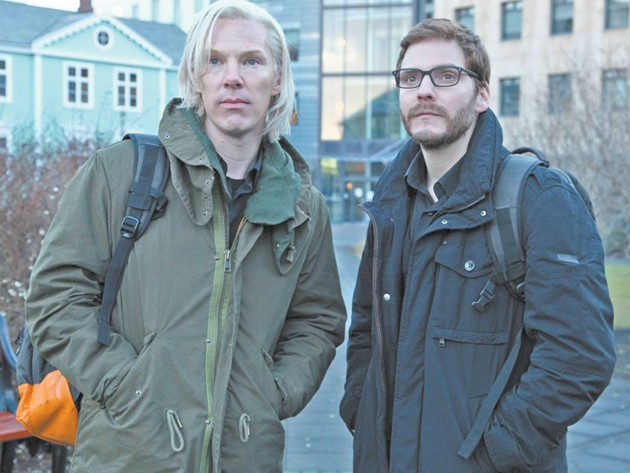 Benedict Cumberbatch, left, stars as Julian Assange, with Daniel Brühl as one of Assange’s earliest supporters in “The Fifth Estate,” which traces WikiLeaks and its founder from its humble beginnings through its release of the largest leak of government documents in history. image courtesy DreamWorks

October 17, 2013
‘The Fifth Estate’ has good bits throughout, but it struggles

In 2010, Daniel Berg (Daniel Brühl) was an IT guy who was helping with the first shoots of a pet project of the mysterious Julian Assange (Benedict Cumberbatch, in perhaps his least attractive role ever).

The growing web platform, which eventually becomes the Wikileaks we know and love/hate today, and Assange demand more and more of Berg’s time, costing him his job and girlfriend (Alicia Vikander) and distancing him from his family. But the project keeps gaining momentum, culminating in the release of the thousands of documents leaked by Pfc. Bradley Manning.

In addition to Brühl, Cumberbatch and Vikander, Laura Linney and Stanley Tucci play a pair of U.S. State Department diplomats dealing with Wikileaks’ effect on the government, and Peter Capaldi and David Thewlis play an editor and writer, respectively, at The Guardian as they prepare to publish the leaked documents.

The casting is, for the most part, good (except I kept wishing Berg was instead being played by James Macavoy, the original pick for the role, Ewan McGregor or even Joshua Jackson. I mean, Bröhl was fine, but…), which is what made the overall movie a bit of a disappointment. It could have been so much better.

There were some really good, exciting, compelling bits throughout. Personally, though I might be professionally biased, I thought the movie was at its strongest when it focused on the tense negotiations between The Guardian and Assange, and then the flurry in the newsrooms of The Guardian, The New York Times and Der Spiegel as the three papers tried to get ready to publish redacted and verified versions of the documents together. The story from within the government with Linney and Tucci was good, too, particularly after the documents were released.

Sadly, both of those perspectives were relatively brief.

There were some strong aspects of the interaction between Assange and Berg, but their story is also largely where the film flounders. Much of it is too slow, and there are a lot of cuts to a figurative depiction of the organization, which I found distracting and disorienting.

Cumberbatch probably does good things with portraying Assange’s character, but he can only do so much with the writing. Apparently, the filmmakers took great pains to portray Assange “fairly” so that viewers could make their own conclusions as to whether he was a hero or a traitor. The result, however, is less a moderated depiction of a nuanced person than it is a zig-zagging, bi-polar caricature of a master manipulator.

All that being said, it’s not a terrible movie, and the fact that Assange warned Cumberbatch and others against making it makes it a more attractive entertainment option in some ways. But here’s a better idea: Keep the casting (even Brühl), but shift the focus to the newspapers and State Department, and let the development of Assange and Berg’s relationship simmer in the background, where it could be more effectively played against a more fast-paced setting.

(And if you’re really jonesing for debates on privacy, political intrigue and Benedict Cumberbatch and don’t care if you never sleep again, check out Masterpiece Theater’s 2008 miniseries “The Last Enemy,” which happens to currently be available on Hulu. Just my two cents.)