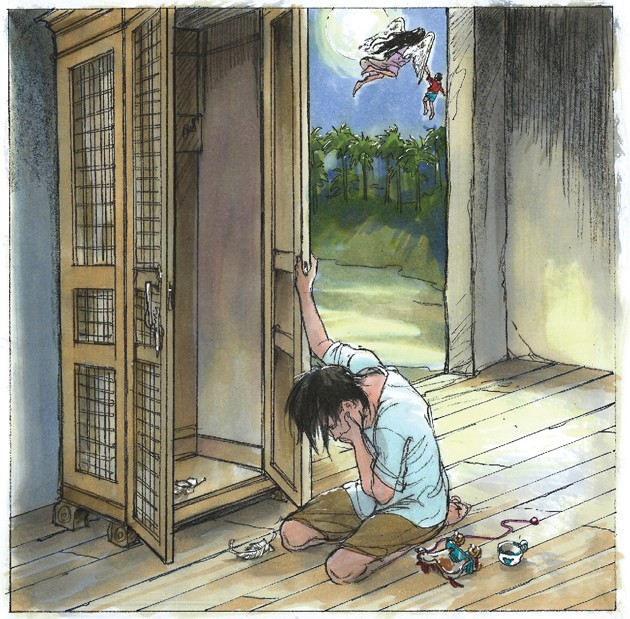 (a story from the Philippines)

Once upon a time, a farmer lived near Luzon, and there he had a tiny coconut farm. To protect his farm from intruders and wild winds, he built a wall around his fields. One day he walked out to the fields and saw the wall had been knocked down. That day he worked until sunset, rebuilding the wall. Satisfied, he slept well that night. But at dawn when he returned to his fields, he discovered someone had knocked down one part of the wall.

He spent the day repairing the wall. But the next day, to his astonishment, it was once again destroyed. This happened a third time, and at last he decided he must stand guard all night.

He hid behind a tree in one corner of the field. The sun began to set and the moon rose. And just as the sky turned to inky black, he heard a sound. He tiptoed from behind the tree and watched as three stars fell from the sky.

The stars were heading straight for the wall, and just before they landed, they turned into three beautiful maidens with hair as black as night, skin like silver and large shimmery wings.

“Wait! Stop!” the farmer cried. He ran toward them, and two of the maidens quickly spread their wings and vanished into the sky. But the third girl did not move — she seemed stuck to the Earth, and the farmer was able to catch her. He held her by the arms.

He began to scold her for ruining his wall, but he looked into her eyes that were as dark as a deep pool. And he fell instantly in love.

Until this moment, the farmer had never loved anyone, but he knew now he was in love. And he could never let the star maiden go.

The star maiden looked into the farmer’s eyes, and she felt a tug at her heart, too. She did not run away.“I’ll stay,” she said.

The farmer was overjoyed. “Come inside with me,” he pleaded.

She agreed, and as they turned to walk into the farmhouse, she removed her wings, folded them and held them at her side.

Inside, they talked for hours, but the farmer began to fear she might go away. “Give me your wings,” he said. “I’ll keep them safe.”

Because she trusted him, she gave him her wings.

The very next day the farmer hid those wings. He feared if she found them, she would leave him. He could not bear this thought.

Time passed, and the star maiden fell in love with the farmer. They married and were happy together.

A few years passed, and the star maiden gave birth to a beautiful baby boy. The family was happy together. They celebrated the passing seasons, their love for each other, and all their good times. When they were sad, they comforted each other. And after a while, the star maiden began to forget her previous life.

But sometimes, late at night, when she happened to look into the sky and see the twinkling stars above, the star maiden felt a pain in her heart. She remembered the great silence of the sky, the whirl of planets and the many worlds she had watched and visited and dreamed of.

One morning, after her husband had left for the fields and while her son was still asleep, the star maiden happened to discover a cabinet behind the pantry. It was a cabinet she had never seen, and she carefully opened the door. There were her wings!

When she saw those wings, she felt that longing that had always been there. She thought of her sisters and the fun they had dancing through the sky. She remembered her star family, the great constellation of beauty and joy. She unfolded her wings and attached them to her shoulders. Once more, she felt her heart rise toward the sky.

She ran into her son’s room and lifted him into her arms. “Come with me, dear boy,” she whispered. She carried him outside, and together they flew into the sky.

That evening when the farmer came home from the fields, he called out to his wife and child. When they did not answer, he frantically searched the house, and when he found the cabinet door open and saw the wings were gone, he understood. He fell to his knees; his heart was broken.

For days the farmer wept. He could not move. At night he stood outside and stared into the sky, wailing to the stars, “Come back to me! I love you so. Please send her home!”

For weeks, he wept and wailed until the gods began to pity him. At long last they decided to build a bridge he could climb to the sky to reach his wife and child.

That very evening the first rainbow appeared in the sky, a bridge of many colors, reaching from the Earth to the sky. When the farmer saw it, he began to climb.

They say he reached his wife and child and he lived happily ever after. Ever since, whenever someone weeps and the sun shines, a rainbow bridge appears — and with the rainbow comes a world of possibility.