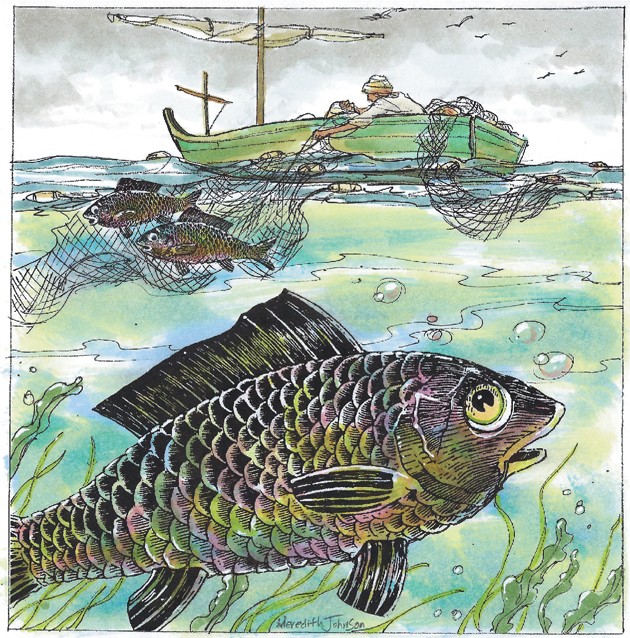 (A Tale From India)

Once upon a time, in a long, winding, beautiful river, three fish lived in harmony. They were brothers, and they enjoyed their days swimming in peace.

One day, as they were swimming, they noticed a bend in the river, so they swam in that direction. As they rounded the corner, they discovered a narrow outlet that led to a pretty little pond.

“Let’s go,” said the youngest brother. “This is a nice spot to swim.” And so they did.

That pond was so nice, in fact, the three brothers decided to stay.

It is true that these fish were brothers. And they looked alike — fat and golden. But otherwise, they couldn’t have been more different from one another.

The eldest fish was proud of his intelligence and his wits. He always thought before he leaped. The middle brother sometimes liked to think — when he was in the mood. But the third brother? He never used his wits at all. He called himself carefree, the most playful and happiest fish. He did not like to think. Not one bit.

“You ought to think,” the eldest told his youngest brother.

“You ought to leap,” the youngest answered.

And the middle brother looked first at one and then at the other. He shrugged and looked at the bright blue sky and said, “Come on, brothers, let’s swim!”

But after a few weeks of enjoying the pond, the eldest fish said to his brothers, “This is a peaceful spot, but I sense danger lurking. The king’s palace is not far away. His fishermen are sure to come here with their nets, and if we stay, they’re bound to catch us. We don’t want to become dinner. Let’s swim back to the wild river.”

“Don’t be silly,” said the youngest brother. “It’s lovely here, and besides, that’s a long way to swim, and I’m happy here!”

The eldest fish let his brothers sway him, and they stayed, but every day he thought about danger. As time passed, he tried again to convince his brothers to leave.

“Remember the feel of the wild river?” he asked. “How swift the current? How green the trees? How cool the spray?”

“We remember,” the brothers said. “But we like it here.”

One cool autumn day, the two younger brothers were swimming when two fishermen cast a net into the pond, and those two swam right into it.

The eldest brother had been watching carefully, and when he saw they were trapped, he began to think as hard as he could. He had to save them.

He thought and he thought, and soon he came up with a plan.

Sure enough, the trick worked. When the fishermen saw the splashing, one of them cried, “Look, they broke through the front of the net! They’ll swim downstream!” He began to pull at the net.

The other fisherman cried, “But they broke through the back of the net, too! Surely they’ll swim upstream!” So he began to pull at the other end.

As the fishermen pulled in opposite directions, the two brothers who were caught saw their chance. They escaped, and they swam with all their might toward their thoughtful brother, crying, “Dear brother, you saved us from certain death with your wits!”

“So I did,” said the eldest brother. “Now do you believe that thinking is good?”

“Not too bad,” said the youngest.

“Now are you willing to return to the wild river?” the eldest brother asked.

So all three brothers returned to the wild river, and there they lived happily ever after, though many people say the youngest brother never learned to use his wits.