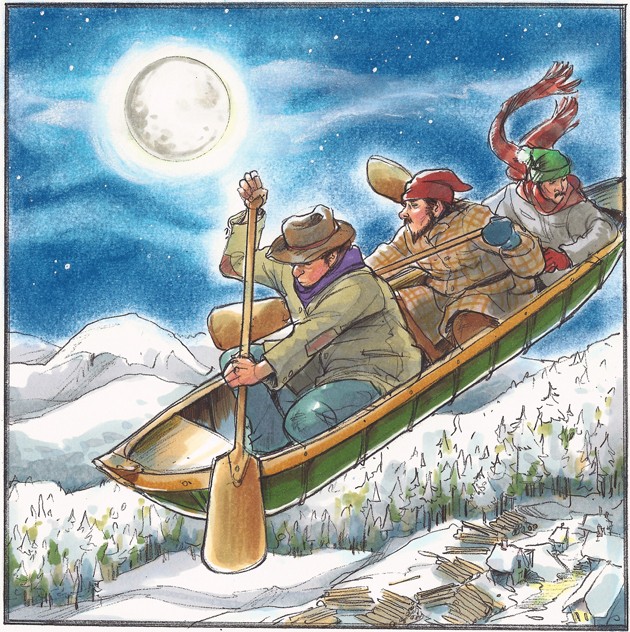 Once upon a time, long ago, there lived a man in Quebec whose name was Jean Baptiste. One day the devil visited Jean Baptiste and offered him a deal.

“If you will give up your God for one whole year,” the devil said, “I’ll grant you a wish. Any wish.”

Well, this sounded fine to Jean Baptiste. Surely one year would be easy, and what did he wish? Ah, he looked out at the sea of snow around him. He thought it would be nice if he could travel with ease in the long winter months.

“Make my canoe fly,” Jean Baptiste said. “If you do, I shall happily give you my soul.”

“Done,” the devil said, “so long as you do not utter the name of your God. And one more thing: You must return the canoe to its starting place before dawn, or you’ll forfeit your soul.”

For many months, he did not think about his visitor. By the middle of winter, Jean Baptiste was working hard in the forest with his fellow lumberjacks, chopping down enormous trees. The work was exhausting. Their limbs were frozen; their backs ached. But worst of all, their hearts were lonely. They had no one but each other as companions. They longed to hear the sound of their wives; instead, they heard only each other thundering, “Timber!” and the thud of trees landing in thick snow.

One night they gathered around a fire and talked longingly of home. They spoke of the fine meals and hugs and kisses, laughter and love. “Ah, mon dieu, I miss my wife!” Jacques sighed.

“Ah yes!” Bernard groaned. Paul and Roger nodded. Louis sighed, “If only we could get home for a night.”

Jean Baptiste could not stand his friends’ sad voices or the longing in his own heart. And then he remembered … “We’ll go home!” he cried.

The others thought he must be mad.

Jean Baptiste winked. “Trust me,” he explained. “I’ve made a deal. I have a canoe that will fly.”

The others could see that the devil had visited their friend.

“Come on,” he said, pointing at the canoe. “Remember, do not speak the name of our lord or fly over a church or touch a cross.”

Several of the men climbed right in, while a few stayed behind, for some had no faith in the promise of the devil; they were certain this would end in disaster.

But those who joined their friend cheered as Jean Baptiste whispered the magic words the devil had taught him. He would not share those words with those who refused to go along.

And once he had uttered those words, the canoe rose into the brisk night air.

“Paddle, friends,” Jean Baptiste said. So each man grabbed a paddle and off they flew through the sky. That canoe sped toward their home.

As the canoe reached their village, the wives came out to study the strange flying machine. When they saw their husbands, they let out a cheer so loud that the men’s hearts rose even higher than the canoe.

“Here we are!” cried Jean Baptiste as they drifted to the ground.

That night everyone celebrated — dancing and singing, laughing and kissing, cheering and shouting with joy.

Jean Baptiste was happiest of all. He twirled his wife around the dance floor. He lifted her into the air. He kissed her and hugged her. He grew dizzy with pleasure.

As the night went on and dawn threatened to break, the other men realized they had to return to camp.

“He’ll lose his soul if we don’t reach camp before dawn,” they whispered to each other. “Hurry, we must find our friend Jean Baptiste.”

They searched everywhere — in his house and in everyone else’s, in cafes and dance halls, in restaurants and pubs. At long last they found him in the inn so exhausted with pleasure that he was asleep beneath a table.

“Hurry up, we must go back!” they cried, but Jean Baptiste did not hear a word. At last the others picked him up and carried him as fast as they could back to the canoe.

One of the men remembered the magic words and mumbled these. Up flew the canoe into the air.

“Paddle!” they cried. And so they did, but just a few moments before they reached camp, Jean Baptiste suddenly woke.

The others turned and looked at him with horror.

“Where are we?” he asked. He was terribly confused.

But it was too late. Jean Baptiste had uttered the name he had vowed never to say, and that canoe turned nose first toward the ground.

Down, down, down the canoe plunged. It finally crashed into the top of a gigantic pine, and cries of despair filled the forest as each man tumbled out and down, down, down.

No one ever saw that canoe again.

And no one ever saw those men again.

So much for a pact with the devil!