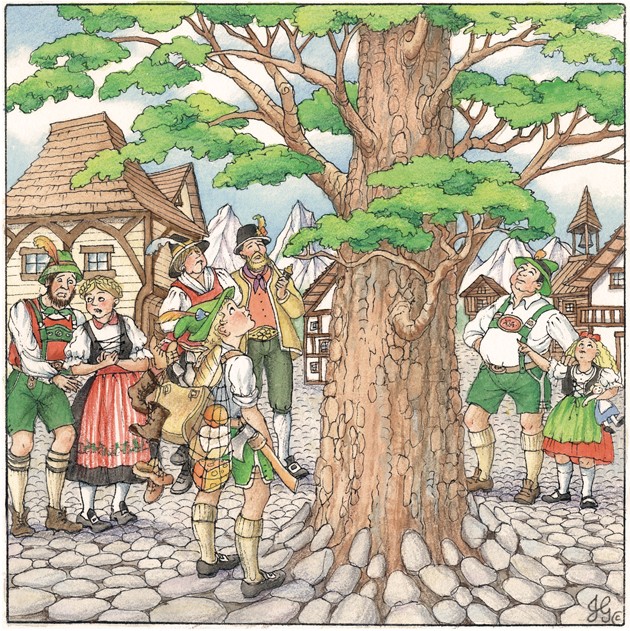 Once upon a time a peasant had three sons, and everyone called the youngest boy, Hansel, a fool. Hansel was different from his brothers, and whenever he tried to do the things they did, he failed. When he failed, his father punished him. He thought that punishment would make his son wise. It did not, but Hansel didn’t mind. He was a cheerful boy.

One day a strange tree began to grow in the center of the village, and everyone was talking about it, for no one knew who could have planted it. The tree grew so fast, before long it was taller than the tallest building, and the next day it had reached the sky.

Soon people’s necks were aching, for they were always looking up, watching the tree growing taller and taller until the top was lost in the clouds.

Word of the tallest tree spread everywhere. When the king’s daughter heard about it, she said she would not be happy until she had a piece of fruit from this tree.

“But,” her father argued, “it’s the middle of winter. Nothing will bear fruit until spring.”

The princess insisted she must have fruit from the tallest tree, and so the king offered a great reward to anyone who would climb to the top and bring his daughter the fruit of the tallest tree.

Hansel’s brothers gave it a try, but they too failed, and so one day Hansel told his father he wanted to try. His father laughed. “But Hansel, your brave brothers failed. How can a fool reach the top?” Hansel insisted. So he packed 12 pairs of shoes, some loaves of bread, hunks of cheese and his little hatchet, and he began to climb.

“He’s climbing hard!” his father gasped. His heart sank, for even though Hansel was a fool, he was a lovable lad.

On the third day another pair of shoes fell to the ground, and on the fourth still another tumbled down.

Meanwhile, Hansel climbed and climbed. When night fell, he found spots to rest. One evening he saw a light shining from a hollow in the tree, and he glanced in.

There sat an old woman rocking in a rocking chair, tending a pot by a fire. Hansel could not resist; he walked right in.

“Good evening,” the woman said, “come have some supper.”

“I wonder if you know how far it is to the top of this tree?” Hansel asked the woman.

She began to laugh. “I’m only Monday, son. You must climb all the way to Saturday, and then you shall begin to understand.”

And so Hansel ate and he slept. The next day he began to climb again. Just as night was about to fall, he spotted another hollow in the tree. Inside, he saw another old woman, this one even older than the first. “Come in,” she said when she saw the lad. Fearless, foolish Hansel walked right in.

“I’m Tuesday,” she told him, “but let me caution you. Do not enter Wednesday’s hollow or you’ll be sorry.”

The next day he began to climb again, and when he saw the light in the hollow, he sighed. He was terribly tired, but he remembered the warning, so he climbed on. At long last he reached Thursday, then Friday, then Saturday, and each old woman was older than the one before, and each offered him supper and a place to rest.

When Hansel departed from Saturday’s hollow, he no longer had any shoes, and the hatchet he was using to carve his way upward was so dull it was worthless as a feather. Still, he was determined to go on, and as he did, he noticed that he felt stronger with each step.

Now he saw the tree had grown into a stone wall. When he reached the wall, he noticed a door with a golden lock and a golden key. He turned the key and the door opened, and there before him was a wide, green meadow full of wildflowers. It was so beautiful that he nearly fainted with pleasure. As he walked into that field, he saw, in the distance, a great city made of gold. It gleamed beneath a golden light, and there he saw the very top of the tree.

On every branch there grew great golden fruits, as round and as bright as the sun.

Perhaps he had. No one knows.

Some people say Hansel stayed just where he was, amid the flowers and the fruit, the green and gold. “Only a fool would leave such a place,” they say.

Others say he came back to Earth to tell the story of all he’d seen up there. They say, “Only a fool would not return.”

What do you say?