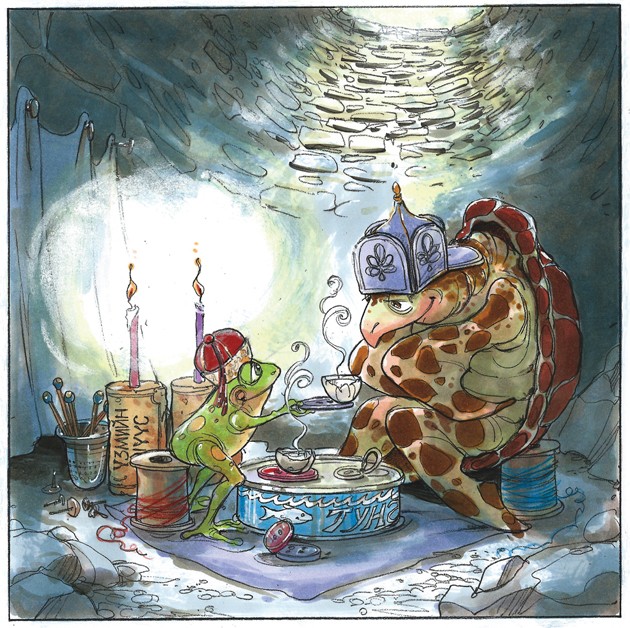 Once upon a time, a little frog lived all alone in a well in a tiny village in Mongolia. He had just one good eye, but this did not bother him. He loved his well. He loved the water. He loved the sunshine and the storms and everything about the world he inhabited. But sometimes he wished he had a friend.

One night, a powerful storm rose up. Sheets of rain pounded the land. The wind shrieked and howled. The little frog was grateful to be carefully tucked inside his well, but there were other creatures who were not so lucky. Not far from the well, the waters of the Uvs Nuur Basin rose higher and higher. All the creatures that lived in those salty waters were stirred and shaken. Suddenly, one enormous wave crashed upon the land, and a great sea turtle was cast ashore.

In the morning, when the storm finally ended, the sun began to shine, and the poor turtle opened his eyes and looked around. He had no idea where he was. He looked in every direction, but no matter how hard he looked, he could not see the Uvs Nuur. Still, he was determined to make his way home, and so he set out on a quest to find his home, his family and his friends.

He walked and walked, and he began to grow tired. He was thirsty, too, but he still seemed no closer to home. Many days passed, and the sun was high and hot. After a while, the turtle feared he was going to die, all alone, out there in the world without a friend anywhere in sight.

“I would do anything to find some water,” he coughed, and just at that moment, as he stumbled along, he saw the frog’s little well.

“Thank heavens!” he cried, and he climbed onto the well and tumbled in. He was so relieved to feel the cool waters surrounding him that he let out a squeal of delight.

The frog, seeing this stranger splash into his midst, cried, “Who are you?” But without stopping to hear an answer, more questions poured out of him: “Where did you come from? What do you want? Who are you? Tell me everything. Tell me all about you, please.”

The turtle was so relieved, he gulped a mouthful of water and answered happily, “I’m turtle. I live in the great Uvs Nuur Basin. I lost my way in the terrible storm, and I was so afraid I’d die of thirst that I had to dive in here.”

“What will you do now?” asked the frog. His mind was whirling with the possibilities of a neighbor and a friend. This turtle could be someone to talk to, someone to swim with, someone to share his beautiful home.

“Well,” the turtle said, after some consideration, “I’d like to go home, but I don’t know which direction to travel. If I leave this well, I fear I’ll die. Do you think I could stay here and be your neighbor?”

The frog was so delighted to hear this request, he could only mumble, “Yes, of course!” over his croaking, pounding heart.

So the turtle floated, resting and relieved, but the frog had a thousand questions, and he could not help himself: “Tell me, turtle, is your home as beautiful and comfortable as this?”

“Well,” turtle said, and he paused. He did not want to be rude, but the basin was so much larger and more beautiful, salty and wild than this tiny well. What could he say?

“Your home is lovely,” he said politely.

Without thinking, the turtle quickly said, “Oh, my home is much larger. It is impossible to compare the Uvs Nuur to this tiny well. My home is so big, no one can measure its breadth and width and length, but this well … it’s a tiny place — a simple place.”

When the one-eyed frog heard this, he was furious. He was certain that there could be no place so large. The turtle must be a braggart, or even worse. Surely he was a liar. Naturally, with just one eye, the well looked enormous to the frog.

And so the frog turned on the turtle and argued, “The Uvs Nuur couldn’t possibly be bigger than my well. You’re lying to me. You’re only trying to impress me!”

“Don’t be foolish,” the turtle said.

“Foolish! You’re calling me foolish?” the frog cried. “Fine thing for a liar to say!”

The turtle could not believe these words. He looked straight into the frog’s one good eye.

“Think whatever you like,” said the turtle, “but the fact is, you know nothing of the world. If you were wise, you would listen to those who know about the great, big world out there. If you were wise, you would pay close attention to those who have experience with life and storms and seas. But since you do not listen, you will remain forever a fool.”

With those words, the turtle climbed out of the well and departed. Better, he thought, to move on than to waste the rest of his time with a fool.