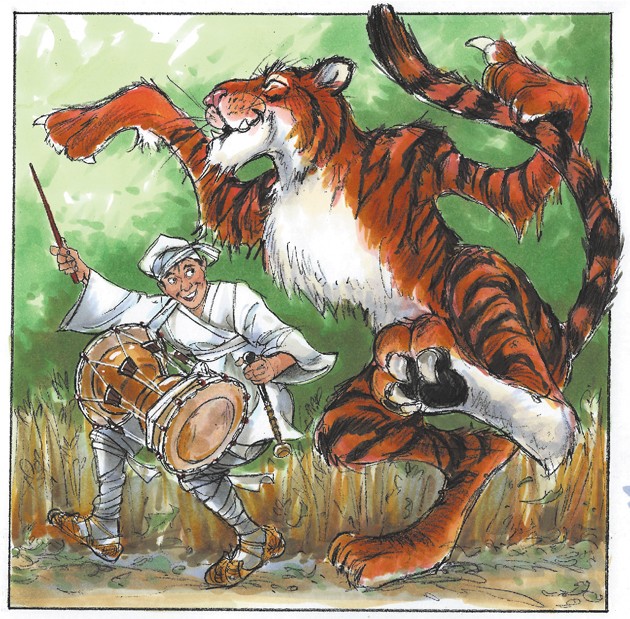 Once upon a time, a poor peasant was dying. He called to his three sons.

“I have little to leave you, I’m afraid,” he said.

“These are for you,” he told them, “but remember, they are only as good to you as your good sense.”

When their father died, the three brothers set out into the world. When they reached a fork, they decided to part ways.

“We will meet back here in one month’s time,” they agreed, and they said farewell.

Carrying his millstone, the eldest son walked to the mountains. When night fell, he laid down beside a tree, setting the millstone beneath his head as a pillow. As he was falling asleep, he heard wild animals, so he lifted the millstone and climbed the tree.

Before long, he heard thieves arguing among themselves about a treasure they had just stolen. This gave the eldest son an idea. He grabbed the wooden handle of his millstone and began to turn.

When the thieves heard the grinding sound, they cried, “Is that thunder? If it’s thunder, why is the sky clear?”

They agreed it must be the fury of heaven. “We must run away!” they cried, and so they did, leaving their treasure behind. The eldest son climbed down and took the treasure.

Thanks to the millstone and his good sense, he was now a wealthy young man.

Meanwhile, the second son walked for days toward the sea. At last, on a dark night, he collapsed with exhaustion. Soon he realized he was lying on a stone in a graveyard, but he was too exhausted to move. He did his best to make himself comfortable.

Suddenly he heard footsteps approaching, and he heard a voice hiss, “Brother goblin! Tonight, we shall steal the soul of the rich man’s daughter.”

The young man quickly calmed himself. He knew he must pretend to be a goblin. “Yes, I was waiting for you,” he answered.

The goblin sniffed the air. “Why do you smell like a human?”

The second son summoned his confidence. “Believe what you wish,” he said.

“Let me feel your head,” the goblin demanded. Thinking quickly, the second son held out his gourd. The goblin sighed, “It is smooth, indeed. But let me feel your arm, just to be sure.”

The second son held out his bamboo staff.

“My, you have gotten thin. How long has it been since you died?”

“Why ask so many questions?” said the second son. “We must hurry.”

“True, let’s go,” the goblin said, and the second son followed the goblin to the village, directly to the house of a rich merchant.

“Wait, and soon I shall return with the daughter’s spirit,” the goblin said, and he sneaked inside and reappeared a few moments later with his hands clasped together. “Here’s the girl’s spirit, right in my hands,” he said.

“Let us put her spirit in my satchel, or she might escape,” said the second son.

“Good idea,” the goblin said, and he poured the spirit into the young man’s pouch.

As they raced back to the cemetery, the village rooster began to crow. The goblin cried, “I must hurry back before sunrise. Meet me tomorrow night and we shall finish our work.”

The second son agreed, but as soon as the sun rose, he ran back to the merchant’s house. There he found the family weeping.

“What happened?” he asked, pretending not to know.

The merchant explained his poor young daughter had suddenly died.

“I’m a shaman,” said the second son. “Let me in and I’ll bring her back to life. But everyone must leave the house. I cannot be bothered while I work.”

Everyone left him alone with the girl’s body. As soon as they were gone, the second son placed his pouch beneath the daughter’s nose and untied the string. Her spirit seeped out of the pouch and into her nose, and a moment later she was sitting up, trying to figure out who the stranger was before her.

The merchant and his family ran inside, and when they saw the girl sitting up, alive and well, they danced with joy.

“I must pay you with a fortune for saving our daughter,” said the merchant.

So the second son was paid well for his kind deed. Thanks to his father’s gifts, he became a rich, happy man.

Meanwhile, the youngest son traveled to the forest. There, delighted by its beauty, he sang and played his drum. Soon he saw a tiger, and when he pounded on his drum, the tiger danced. Before long they were dancing together, as the youngest son continued to sing and beat his drum.

They did not realize they were near a village, and when the villagers saw the dancing drummer and tiger, they thought they must be a traveling show and tossed money to them. This gave the youngest son an idea.

He and the tiger began to travel from village to village, performing their dance. When news of the drummer with the dancing tiger reached the king, he insisted he must see a performance.

And so the youngest son and the tiger came to court and performed for the king.

The king was mightily impressed. “I’ll pay you whatever you wish for that tiger,” he told the youngest son.

“Your majesty, this tiger is a family treasure. I cannot sell him.”

The king kept offering more money, and still more. At last the youngest son gave in and became the richest son of all.

On the first of December, the brothers met again. Together they celebrated all their good fortune and gave thanks to their father, who had taught them to understand that our good sense always serves us best.