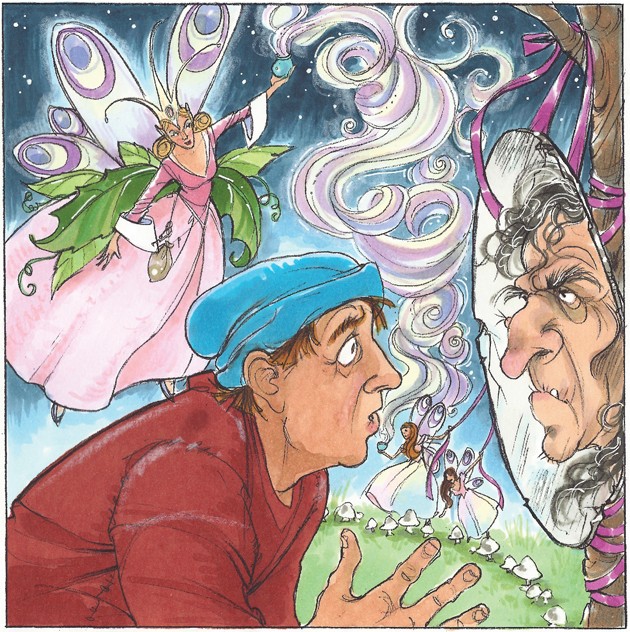 Just off the northern coast of Wales, on a little island, there lived a band of fairies. One day, the Queen Fairy’s daughter decided she wished to see the world. Her mother gave her the power to turn herself into a bird, and off she flew.

She returned that night and told her mother she had met a kind young farmer who lived near Holyhead. A witch had cursed the poor fellow and his cows, leaving them in ill health. The witch had the power to turn herself into a hare, and though the villagers and hunters forever chased her, she could not be caught. A miser who owned the town mill had helped her to hide.

The Queen Fairy’s heart broke for the farmer’s pain. “We must help him,” she said.

So she gathered her small blue pot, her wand and her healing potions and set off to find the farmer.

She knocked upon his door. “I’ve come to cure you of your curse, if you wish and if you believe,” she said.

His face lit up at once with delight. “Please, yes!” said the farmer. “I shall be in your debt.”

The Queen Fairy placed her small blue pot in the center of the farmer’s modest dwelling. She tapped it with her wand. A moment later, the room swirled with scents of her healing potions. Then the Queen Fairy called to her fairies, and moments later, six of them appeared, and together they chanted their healing song. When they were done, the Queen Fairy again touched her wand to the small blue pot.

In that instant, the farmer’s skin, pale as snow, flushed with color. His unsteady limbs grew strong again. He felt blood pumping through his veins and he heard his cows mooing from the fields with newborn vigor.

He knew the curse had been lifted. “How can I repay you?” he asked.

The Queen Fairy smiled and said, “Go to a plot of land on the cliffs and make a fairy ring there. Build three walls around the ring, but leave a space open to the sea. In this way, our people will be able to come and go easily.”

The farmer followed her directions and built the fairy ring.

But the Queen Fairy knew she must find a way to overcome the witch’s power, and she knew the only way to do that was by the arm of a man.

“I’ll need a brave and strong man,” the Queen Fairy said to her daughter.

Her daughter replied, “What about the farmer? He is strong and brave.”

And so the Queen Fairy called upon the farmer once more.

“Come with us to the fairy ring,” she said, and when he arrived, he found dozens of fairies there. They were planting a pole in the ground.

When the pole was planted, the fairies hung a mirror from the pole, and they fastened a streamer from the top of the pole. They began to walk in a circle around that pole.

Each fairy held a bell in one hand and a cup of burning perfume in the other.

“Follow me,” the Queen Fairy said to the farmer, and so he did, joining them in the circle.

“Look in the mirror,” the Queen Fairy said. “What do you see?”

The farmer looked. “It’s the witch,” he said, and, sure enough, there was her reflection. So, once again, the fairies marched around the pole.

“Now, look again,” said the Queen Fairy, and this time when the farmer looked into the mirror, he saw the hare.

They circled a third time, and this time when he looked into the mirror, the farmer saw the hare running into the mill, and he understood this was where the witch found her protection.

“Tomorrow, we shall meet at the mill,” the Queen Fairy said.

The next day at noon, right on time, the farmer met her at the door to the mill. She handed him a sling and a stone.

“I have blessed you with this stone,” she told the farmer. “When the village clock strikes three, you must climb the hill and stand in the middle of the fairy ring. Stand very still until you hear the click of the mill. Then throw a stone with all your strength. You must strike your target.”

The farmer followed the Queen Fairy’s directions, and just after three, he heard the click of the mill. He looked up and saw the hare racing toward the mill, and he threw that stone with all his strength.

The stone reached its target, lodging itself in the hare’s skull, and once more she transformed into a witch.

The farmer called to all the hunters to come help, and so they did. They fastened the witch’s body to a horse and dragged her to the bottom of the valley, where they buried her in a grave so deep, she would never escape.

When they were finished, the farmer began walking home, but once again the Queen Fairy appeared before him.

“Meet me at the ring tomorrow,” she said.

“What do you see in the mirror?” she asked.

They marched once more, and this time he saw a back turned to him.

On the third round, he saw a spring door opening, and the Queen Fairy smiled.

“Walk through that door. You will see the miser is selling a cupboard, and you must buy it.”

This he did, and when he reached home with the cupboard, he opened the drawers, and he discovered they were filled with gold.

It is this way with fairies. They offer health and happiness and prosperity to those who trust in their ways.