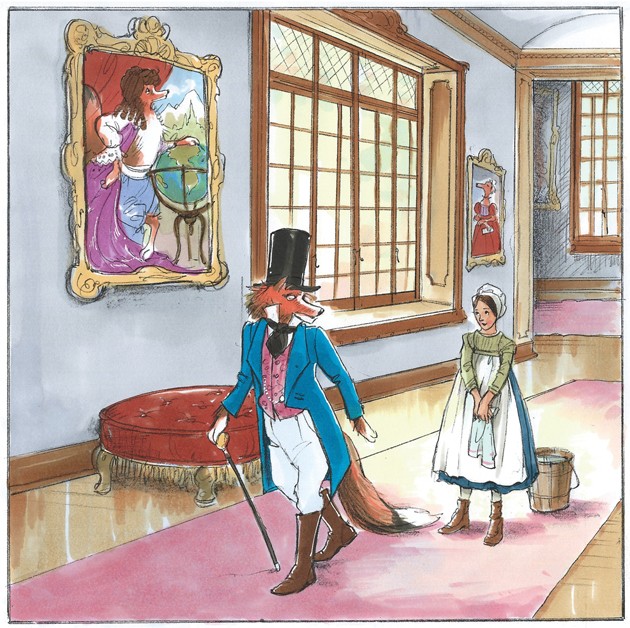 Once upon a time a woman had two daughters, Glenda and Carys. One day she gave each girl a beautiful glass ball. “These are to say I love you,” she told the girls.

The girls cherished those glass balls from their mother and loved to toss them to each other. But one spring afternoon as they were playing, Carys accidentally threw hers over the garden wall. It landed in the neighbor’s yard.

The girls were terrified. You see, a fox lived next door, and he never talked to anyone. Still, Carys could not stand the thought of losing her ball, so she bravely walked to the fox’s house and knocked on the front door.

When he answered, she blushed and said, “I’m very sorry, but I have lost my ball in your backyard. May I go get it?”

“Certainly,” said the fox, “but you must first come inside and be my housekeeper for a year. Otherwise you’ll never see your ball again.”

Carys could not bear to lose her ball. She feared her mother would be heartbroken, and so she agreed to the fox’s terms and moved into his house.

Carys was comfortable and even happy living there. The house was big, and beautiful and airy, and there was little work to do. She seldom saw the fox. He left every morning at dawn and did not return until midnight.

One morning, just as the fox was preparing to leave, he called to Carys, “I am going away, and while I’m gone you must make sure that you do not do five things: Do not wash the dishes. Do not sweep the floor. Do not dust the chairs. Do not look inside the cupboards. Most importantly, do not look under my bed!”

With that, the fox departed.

Of course, as soon as he was gone Carys began to wonder about the dishes and the floor, the chairs and cupboards and most of all, what might be under the fox’s bed.

As time passed, she grew more and more curious. On the second day, she decided to see what would happen if she broke the fox’s commandments.

And so she washed the dishes. When she had finished the last one, a big bag full of copper fell down from the ceiling and landed at her feet.

This was wonderful, so she decided next to sweep the floor.

The moment she had finished, a bag of silver fell at her feet.

“Marvelous!” Carys squealed and clapped her hands, and naturally, she dusted the chairs. When that was done, a bag of gold appeared.

“Perfect!” she said, and so she looked inside the cupboards, and sure enough there she found her glass ball.

Carys was overjoyed. For one moment she thought of running away with her treasure, but she could not quell her curiosity. She ran upstairs.

She bent down and looked under the bed.

And there was the fox!

Terrified, she turned and ran downstairs and out the door and through the garden and into the street.

As a horse ran past, Carys called out, “If you meet a fox today, do not say I’ve passed this way!” The horse neighed, “OK,” and on Carys ran.

As she passed a cow, Carys yelled, “If you meet a fox today, do not say I’ve passed this way!” The cow lowed, “OK,” and on she ran.

As she passed a mule, Carys cried, “If you meet a fox today, do not say I’ve passed this way!” The mule brayed, “OK,” and on she ran.

Soon Carys passed a dog and was almost out of breath when she said, “If you meet a fox today, do not say I’ve passed this way.” The dog barked, “OK,” and on she ran.

When Carys met a cat, she urged, “If you meet a fox today, do not say I’ve passed this way.” The cat meowed, “OK.”

Now Carys ran into the woods and heard an owl hooting. “If you meet a fox today, do not say I’ve passed this way,” she whispered to the owl. “Whoo-hoo, OK!” hooted the owl.

But the fox was not far behind. When he came to the horse, he asked, “Sweet horse, have you met a maid of mine?” The horse whinnied, “She passed by.”

And soon the fox came to the cow and asked, “Lovely cow, have you met a maid of mine?” and the cow mooed, “She just passed by.”

The fox kept running, asking each creature in turn — the mule, the dog, the cat — where his maid had gone, and each one answering the same way: “She just passed by.”

The fox finally came to the forest, and he looked up at the owl and asked, “Have you met a maid of mine?”

The fox turned one way, then another. “Which way did she go?” he asked the owl.

“Whoo-hoo,” hooted the owl. “Go through that gate and across that field and behind those woods, and you may find her.”

So the fox ran through the gate and across the field and into the woods. But by then, Carys had returned home.

The fox never found her.

And Carys? Well, she enjoyed a long and happy life, still curious and still fun-loving. But from that day on, she was a little more careful.