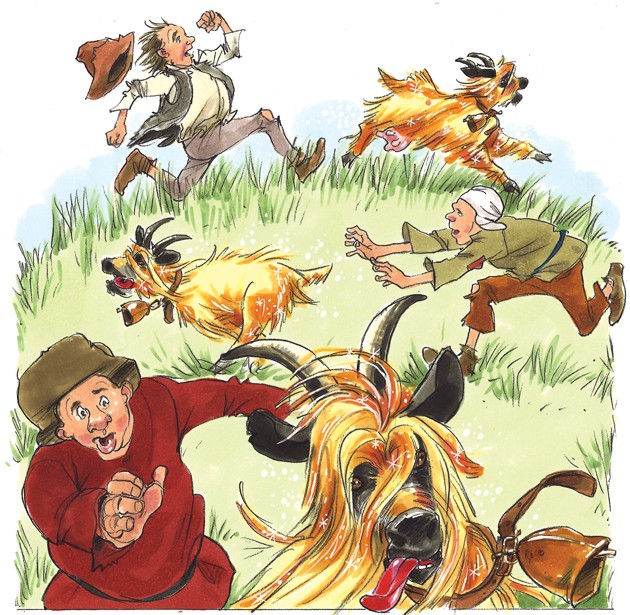 September 10, 2013
The Goats with the Golden Fleece

Once upon a time, a carriage drawn by three golden goats rode past a field. Suddenly the goats escaped the carriage and dashed into the field where three field hands, Oskar, Bjorn and Leo, reached out and captured them.

The men began to stroke their golden fleece, amazed by its luster. “Thank you for catching my goats,” the carriage driver, a beautiful woman, said as she approached. “They’re magical.”

“Yes, I’m a fairy. And to repay you for capturing them, I offer them to you as gifts. Take care you watch over them. If they escape, they’ll dash back to my castle and you’ll never find them again.”

Oskar’s heart swelled with happiness, and Bjorn clapped his hands with joy, and Leo bowed and said, “Thank you. We’ll take good care of them.”

The three hurried home with their goats, and they sheared their golden fleece. As they had imagined, the fleece sold for more money than they had ever dreamed of having. Oskar quit his job. Bjorn did too. But Leo kept working. “We mustn’t be greedy,” he said.

They branded the goats with tar between their horns so that if ever they were to run away, they would recognize them. Oskar and Bjorn also tied ropes around their goats’ horns and hired men to look after them. But Leo kept his goat close and took him everywhere he went.

When they sold more fleece, Oskar and Bjorn moved into a great palace, where they dressed in fine clothes and ate fine food and began to address themselves as Lord Oskar and Lord Bjorn.

And Leo, too, made a great deal of money. He built himself a lovely house, but still he took his goat everywhere and was always petting him and talking to him. Before long, his goat was so tame that he needed no rope. He followed Leo everywhere and came to him with a whistle.

One day, Leo decided to wind his goat’s golden fleece into yarn. He placed the fleece upon his goat’s horn, pulled it across his head and began to twist. The thread grew longer and longer. Suddenly the goat jerked his neck, and the thread tightened and stretched. “Good boy!” Leo said. He understood he had more than a goat; he had a partner.

When he had pulled the fleece into yarn, he wound the yarn around the goat’s horn. As if he had always done this, the goat began to sway his head from side to side, helping Leo to create balls of golden yarn. Those balls of yarn fetched even more money in the market than the fleece, but Leo thought he was rich enough, so he began to give his money away to the needy.

Oskar and Bjorn laughed at Leo. “You’re a mere goatherd,” they teased, while they spent their days taking long baths and meandering through the fields they had once worked, feeling sorry for those who had to work.

Then one autumn morning, one of the stable boys at the palace began to shout, “Oskar! Bjorn! The goats have run away!”

Hearing this news, Oskar and Bjorn raced to the barn. When they saw their goats dashing into the woods, they gave chase. They ran and ran. At long last, they were deep in the woods. And there before them stood the fairy’s castle.

She stood at the door awaiting them. “I knew you would come for your goats,” she said. “They joined us earlier, but as I warned you, you’ll never find them.”

It was the fairy’s turn to smile. “Ah, but all my goats bathe in the stream out back, and the magical stream washes away every mark.”

The two began to search the barn, looking at this goat and that goat. Before long, Bjorn was sure he recognized his goat. He grabbed a rope and tossed it around the creature’s neck and began to pull. The goat only pulled back. Soon the other goats surrounded Bjorn, and one of them butted him out the door and down the hill.

Seeing this, Oskar gave up and chased after his friend. The two returned to their village without their goats, sad as sad could be. And as they were walking, they came upon Leo, who was running toward the woods.

But Leo made his way to the fairy’s castle. When he told her his goat was missing, she beckoned him to search the barn, and search he did. He stared into each goat’s eyes. His heart was breaking. “Where are you, my friend?” he asked, one after another.

“I suppose I’ll have to say goodbye,” he said, “but may I take a lock from each goat to remember my friend?”

The fairy agreed, and so Leo clipped one small lock from every goat. When he had a handful of yarn, he tied it to a barn post to twist it into thread, and as he pulled and twisted, out of a stall stepped one goat. The creature hurried forward, bent his head and slipped his horn into the thread. He began to pull.

“You’re mine!” Leo cried, and that is how he and his goat were reunited, and they lived happily ever after.