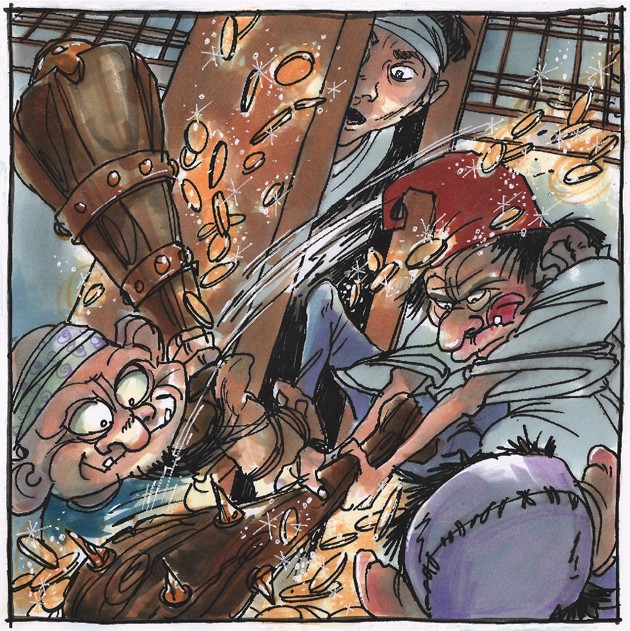 Once upon a time, there were two brothers who were very different. The older brother was spoiled and lazy, but Chun, the younger brother, worked day and night as a woodcutter. Chun woke every morning at the crack of dawn to go to the forest to cut and gather wood, and he shared all his earnings with his mother and father as well as his brother and his brother’s wife. He never complained.

One day in the woods, Chun was tired, and he lay down to rest beneath an oak tree. An acorn fell to the ground beside him, and then another and another.

“I’ll take these to my mother and father and to my brother and my brother’s wife,” he said. He put the acorns in his pocket and started back home.

Suddenly, darkness fell, and Chun was lost. He heard the call of the cuckoo bird, and he began to walk in circles, shivering with cold and fear. After he had walked for many hours, he came to a house. Relieved to find shelter from the nighttime chill, he knocked upon the door. When no one answered, he tried the handle, and he was pleased when the door opened. Once inside, he relaxed, but too quickly he heard voices in the doorway.

Fearful, he hid inside a closet, leaving the door open only a crack so he could see who lived here.

When he saw a gang of goblins walk through the door, he was horrified. Each one carried a club, and Chun stared as the goblins gathered in a circle. He held his breath so they would not hear him, and soon they began to pound their clubs upon the wooden floor: thump, thump, thump.

Chun could not believe his eyes!

He watched as they continued to pound those clubs, and he listened as they changed their chant.

Chun began to fear the goblins might discover him — and he was terrified of what they might do if they knew he had seen their magic.

But suddenly Chun’s stomach began to rumble with hunger.

The goblins stopped pounding their clubs and looked around. “What was that sound?” one of them asked.

Another said, “That must be thunder … we must be careful.”

But Chun’s stomach would not stop grumbling, and he knew he must find some way to quiet it. He felt the acorns in his pocket, and as quietly as he could, he took one out and put it in his mouth.

But to his horror, when he bit down, he heard a thunderous crack.

“Get out!” the goblins cried, leaping to their feet. “The roof will fall down upon us if we don’t escape!”

Chun’s heart was thumping with fear, but he did not move an inch as the goblins fled out the door and disappeared. All night long he stayed right where he was, fearful they would return and find him.

But at dawn, he tiptoed out of the closet, and looked at the treasure all around him. As quickly and as carefully as he could, he filled his sack with as many riches as he could and raced to the door. There he saw a goblin’s club left behind, and he took that too!

He raced home as fast as he could. Back home he built a beautiful big house, and he moved his parents into the mansion. Whenever they needed money, he simply thumped his club upon the ground and chanted, “Make gold, make gold, make gold,” and whatever he asked for then appeared.

When his brother saw Chun’s fortune, he was terribly jealous, and he demanded to know how his brother had made his fortune.

Chun loved his big brother, and so he told him the story with every tiny detail. But his brother was so busy thinking of how rich he might become that he did not listen carefully.

That night Chun’s brother walked into the hills, chopped firewood, and then, just as his brother had, he sat down beside an oak tree. When he heard an acorn fall, he picked it up, just as Chun had. But instead of thinking of his parents and his wife and his brother, he thought only of himself. “I love acorns,” he said. “These will make me very happy.”

When his pockets were full, he walked in search of the house Chun had described. When he found it, he waited until it was dark and he heard the cuckoo’s call. Then he walked inside the house and hid in the closet.

Just as Chun had explained, the goblins soon entered and began to pound their clubs and chant, “Make gold, make gold.”

But the older brother was so excited that he couldn’t wait to scare the goblins away. He put an acorn in his mouth and bit down hard. Then he heard the loud CRACK and waited for the goblins to flee.

He peeked out of the closet after a while, but the goblins were standing there, waiting for him. “You greedy fool,” they cried. “You are a thief!” And they began to beat him with their clubs.

Before long, Chun’s brother was flat, long and skinny and stretched as thin as a pole. When the goblins were finished with him, they let him go, and he staggered back home with no treasure, no acorns and no club. He didn’t have so much as a stick of wood.

When Chun saw him, he shook his head, and his brother wept. “I have learned my lesson,” he said softly.

But no one was quite sure if knew that by putting himself above others, he paid a painful price for his greediness.