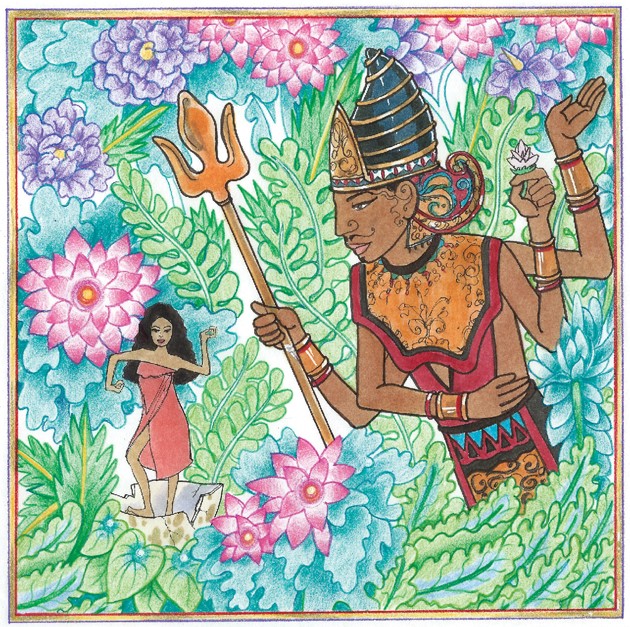 Once upon a time long ago, the chief god in heaven, Lord Batara Guru, gathered all the other gods for a meeting. “We must create a new palace,” Lord Guru announced. “I wish it to be beautiful and comfortable and suitably important, and I will need every god’s help in building it.”

All the gods agreed to work together. One god would bring wood, another tile, another glass and so on. The gods were delighted by the idea of working together to create something so important and special.

But as all the others chattered excitedly, one of the gods, Narada, noticed that his friend Anta did not seem happy at all. He looked down and seemed to be paying no attention, and when the others rushed off to do their work, Anta slowly departed.

Narada followed him home, and when he reached Anta’s place, he found his friend looking depressed, coiled into a corner.  You see, Anta was shaped like a snake.

“How can I possibly help?” he asked Narada. “I have no arms and legs like all the rest. I am useless.” And with those words, three tears dropped from his eyes.

As those three tears touched the ground, they turned into three eggs. The gods stared. For a long time they just waited to see what would happen, but nothing did.

Narada finally said, “These eggs are a good sign. Take them to Lord Guru and tell him of your troubles, and he will know exactly what to do.”

Anta carefully picked up the three eggs in his mouth and set off for Lord Guru’s palace. He moved slowly across the earth, holding those three eggs with strength and gentleness. He stared straight ahead, determined to safely bring the eggs to the palace. He was so focused on his task that he did not hear the wings flapping above him. So when a voice beside him spoke, he was startled and almost dropped the eggs.

There, standing before him, was his friend, the exquisite garuda bird.

“Good day, my friend,” the bird said. “Where are you heading?”

Anta could not answer, for he held those eggs in his mouth, so he simply looked into the bird’s dark eyes and tried to smile.

This upset the garuda bird. Anta could see the upset in his ruffled feathers.

“Why are you ignoring my question, friend?” the garuda bird asked.

Again Anta was silent. What could he do? This time the garuda bird flapped his wings and brushed them against Anta’s body. He thought Anta was too arrogant even to answer.

And so he asked his question again, but again Anta remained silent.

Now Anta raced away and hid in the tall grasses. He held on to the last egg, his third, as tightly as he could. Aching, bleeding and terrified, he weakly slithered through the grass to the palace.

There he offered the egg to Lord Guru and explained all that had happened.

Lord Guru was grateful for Anta’s thoughtfulness. “Thank you very much,” he said. “I understand, and you do not have to help build the palace. Please take this egg home and care for it until it hatches. When it has, please bring it back to me.”

Anta was happy to do this. He carried the egg home and tended to it for several days.

At last the egg cracked. To Anta’s surprise and joy, a beautiful baby girl was inside, and as Lord Guru had requested, Anta brought the girl to the palace.

Lord Guru and his wife named the child Sang-Hyang Sri, and they raised her as one of their own. As she grew, with every passing day, she became more beautiful. Everyone who saw her fell in love with her.

When she was old enough to marry, her stepfather could not imagine letting anyone else marry this girl, for he loved her. He decided he must marry her.

This idea so upset the other gods that they knew they must stop this marriage. They were certain if these two married, disaster would strike, and so they began to plot a way to separate the two.

At last they decided they must poison Sang-Hyang Sri. After they did, they buried her in a secret place.

Everyone wept and mourned her loss. For it was true: Everyone had loved her.

And then, to the amazement of the gods, in the spot where she was buried, plants began to grow out of the soil. In the spot where her head was buried, a coconut tree grew. In the place near her eyes, rice plants emerged. Other plants grew above other parts of her body. And each one of these became a plant of sustenance for the people.

Since that time, the people of Bali have worshipped the Goddess Sri, and they recognize that the magic and bounty of nature is everywhere around them, all the time.