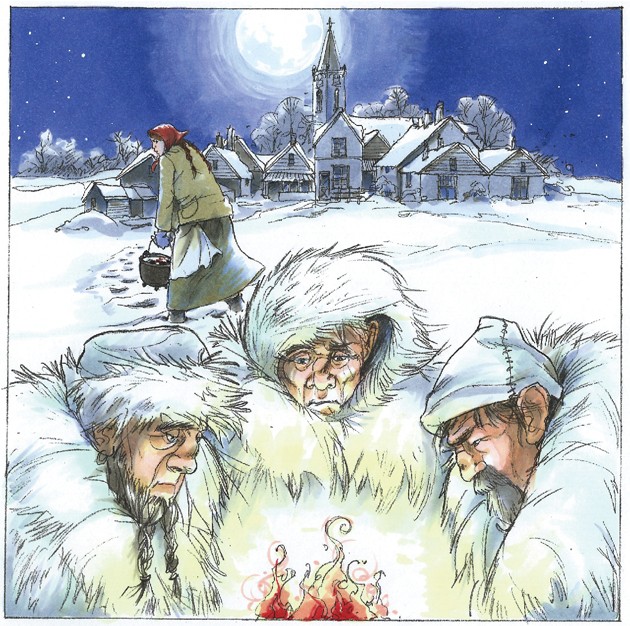 Once upon a time, a miller lived in a tiny Swiss town. He was a good man who was generous to everyone and always had a kind word to offer.

One day, the miller learned that his aunt had passed away. Unlike the miller, his aunt had been a miserly, greedy and suspicious woman. She had amassed a great fortune, and she never spent a single coin. She lived alone in misery all her life. The miller decided he must go to her funeral to pay his respects. He knew all the relatives would be there — everyone would want a share of her money. He decided that if she had left him anything, he would give it to the others.

And so the miller instructed his servant to prepare his carriage and horse for an early morning departure. Then he called to his maid, Lena.

“I will leave at dawn,” he said. “Please be sure my breakfast is ready.”

Lena always followed the miller’s orders, for he was kind to her, and in return she gave him her generosity. She went to bed early in order to be awake in time to prepare his breakfast.

A few hours later, Lena woke up and gasped — the room was as bright as day, and she thought it must be morning. In truth, the room was bright because the light of the full moon reflecting upon the snowy ground poured into the room.

Downstairs, Lena sat to light the fire, but the wood was too damp and would not spark. She began to fret. She peered out the window to see if the sun was beginning to rise over the horizon, but she saw a fire blazing in the nearby meadow.

Lena pulled on her scarf and boots and ran outside to collect some of the coals from that fire. When she reached the meadow, she saw three men sitting around it. They were pale and dressed all in white, and they sat in the snow as if the cold did not trouble them at all. Lena thought they must be relatives of the miller, waiting to travel to their aunt’s funeral.

She smiled and asked, timidly, “Might I take a few of your coals to light a fire for the miller?”

The three men said nothing and did not move. They did not even blink.

Lena thought they hadn’t heard her; the wind was strong. She carefully reached in, and with her gloved hands, picked up a few of the burning coals.

“This is for the miller’s breakfast,” she repeated and hurried back to the house.

She poured the coals onto the hearth, but the moment they touched the wood, they turned cold. Lena was puzzled, but she had to start a fire; she hurried back to the men, this time carrying a pot. Once again, she reached in for some coals, and, once again, the coals turned cold back at home.

Just then, poor Lena heard the floorboards above her creaking. Certain that the miller was awake, she raced once more out to the fire. This time she carried a shovel.

She dug up dozens of coals and whispered, “Thank you.”

Just as she turned back to the house, one of the men said, “You have taken enough.” Lena looked into his pale eyes and trembled with fear. She ran back to the house as fast as she could and poured the coals onto the hearth.

Again, she had no luck. These, too, turned cold.

Just at that moment, the clock struck midnight. Lena could not believe her ears.

“It’s so early,” she said, sighing with relief.

But as she began to walk upstairs, Lena heard a thunderous noise rumbling through the house. When she reached her room, she looked out the window. To her astonishment, the fire and the men had vanished.

This terrified the poor girl, so she dived into her bed and hid herself under her blankets. Within moments, she fell into a deep, dreamless sleep.

At dawn, the miller walked downstairs. He found no breakfast and no Lena. He walked to the hearth to see if she had prepared his porridge and had gone to sleep again, but when he looked into the hearth, he saw layers of gold coins there.

He called upstairs: “Wake up, Lena! Come downstairs at once!”

Through her sleep, Lena heard the miller calling. Alarmed, she opened her eyes and saw that she had slept too late. She hurried downstairs.

“I’m so very sorry!” She stopped when she saw the gold.

“Lena,” the miller demanded, “what happened to the fire? Did you make the porridge this morning?”

Lena looked down and shook her head. “I am so sorry, sir, it was a strange night,” and she told him everything that had happened.

“Very well,” the miller said. “You are obviously supposed to share this gold with me.”

And so he divided the gold, giving half of it to Lena and keeping half of it for himself. But he shared his half with all his servants, employees, relatives and friends. He understood that genero