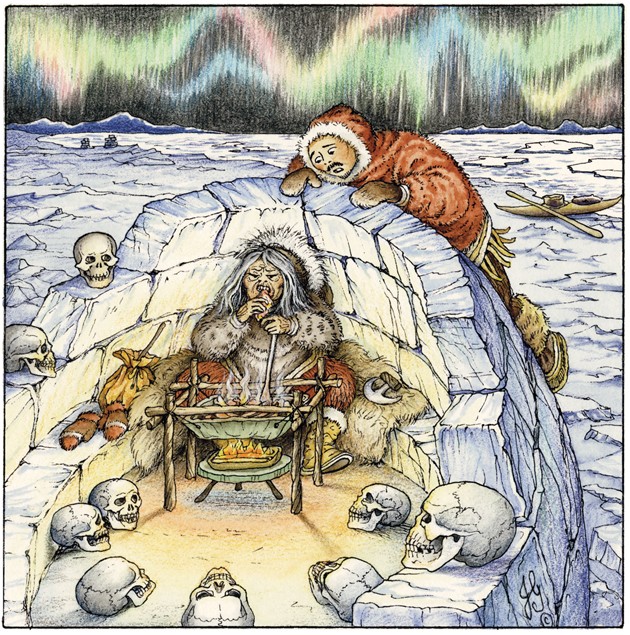 Many people tell tales of Kiviuq, the great shaman and arctic wanderer. People speak of his many adventures, his courage and strength, and though no one knows precisely when he was born, they all agree: Kiviuq is alive still, and people say his spirit of courage and adventure fills the arctic air.

Kiviuq was not only courageous, he knew everything — how fog was created, when the first ice appeared, how to talk with animals, and how to sing his way past obstacles great and small. He could heal and charm. In Kiviuq’s wisdom there was wisdom for everyone.

Many say his father was a Tuutalik — half man, half seal — with great hunting powers. In winter, when the sea was rough and the winds unrelentingly wild, Kiviuq’s father led the hunters to the seals’ breathing holes in the ice. In this way he helped the people to survive the long, harsh winters.

Alas, one day he dived into a hole, and when he rose to the surface, the men betrayed his trust and speared him. He died, and on that day Kiviuq became an orphan.

He lived in a camp among his people with his grandmother.

They say that one day his grandmother instructed him to comb the beach to find a seal skin and to bring it home. She told him she wished to avenge his father’s life, and so Kiviuq did as she had asked.

When he returned with the skin, his grandmother dried it and chewed it with her teeth to soften it. As she worked, she chanted a song, and as she chanted, the skin grew larger and larger. When she chewed, it grew softer and stretched wider still. Before long, the skin was large enough to fit her grandson.

This was her plan.

The men who had killed his father were waiting at the mouth of the river where the caribou crossed the ice. They were ready for their caribou hunt, but Kiviuq’s grandmother had other ideas. She instructed her grandson how to swim out to that spot, just past the caribou, and to show himself to the men. They would think he was a baby seal, and they would want to catch him.

Sure enough, when the hunters saw what they believed to be a young seal, they rushed to their beached kayaks, jumped in and paddled out to sea.

Kiviuq stayed just ahead of them, diving in and out of the water, weaving between the kayaks to tease the men. He did this just as his grandmother had taught him to do.

At long last the land was invisible behind them, and Kiviuq cried out, just as his grandmother had taught him. A moment later a fierce wind began to blow; this was his grandmother calling up a storm. The waters grew choppy, the waves wild and huge. In their kayaks the men lost control, and they began to drown.

Before long only three men remained in two kayaks. They lashed two kayaks together, but after a long time fighting those waves, their strength gave out. Kiviuq dived into one of the kayaks.

In his kayak, Kiviuq paddled to shore. There he removed his sealskin, and once more as a young man, he continued on his journey. He paddled the waters, keeping close to shore.

Before long he came to two inukshuks, stone markers holding the spirit of the people who built them. These two stood side by side onshore, and soon Kiviuq heard voices calling to him, “Beware the clamshells. They will get you.”

Kiviuq turned and looked behind him, and sure enough, two clamshells were chasing him. They opened and closed their shells as they chased after him and cried, “The old ones are lying!”

However, Kiviuq raced away. He could not know what was precisely true.

When he saw a house on shore, he pulled his kayak to shore and walked toward it. He saw that the house had no roof, and so he hauled himself up the side and looked down, and there he saw a large woman stirring a pot of human flesh. Skulls surrounded her.

Suddenly a drop of sweat from his forehead splashed onto the floor at her feet, and she looked up and roared. “I will get you!” she cried, waving her ulu, a knife made of an antelope’s antler.

Kiviuq jumped down and ran to his kayak. He pushed his kayak into the water and paddled away. The evil woman began to chase him alongshore, and she sliced at a rock. It broke in two, and she cried, “This is what I would have done to you!”

Kiviuq looked ahead and saw a piece of drift ice. He threw his harpoon toward it, and he split the iceberg in half.

“And this is what I would have done to you!” he cried to the woman.

And so it was she, the woman known as Igutsaqjuaq, who knew she had been defeated, and she became one of the first to witness Kiviuq’s remarkable powers.

Thus it was that Kiviuq had avenged his father’s death. He went on to become one of the mightiest figures in arctic legend.