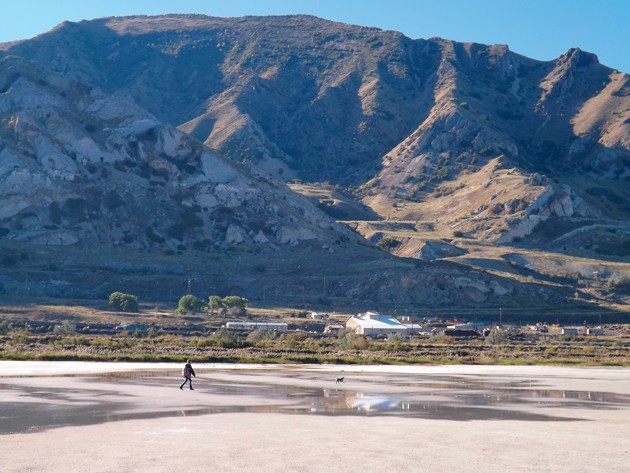 A hiker strolls along the Great Salt Lake’s shoreline near Interstate 80.

In last week’s “Outdoor Adventure,” we reviewed some basic facts about the Great Salt Lake. We’ll discuss an access point where you can get an up-close and personal look at the lake, which in some cases will be awe-inspiring and in others foul and disgusting.

If you choose to try the suggested path, consider the statistics and other information previously discussed. If you can put up with some of the lakeside discomforts, a walk along the shoreline, where it fronts against the Oquirrh Mountains, can be interesting and exciting.

About 100 yards north of Interstate 80 on the shore of the lake near the Exit 99 sign in Tooele County, there is a curious rock formation. It is not large and if you are not specifically looking for it as you whiz by on the interstate, you won’t even notice it’s there. It is, however, a significant outcrop and a destination for a walk and exploration along the shore of the lake. Due to its shape and to my knowledge, no other assigned name, my daughter and I refer to it as “Nose Rock.”

To get to the start point, follow I-80 east from Tooele County to Exit 104, the “Saltair” exit. Turn left and proceed over the freeway and then make another left turn onto the frontage road in front of Saltair. Follow this paved road for about a mile to where it bends towards the Great Salt Lake Marina. At this point, continue straight on a rocky, un-paved road for about one-half mile to a place called Black Rock.

Black Rock is a prominent outcrop that is visible from the interstate on the shore of the Great Salt Lake. You will know that you are in the right place because the road ends at Black Rock. Be wary of trains as you pass under the freeway on approach to Black Rock. You want to avoid the vicinity of the tracks in order to avoid catastrophe. Another word of caution here is that you don’t want to be in this area after dark. It gives me the impression that it is frequented by some unsavory individuals when it is dark.

Disclaimers aside, Black Rock is an interesting place to explore and is the start point for adventure. Park your vehicle at Black Rock and then head west along the shore of the lake.

The world is a canvas before you and depending on the time of day, nature paints incredible scenes here. In fact, if I had to choose, I would agree with John Muir that Black Rock and the shore of the Great Salt Lake offers the best place in Utah to observe sunsets. This area has held captive the imaginations of Native Americans, whose petroglyphs can be found on the rocks along the periphery of the lake, in addition to explorers and mountain men like Jedidiah Smith, Jim Bridger, Mormon pioneers, and government surveyors such as Albert Carrington, Lt. John Williams Gunnison and Capt. Howard Stansbury.

Even though the landscape has changed due to human settlement and subsequent construction of roads, smelters, resorts and marinas, the lake’s vast beach and seemingly endless vistas are awe inspiring to this day. To fully enjoy them and appreciate the size of the lake and the abrupt rise of the Oquirrh Mountains, continue west on foot from Black Rock. The beach in this area is wide due to drought. There are numerous brackish and fresh water springs that emanate from the base of the Oquirrh Mountains that spread out in tiny rivulets as they head across the beach to the lake.

Most of these streams end in a pool of their own creation short of the lake and others simply sink into the sand. This stretch of beach may look dried up from the interstate, but once you get on the ground, these water courses, bogs and pools present considerable obstacles. In a few places you either have to take a long detour to get around them or you are simply going to get your feet wet in some sandy, salty, slimy brine.

As you trudge through the sand, immediately to the south the massive bulk of the northern terminus of the Oquirrh Mountains rises abruptly to an elevation of over 9,000 feet from the lake’s 4,200 foot level, which is a vertical rise of nearly 5,000 feet in just over a mile or two. The views of this range looming down on the lake are amazing. Naturalist, author and environmental philosopher John Muir gazed upon the same scene over 100 years ago and was so inspired that he resolved to climb the Oquirrh Mountains to their summit in the vicinity of Black Rock and he wrote about his experience in his book entitled “Steep Trails.”Chapter 9 of that book “Mormon Lilies” is a detailed account of his adventure.

The following is a small excerpt that describes this view through his eyes so many years ago.

“Looking southward from the south end of Salt Lake, the two northmost peaks of the Oquirrh Range are seen swelling calmly into the cool sky without any marked character, excepting only their snow crowns, and a few weedy-looking patches of spruce and fir, the simplicity of their slopes preventing their real loftiness from being appreciated. Gray, sagey plains circle around their bases, and up to a height of a thousand feet or more their sides are tinged with purple, which I afterwards found is produced by a close growth of dwarf oak just coming into leaf. Higher you may detect faint tintings of green on a gray ground, from young grasses and sedges; then come the dark pine woods filling glacial hollows, and over all the smooth crown of snow.”

While the view is beautiful, the task of reaching Nose Rock can be daunting, due to challenges the hiker will encounter such as bogs, biting gnats, mosquitoes, and as Capt. Howard Stansbury described in 1849, “The malodorous stench of the foul swamps.”

The easiest approach to the rock is by following the beach on an azimuth west that is about 300 yards away from the vegetation on the lake’s edge because the tall grasses, cat tails, reeds and tules are difficult to navigate through on foot. This vegetation is thick, and when I walk through it, I am reminded of the cornfields I used to explore as a kid in Kansas where I was totally closed in with vegetation towering over my head.

To make matters worse, footing is uncertain in the tule thicket. It could be firm but you could sink up to your shins in prehistoric black lake muck. If that is not bad enough, consider all of the spiders who find this an appealing place to live due to the inexhaustible supply of insects.

Once you are directly north of Nose Rock, there is no avoiding the tules if you have made the rock your goal. Pick your best route and make your way carefully to the rock. After you get to its base, which is located right in the middle of the tules, you will be surprised to find that it is significant and geologically erratic. It is a sedimentary mish mash of gravel that was bound together by natural prehistoric cement. It is sharp and will cut you if you make a wrong move, so be careful if you attempt to scale this rock.

Distance from Black Rock to Nose Rock is approximately 2 miles round trip. If you follow this route, take a couple liters of water, sunscreen, sunglasses, insect repellent, gloves to protect your hands from the rock and some old shoes you don’t care about because they are going to get dirty. Fall is a great time to visit because the bugs have died off for the most part. Be safe and enjoy an adventure exploring our unique County resident and neighbor — the Great Salt Lake.