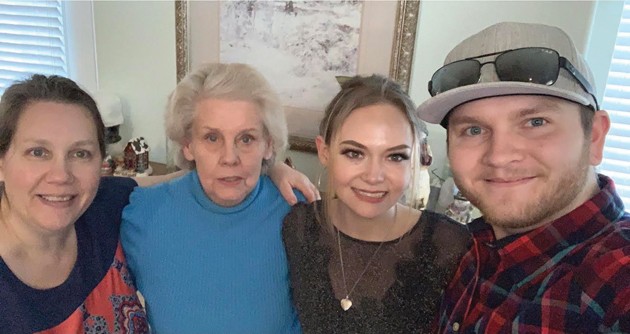 December 23, 2021
The healing power of Christmas

Christmas is my favorite holiday —now — but when I was younger, it wasn’t.

I used to look forward to the Fourth of July, because of the warm weather, and of course, the hot dogs.

I also loved Thanksgiving, because of the eight-course meal we would make. I am a very food motivated person.

However, the thought of good food didn’t make Christmas any more appealing to me as a young adult, even though we’ve always had amazing food and treats during the holiday.

When people used to ask me what my favorite holiday was, I always said the Fourth of July, Thanksgiving, or New Years. They would give me a weird look and ask, “What about Christmas?”

I didn’t see it that way, because I couldn’t get over the feeling of loss that I felt and an emptiness in my heart.

In 2017, both of my grandparents who played a huge role in raising me passed away.

We buried my grandfather on Dec. 6 right before we began preparing for the holiday. Being so overwhelmed with my grief and as a way to cope, I decided that I didn’t like Christmas at all.

Each time a Christmas carol would play on the radio in the car, I would immediately change the station. I related more to Ebenezer Scrooge or the Grinch than I did to any of the “happy” Christmas characters.

My grandparents played a major part in our Christmases each year. I didn’t know how to cope being without them.

My dislike for Christmas continued for about three Christmases, until last year, when my perception changed, even though I suffered another loss in 2020.

Early last year, my mother’s side of the family suffered a falling out with my half-sister. To escalate the situation further, my sister and I got into a heated argument when she came to my house a few days after her and my mother’s blow out fight.

Our argument didn’t help the situation. Long story short, my sister ended up cutting off my mother’s side of the family, which of course, included me. I have not spoken to or heard from her since our argument.

To make matters worse, I haven’t seen my sister’s son — my nephew — since the argument either. He was almost like a little brother to me, because of the 10-year age difference between my sister and I.

My nephew and I used to always have a good time at Christmas when I went to visit my mom’s mother.

Last year, in November, I decided that I was going to make the most out of Christmas by putting up my Christmas tree two weeks before Thanksgiving.

It was my first year married and I was determined to at least pretend that I was enjoying the holiday season. I think my husband thought I was crazy for buying Christmas decorations and putting them up before Thanksgiving had even taken place, but I think he understood. Christmas has always been his favorite holiday.

As I put up the decorations and my house began to look like Mrs. Claus herself had adorned our home, I realized that I was actually having fun and I was excited for the holiday. I don’t know what it all entailed but I do know that the simple act of actually trying to enjoy preparing for the holiday was helping lift my spirits.

As Christmas grew closer and I was able to go Christmas shopping, I realized that the sense of loss I once felt was no longer as heavy. I was excited to be able to spend Christmas with my husband, his family, my dad, and my mom’s side of the family. I realized that even though I was missing four people who could never be replaced, I had nearly a dozen other people who were here now — people I could enjoy. Last year, I was also able to focus on Christ’s birth.

I know that oftentimes this isn’t the case for everyone. For a lot of people, simply decorating their house and spending time with family during the holidays won’t heal their broken heart and that’s okay.

Healing often isn’t contingent upon one simple act. It’s a process. So, if you’re feeling a sense of loss this Christmas, know you’re not alone and it’s okay to feel the way you’re feeling.