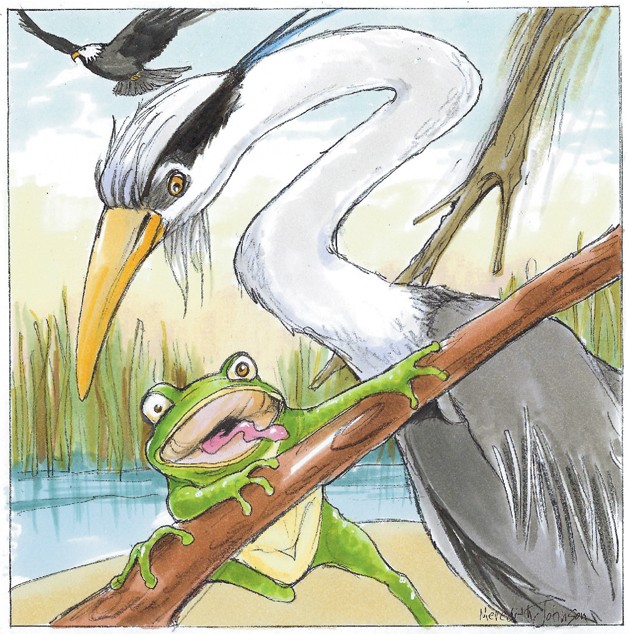 A family of gray herons lived in a lovely swamp bordering a long, winding river. Each of the herons was tall and thin, with a long, graceful neck and a thin, pointed beak. They stood tall and proud, straight-backed and serious. Not one of the herons ever smiled. They waded in the water in silence for hours. Every now and then, they reached out to snag something to eat.

One day, the great-grandfather heron was standing by the bridge watching creatures passing by. He was nearly hidden beneath the shade of a large umbrella plant that waved over his head, and a frog crossing the bridge didn’t notice him.

But great-grandfather heron saw him, and he saw a snake wriggling out of the grass, slithering toward the frog. He watched with interest.

The great-grandfather heron saw terror in the frog’s eyes as he heard the snake hiss, “Where are you going?”

The great-grandfather heron heard the quiver in the frog’s voice as he answered, “I’m returning home from the capital. I was visiting my relatives and learning all the news. I’m heading to the other side of the swamp where I live.”

“Well, what news did you learn in the capital?” the snake asked, carefully eyeing the frog, who was a quick thinker.

“I learned of a new law in the land,” the frog said. “An important law.”

“What is it?” the snake asked.

“Anyone who attacks his neighbor on the bridge will be sentenced to die,” the frog answered.

The great-grandfather heron was impressed, but the snake only laughed. “Is that so?” the snake asked, narrowing his eyes. “And who will kill the attacker?”

The frog took one step back. “The king’s soldiers,” he said. “They’re everywhere. They’re watching everyone.”

The snake laughed again. “Ah, but I see no one anywhere,” he said.

“They dress in bark cloth,” said the frog. “They hide among the trees and watch.”

“They do? Bark cloth, you say?” the snake giggled. But the great-grandfather heron could see that the snake did not believe a word the frog said.

“Yes,” the frog said, looking around, and the moment he averted his gaze, the snake opened his mouth wide, lunged forward and prepared to swallow the frog with one gulp.

But before he could, the great-grandfather heron darted forward, picked up in the snake in his beak and held him up in the air.

The frog let out a deep sigh of relief. “You see?” he croaked. “He who attacks his neighbor will be sentenced to die!”

The great-grandfather heron nodded, but he said nothing. Instead, he simply gobbled up the snake.

From a distance, the great-grandfather heron’s family saw him nab the snake. The herons then went back to wading in the water quietly.

“Thank you, friend,” the frog chattered away, “thank you for saving me.”

The great-grandfather heron nodded, and the frog stayed and began to talk — of the capital, the swamp, his family and many other things. “We shall be friends,” the frog said. “Friends for life.”

The frog talked for a great while. The great-grandfather heron was not so sure he wished to spend time with someone who chattered so much.

Suddenly, an eagle flew overhead. He was carrying a large branch between his talons, but when he saw the frog and the heron talking to each other, he was startled by the unusual pair. This caused him to accidentally drop the branch.

“Look out!” the frog croaked as he saw the branch hurtling toward them; he leaped away, but the great-grandfather heron did not move in time. The branch fell on him, breaking his neck.

He let out a heart-wrenching wail that carried throughout the swamp.

The other herons heard their great-grandfather’s cry. As the frog stood frozen with fear, the herons rushed toward the bridge. “What did you do?” they cried. “Why didn’t you save our great-grandfather? After all, he saved you!”

They had not seen the eagle drop the branch.

“But, but, you don’t understand,” the frog chattered. He could not think of anything to say.

The herons stood straight and tall. “You killed my father!” the great-grandfather heron’s son charged.

“He saved your life, and you let him die,” said one of the great-grandchildren.

“No, wait,” the frog began, but the herons were too angry to listen. They lifted the great-grandfather heron into their wings and turned to carry him away.

As they were departing, the great-grandfather heron’s son stood very still and stared at the frog. “If we ever meet one of your family, we will kill him,” he said.

With that, the family took the old heron away and buried him in a beautiful grave in a place where blue water lilies grow.

Ever since that day, the herons and frogs are sworn enemies. The herons complain that the frogs are too noisy, bothering them when they are trying to sleep, and so they eat them.