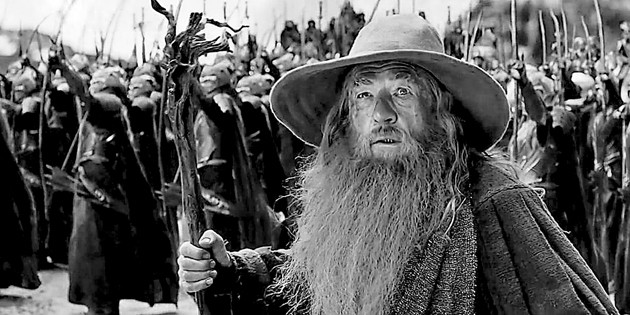 Ian McKellen reprises his role as Gandalf for one last trip into Middle Earth in the drawn-out and disappointing “The Hobbit: Battle of the Five Armies.” image courtesy Warner Bros.

December 18, 2014
‘The Hobbit: Battle of the Five Armies’ is like a date that goes from bad to awful

You know those really awful dates where everyone tells you this person is amazing and clever and wonderful, but you get there and they’re kind of idiotic and almost offensively boring?

You struggle through dinner and as the check comes you give a sigh of relief that this horrible night is almost over, and then they suggest you go to a movie or on a long romantic walk, and they won’t listen to any of your excuses to just go home, and you realize you’d actually rather be at the dentist’s getting a root canal than spend another minute with them — but by that point you’re trapped?

I felt like that watching “The Hobbit: Battle of the Five Armies.”

So, in the third — and, mercifully, final — installment of J.R.R. Tolkien’s classic tale of Bilbo Baggins and the band of dwarves, he joins on an adventure to reclaim their kingdom from a vicious dragon, the dragon vanishes after the first 10 minutes or so, and then comes the battle for the kingdom between, as the name suggests, five armies.

Thorin Oakenshield (Richard Armitage), the restored king of Erebor, and the rest of the 11 dwarves, are taking stock of their home, and Bard (Luke Evans) and Thranduil (Lee Pace) come to claim their respective portions of the treasure. Thorin denies their claims, prompting both leaders to get their respective armies ready to attack the stronghold.

Bilbo (Martin Freeman), Gandalf (Ian McKellen) and the other dwarves try to keep things from descending into all-out war, but the arrival of Dain (Billy Connolly) and his dwarven army throws gas on the fire. When Azog (Manu Bennett) and his hoards march in from two directions, dwarves, elves and men find themselves with a common enemy.

I’m just going to come right out and say it: I hated this movie. Nearly every moment spent in that theater was a special kind of agony. It was, in many ways, a fitting end to a trilogy that seems designed to kill any Tolkien-esque goodwill Peter Jackson built up during his magnificent “The Lord of the Rings.”

To be clear, I do understand “The Hobbit” and “The Lord of the Rings” are two different trilogies that are related but not identical in tone, magnitude and narrative. That being said, they’ve got the same director and screenwriters, many of the same characters and future events from “The Lord of the Rings” are referenced all over the place, so some comparison is required.

Jackson won the hearts of fans and scads of industry awards for “The Lord of the Rings” because he was able to take complex events involving more than a dozen pivotal characters who were rarely if ever in the same place at once and distill it down into three long but relatively easy-to-follow segments. And he did it in such a way that viewers felt like they were submerged in the lush world he brought to life.

In “The Hobbit,” he takes a relatively simple story and adds a truckload of extras because two movies for one book (and, yes, some supplemental material penned by Tolkien explaining the rise of the events in “The Lord of the Rings”) is just not enough. And it just doesn’t work.

Last year, when reviewing “The Hobbit: The Desolation of Smaug,” I said Jackson shined when he stuck to the original plot but faltered when he added in his own elements. That is even more true for this movie.

For example, when Bilbo and Gandalf are just talking about stuff at one point, it’s like, “Yes! This! This is what I’ve been looking for!” Freeman again captures his character perfectly, and he and McKellen play wonderfully off each other. Actually, just about any shot involving Freeman is good, even those that have been, shall we say, adapted for the adjusted plot.

Even part of the plot imagined from the supplemental material, when Sauruman, Elrond and Galadriel are battling the Necromancer, who, of course, later rises to become Sauron in “The Lord of the Rings,” is fantastic. That entire scene lasts less than five minutes, and it feels a bit out of place, but the amount of trash-kicking in that short time is incredible. It is rise-up-from-your-seat-and-pledge-your-eternal-love-to-Christopher-Lee-and-or-Hugo-Weaving awesome.

And then it’s over. And then we go back to the ridiculous love triangle featuring possibly the weakest female character in cinema this side of that blonde lady from “Indiana Jones and the Temple of Doom.” That’s right, I just said Tauriel was weaker than Bella Swan and the “Star Wars: Episode III” version of Queen Amidala.

This chick is supposed to be a captain of the Woodland Guard, so, basically, capable of kicking at least as much butt as Legolas, if not more. Yet the second she, I guess, succumbs to love after being smitten by Kili (Aiden Turner), she is suddenly incredibly helpless.

I don’t want anyone to get all mad at me about giving spoilers, but at one point she requires the help of not one but both of her love interests to take down a single orc, which Legolas, by the way, eventually takes out, so good job, Legolas. But Legolas is in love and he can still fight, it’s fine. I’m sorry, her character just really makes me mad, and an absurd portion of this movie is dedicated to her story, the point of which appears to be that love just kinda sucks.

There are other things, too — the graphics are at times shoddy; at one point a dwarf just disappears from the story with no explanation only to reappear later equally suddenly; Richard Armitage spends probably 40 percent of his screentime just looking up slowly and glaring; and some significant characters’ deaths are oddly underplayed. I could go on and on, but I’ve already overspent my space. Unlike Jackson, I have too much to say and too little time to say it.

The bottom line is this: This is far from the worst movie I’ve ever watched, but it is one of the ones I’ve enjoyed the least. All of its problems are made worse by the fact that the talent and story is clearly there for a terrific movie, but they screwed it up when they turned it into three movies, not two as originally planned. I don’t even take issue with the changes made to the story so much as the fact that the result was storytelling sloppier than that awful date’s goodnight kiss.

“The Hobbit” is in many ways a cautionary tale of what happens to good people when greed steps in, and its big-screen adaptation unwittingly became an example as powerful as any display of dragon gold. It’s a lesson to be pondered long after the credits attempt to redeem this train wreck with a fantastic song by Billy Boyd (who, of course, played Pippen in “The Lord of the Rings”).

One small comfort is that Jackson seems to realize he erred; his heart isn’t in it any more than Tolkien’s would be.