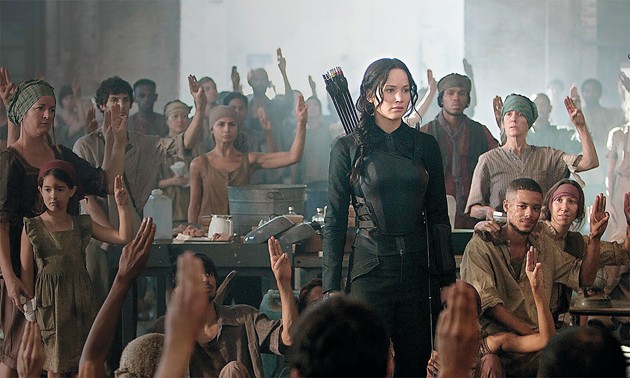 Jennifer Lawrence stars as Katniss Everdeen, the face in front of a rising revolution against the opressive Capitol, in “The Hunger Games: Mockingjay Part 1.”

November 20, 2014
‘The Hunger Games: Mockingjay Part 1’ rises to the best film of the series yet

You know what I hate? When book adaptations split the last book into two parts.

Yeah, I’m talking to you, Harry Potter and the Deathly Hollows and Breaking Dawn — don’t even get me started on “The Hobbit” with its three-part shenanigans.

And oh, yeah, you too, Hunger Games.

But where most two-part finales tend to feel stretched and thin, “The Hunger Games: Mockingjay Part 1” remarkably feels more whole and intricate than the first half of its source material did.

When we left Katniss Everdeen (Jennifer Lawrence) at the end of last year’s “Catching Fire,” she had been rescued from the Hunger Games arena by Gale (Liam Hemsworth) and Haymitch (Woody Harrelson). But Peeta (Josh Hutcherson) had been left behind. Katniss, safe in the bunker that makes up District 13, is now wracked with guilt over Peeta’s abandonment, especially since she had vowed to protect him.

District 13’s leader, President Coin (Julianne Moore), wants Katniss to serve as the face of the rising revolution against the Capitol and President Snow (Donald Sutherland). Katniss agrees, on the condition that the tributes captured by the Capitol, including Peeta, be rescued as soon as possible and are pardoned of any crimes they might be forced to commit — a tough sell for Coin after Peeta makes increasingly inflammatory statements against the revolution on Capitol television with the ever-entertaining Caesar Flickerman (Stanley Tucci).

But with a little convincing from Hunger-Games-designer-turned-revolution-publicity-pro Plutarch Heavensbee (Philip Seymour Hoffman), Katniss gets her deal.

Propaganda like this needs all the help it can get, so Plutarch gathers the old gang: Haymitch, Gale, Effie Trinket (Elizabeth Banks) and Beetee (Jeffrey Wright) and Finnick Odair (Sam Claflin), plus a camera crew (Natalie Dormer, Evan Ross, Elden Henson and Wes Chatham).

The propaganda works — the revolution spreads and other districts start fighting back against the Capitol. But with every victory for the revolution, the Capitol’s noose gets a little tighter, the retribution more fierce, and Katniss worries more and more for Peeta’s safety.

One thing this movie does spectacularly well is depicting the tug and pull between honest intentions and publicity stunts with the revolution. Katniss goes out to one of the districts hit by the Capitol and visits a hospital filled with wounded people.

The footage from the trip is subsequently cut into video clips promoting the rebel cause. Sure, we know Katniss was being sincere, but would everyone else, or would some think she was pandering? It’s like the reverse of Katniss and Peeta’s romance in the beginning of “Catching Fire” — we know it’s a sham, but not everyone does.

Another thing the film does a good job at is showing the intense manipulation from both sides being worked on by this teenage girl. The book is told from Katniss’ point of view, making much of the politics a thing we read about between the lines, but the film’s more third-person approach lets us have a wider look at the forces yanking at her from every direction. Lawrence again delivers enough nuance to make Katniss’ struggle hit home.

Really, though, the same could be said for virtually every main character, and it’s hard to find a weak link. And Hoffman . . . oh, Hoffman. Could that man act. Hutcherson also does a great job of gradually showing the wear on his character as the pressure in the Capitol increases.

Director Francis Lawrence hasn’t let that wealth of talent go to waste, and brings plenty of his own to the table. Perhaps the most emotional scenes are those without headlining talent in them — district residents rising up on their own, or a mass evacuation, for example.

In short, this movie is very well done. From the first half of the weakest book of the Hunger Games trilogy, “Mockingjay Part 1” has risen to be the best film of the series yet. I’m even excited for Part 2.