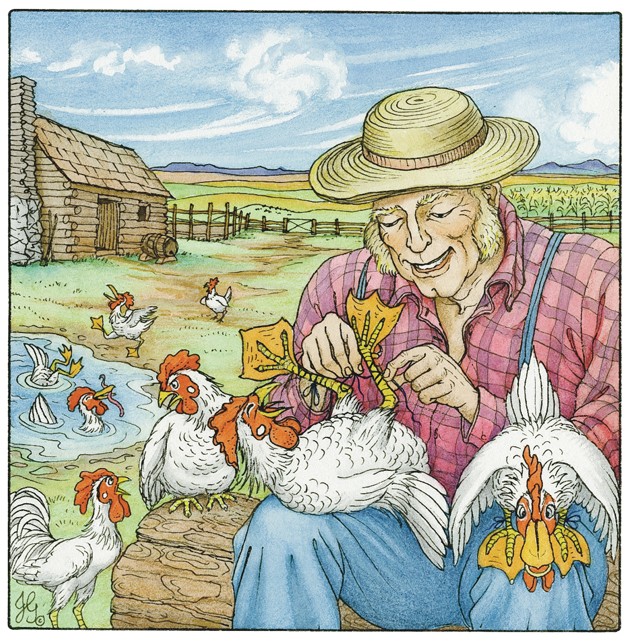 Now, everyone knows the world has all kinds of liars. There are the fellas who lie for their own benefit, and they don’t care how the lies make you feel. And there are the liars who try to make you think that they think you’re the smartest or the prettiest or the most wonderful person in the world only because they want something from you.

But the best liars are the liars who love a lie so much they’ll go on forever telling you the whole whopping story. Those kinds of liars will stay up long after midnight telling you their tales. Those liars, in fact, don’t want a thing from you. They only want to spin a yarn.

People say that’s the kind of liar Bergstrom Stromberg was.

Bergstrom Stromberg was the fellow who always told stories about his great-uncle, Febold Feboldson, the famous Swedish inventor. Stromberg says his uncle was such a great inventor that he taught all the other inventors in the world everything they ever knew. He says Febold taught Alexander Graham Bell and Thomas Edison and Eli Whitney and dozens of others. And maybe that’s a lie. Probably it is.

But the thing is, Stromberg tells a good story, like the way, during the Year of Many Rains, when all the chickens were dying because their feet would sink into the mud and they couldn’t climb out to walk around and peck their grain, Febold Feboldson came to the rescue with a most amazing invention. Stromberg says Febold put webbed feet on those chickens so they could wade. Says he flattened their bills so they could eat through mud. And he says those critters liked their new equipment so much they would jump into the big, huge puddles covering the land, and they would swim. Stromberg says people kept laughing at the way those chickens ducked under the water and came back up, so people started calling them ducks instead of chickens. Bergstrom Stromberg says that’s how his great-uncle invented a whole new animal.

Now, another story Stromberg likes to tell goes way back to 1848, when all these pioneers were rushing out to California to make their fortunes panning for gold. In those days the big Swede, Febold Feboldson, was running a wagon train of ox teams and prairie schooners on the trail from Kansas City to San Francisco.

People say that that winter, a snowstorm hit that was so huge and the weather was so cold out on the prairies that all the snow out there turned to stone. They started calling that year The Year of the Petrified Snow because that snow was so hard it stayed on the ground right through spring, straight into summertime. It was so cold, not a single person would leave his house, much less agree to join Febold to help him run his wagon trains.

So Febold started thinking about how to solve this problem.

Being the great inventor he was, naturally Febold figured out a solution. He traveled with his wagons, all on his own, down to Death Valley in California, because that was the hottest place he knew on this green Earth. When he got there, he filled up his wagons with that desert sand. That sand was so hot, it held all its heat inside forever, so Febold wasn’t cold as he traveled back up to the prairies. But as those wagons bounced over the plains, that sand flew out, and that hot sand spread everywhere, and when it hit the ground, the petrified snow just melted.

But the thing is, that sand made the prairies so hot, the summertime was sizzling, so Febold thought the sand covering Nebraska was all his fault and he better settle there to undo the damage and help the farmers figure out a good way to farm that land.

Every year one thing or another came up, like the year of The Striped Weather when it was so hot and so rainy, all the corn in the farmers’ cornfields started to pop, and the rain soaked all the syrup out of the sugarcane stalks, and all that syrup ran downhill onto the cornfields and rolled all that corn into one gigantic, sticky, syrupy ball as tall as the radio tower and wide as the town.

Now that was the first time anyone ever saw a popcorn ball, so naturally people say Febold Feboldson invented that too, and maybe he did.

For 20 years Febold Feboldson stayed in Nebraska farming the land, and all that time he worked hard to make that climate a little easier on the farmers. He invented all kinds of things, like the hordes of frogs that brought rain when a drought came, and the post-hole diggers that could plow through frozen earth, and dozens of other things all the farmers who stayed in Nebraska will tell you about if you ask. Like they’ll tell you the only reason you don’t see that giant popcorn ball today when you’re traveling across the prairies is because of the horde of grasshoppers that came one year in July and gobbled it up.

But anyway, after 20 years, Febold Feboldson saw that sweet old Nebraska was always going to have the climate it had, and even though that was OK with a lot of the farmers, Febold decided he would move on to California, where things were a little milder, but that’s another story altogether.