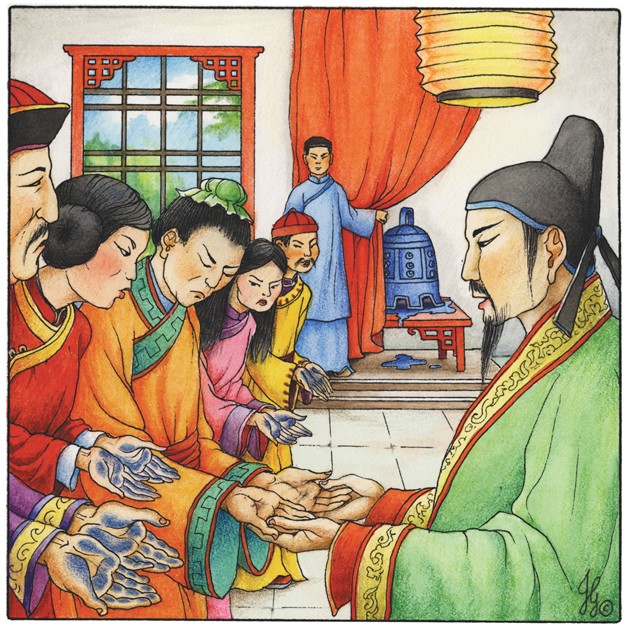 Once upon a time there lived in China a judge known throughout the country for his fairness and his wisdom. People said Ch’en must possess magical powers, for he had solved every case that came before him, even the most puzzling.

One day a man named Tai came to the magistrate’s home. He was distraught and heartbroken. “Someone stole my father’s vase,” Tai hurriedly explained. “It was a gift to my father from his grandfather. My father hoped to pass it on to me.”

Tai was breathless, and his eyes brimmed with tears. Ch’en could see this was a most troubling matter. “Tell me more,” the judge said.

“The vase is worth a great deal, naturally,” Tai went on, “but its sentimental worth is invaluable. My father loved his grandfather, and this is the only possession he left behind.”

“I understand,” said Ch’en. “Are there any suspects?”

“That is the problem,” Tai said. “Far too many people could have stolen the vase. The police arrested more than 20, and I know many more who might have stolen it.”

“I see,” said Ch’en. “Tell me about these possible thieves.”

“Our family has 17 servants who have the run of the house. The piano teacher visits every day to give me and my brother and sister our lessons. It could have been any of my friends or friends of my brother or sister. It might have been the maids or the visitors who came last week or any of the neighbors who frequently stop by.”

To each of these the judge nodded, and Tai began to wonder if even Ch’en could solve their case. The more he spoke of the matter, the more problematic this seemed, and tears that had brimmed in his eyes began to stream down his face. “There’s no way to tell. No one has admitted a thing, and no one saw anything. I fear there is no solution and we shall never again see our vase.”

Ch’en held up a hand. “Do not worry. There is always a solution to a problem. Go home and tell your father I will handle the case, and then you must speak no more of the matter.”

For Ch’en understood that the more Tai spoke, the more impossible the task would seem. Reciting the many suspects would cause him only misery. “It is best to stay silent and think,” he counseled. He knew these words to be true, and having said them, he sent Tai home.

Now the judge pondered this matter. He understood that many people were suspects, and likely only one was the thief. The others were innocent, but proving innocence once accused is not easy. Ch’en would have to find a way to trap the thief, and more importantly, a way to free all those who were innocent.

The next day Ch’en sent his assistant to a sacred temple high in the mountains. “Bring me their bell,” he said. “The bell possesses great spiritual powers.”

When his assistant returned with the bell, Ch’en hung it in the courthouse, and then he sent for the suspects.

All the suspects — and there were more than 25 — lined up before Ch’en.

“This bell is able to distinguish honest men and women from those who are dishonest,” Ch’en explained. “Each of you will tell the bell your story, whether it is one of guilt or innocence. The bell will hear your testimony and will select only the guilty.”

A stir swept through the crowd. How could a bell know who was guilty and who was innocent? How could such a simple object hold spiritual powers? Surely the judge had gone mad. This was impossible.

Still, one by one, the suspects told their tale to the bell. The maids described their routines, as did the servants. The piano teacher swore he would never steal a thing. The friends wept as they told their stories. Everyone was innocent. No one confessed to stealing the vase.

Then Ch’en instructed his assistant to place the bell behind a curtain. This he did. Then, with no one watching him, Ch’en walked behind the curtain and poured a flask full of dark blue ink over the bell, coating it from top to bottom.

He walked from behind the curtain and instructed the suspects. “Each one of you will walk to the bell once again. Extend your hand and touch the bell through the curtain. If you are innocent, the bell will remain silent, but if you are guilty, the moment your finger touches it, this bell will begin to ring. It will ring so loudly, everyone in the province will hear and everyone will know of your guilt.”

One by one the accused walked past the bell. Each person extended a hand behind the curtain. And one by one, each suspect returned to his seat.

Now Ch’en stood before the suspects. “Extend your hands,” he said, and everyone extended their hands. Ch’en looked closely as he walked down the line. The piano teacher’s hands were smeared with ink. So were the servants’ hands, and so were the hands of every maid. So were the neighbors’ hands, and so was Tai’s brother’s friend. Then Ch’en came to a man whose hands were clean.

The judge smiled. “We have discovered the thief. This man did not touch the bell for he feared it would ring out his guilt.”

Ashamed of his act and of himself for believing the bell could recognize a thief, the man stood and confessed his guilt, and before long the vase was returned to its home.

And so once again the great judge solved a case, this time, as always, with his powers of insight into human beings. And also this time with the help of a magical bell.