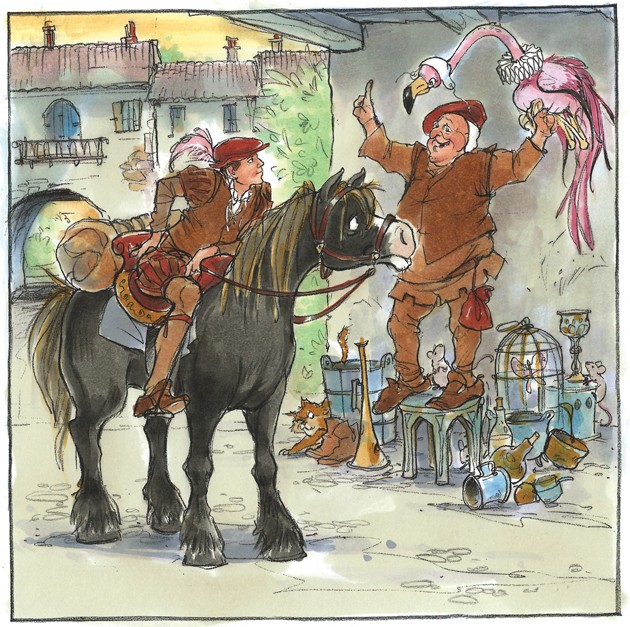 Once long ago, there lived a king who had a foolish son. The king sent his son to school for many years, hoping that he might learn something there. His teachers all gave up, considering the prince hopelessly foolish.

The teachers said, “It is no use trying to teach this lad out of books. It is just a waste of our valuable time.”

The king called together all the wisest men of his kingdom and consulted with them at length as to the best way to make the prince wise and clever. They talked the matter over for a year and a day.

The wise men of the kingdom finally came to a conclusion: “We’ll send the boy on a journey around the world, and in this way he’ll learn the things no one can teach him from books.”

And so he was prepared — he was given fine clothes, a sturdy horse and a bag full of money. Then one beautiful spring morning, he started off.

The prince traveled through many lands, and in each country he learned one thing. There was no place that did not have something to teach him, and although he had been unable to learn from his books, he had an open mind as he traveled, and his mind filled with knowledge day after day.

After many months of traveling, he arrived one day in a city where an auctioneer was selling a great bird.

“What’s the advantage of this bird?” the prince asked.

“Ah, at the command of his owner, this bird will sing a song that will put anyone to sleep.”

The prince decided this might be a fine bird to own, and so he bought it.

The next item for sale was a beetle, and when the prince asked its advantage, he learned the beetle could gnaw its way through any wall in the whole wide world. And, naturally, he purchased the beetle.

When the auctioneer announced the next sale, a beautiful butterfly, the prince considered its worth. What could a butterfly do?

“Ah,” said the owner, “this butterfly is so strong, it can carry any weight upon its wings.”

So the prince purchased the butterfly, too.

The auction ended, and the prince picked up his bird and his beetle and his butterfly and traveled on.

Then one warm day, he became lost in a jungle. The foliage was thick and damp, and he could not see his way. He climbed to the top of the tallest tree he could find; from that height, he could see a mountain in the distance.

He journeyed on, but when he reached that mountain, he saw it wasn’t a mountain at all. It was a giant wall that surrounded the land of the giants.

A great giant — so tall his head touched the clouds — was standing guard.

But the prince wanted to see this land. He wanted to know everything. And so he took his bird out of her cage and said, “Sing.” Within moments, the bird’s song put the giant guard to sleep.

“Now I’d like to get through this wall,” the prince told his beetle. So the beetle gnawed a hole through the wall and the prince stepped through.

The first thing the prince saw when he entered the land of the giants was a dungeon, and in that dungeon was a beautiful princess trapped behind bars.

The prince had learned a great deal on his journey, and one of the things he had learned was that if ever he found a maiden in distress, he must help her. And so he said to the princess, “How can I help you, beautiful princess?”

“Alas, you cannot,” she said. “A giant stands guard at the door of this palace. He never sleeps.”

“Oh, that’s easy,” said the prince. But, just then, the giant, hearing voices, strode into the dungeon.

“Sing, my bird,” said the prince, and the bird began to sing. The giant fell down and was fast asleep in the blink of an eye.

“This beetle of mine has gnawed an entrance through the great wall, which surrounds the land of the giants,” said the prince. “We can escape.”

“I have been confined here in this dungeon so long that I fear I have forgotten how to walk,” the princess said. But the prince had an answer for that, too.

“My butterfly will carry you upon his wings,” he said, and so she climbed onto the butterfly, and they quickly escaped.

The prince returned to his father’s kingdom with his singing bird, his beetle, his butterfly and the beautiful princess, and everyone greeted them with joy.

“Never again will the prince of our kingdom be called foolish,” said the wise men when they heard tales of the prince’s adventures. “With his singing bird and his gnawing beetle and his strong-winged butterfly, he has become the most clever youth in the land.”

And, naturally, the beautiful princess fell in love with the prince, so they married and lived happily ever after. They were forever seeking more knowledge because, as the prince said, “Knowledge is the key to happiness.”