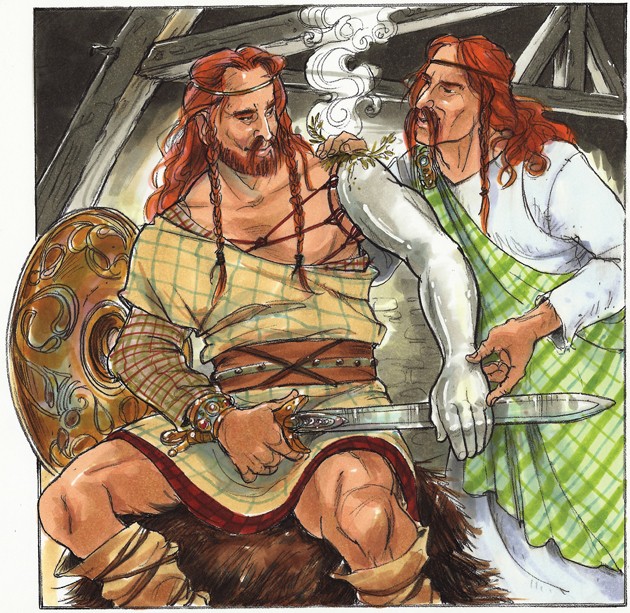 Once upon a time, long ago, there lived two brothers, one a fierce warrior, the other a healer. Dian Cecht, the healer, had a sharp mind and a sharp tongue, but his brother, Nuada, was practical and calm in battle. As the boys grew older, they became important leaders of their people, the Tuatha de Danann.

The Tuatha de Danann inhabited four cities to the north of Ireland — Falias, Gorias, Murias and Findias. There they acquired many magical skills. Dian Cecht became a powerful healer, but Nuada was crowned king for his skills as a leader of men.

Under Nuada’s leadership, the Tuatha de Danann sailed south until they came to the land known as Erin, the country we know today as Ireland. They landed on the coast in heavy fog — a fog the people of Erin believed would protect them from invaders. But Nuada’s men somehow navigated the terrain and landed safely, and once onshore the king commanded the people to burn their ships; he did not want anyone to consider a retreat.

And so the Tuatha de Danann came to land cloaked in smoke and mist. Those who saw them say they arrived wrapped in a cloud of magic.

The people who lived in Erin were called the Fir Bolg and their leader was King Eochaid MacErc. The night before the Tuatha de Danann landed, he dreamed of the arrival of a mighty enemy, and he woke certain he must do battle with these invaders. He summoned his people and called upon them to arm themselves with swords and shields. Led by a strong man known as Sreng, they approached shore.

When Nuada saw the army coming with a strong man in their lead, he ordered his own champion warrior, Bres, armed with a light spear, to meet them and to make his request. Nuada wanted the Fir Bolg to give him enough land for his people to settle.

But Eochaid was determined not to give up a single plot of land, so the people began to battle. The Tuatha de Danann won the first battle, and they won the second, and word began to spread of their invincible strength. After each battle, Nuada repeated his request to Eochaid, but the king of the Fir Bolg remembered his dream. The king felt sure he must continue to fight.

Then came the battle in which Eochaid fell. Soon after, Sreng was killed as well, and the great king Nuada lost an arm.

His chief warrior was Bres, who now became leader of the people. And Bres was strong and brave. But he was terribly proud, and though he and Nuada had once been the best of friends, their friendship had soured.

Nuada was terribly sad. Bres bragged, rather than show his friend kindness. They soon grew bitter toward each other, and that bitterness affected everyone. The Tuatha de Danann became more and more unhappy with their new leader. The people began to dream of the return of their king Nuada.

A gathering of people went to see Dian Cecht, for they needed him to heal the wound that had affected their people. They hoped he might make their king whole again. Although it was true Dian Cecht could cure wounds, he did not have the power to regrow a lost arm. Still, he spent many nights in meditation, searching for a way to help his brother regain the throne. This, he knew, would help to heal his people.

At long last, he knew what he must do. He went to see the smith. By morning, they had forged a gleaming silver arm. Carrying that arm, Dian Cecht called Nuada to his hut.

Dian Cecht and his brother sat inside that hut while the healer chanted every healing spell he knew. By day’s end, Nuada appeared outside the hut, the silver limb attached to his shoulder. He could use the arm as if it were his own.

The people cheered, and now that Nuada was whole again, he could become their king.

Bres was unhappy, but he knew Nuada was meant to be the leader of the people. So the king was returned to the throne, and forever after he was known as Nuada Airgetlam, Nuada of the Silver Hand.

From that day on, war ceased and the Tuatha de Danann lived in peace in their new land.