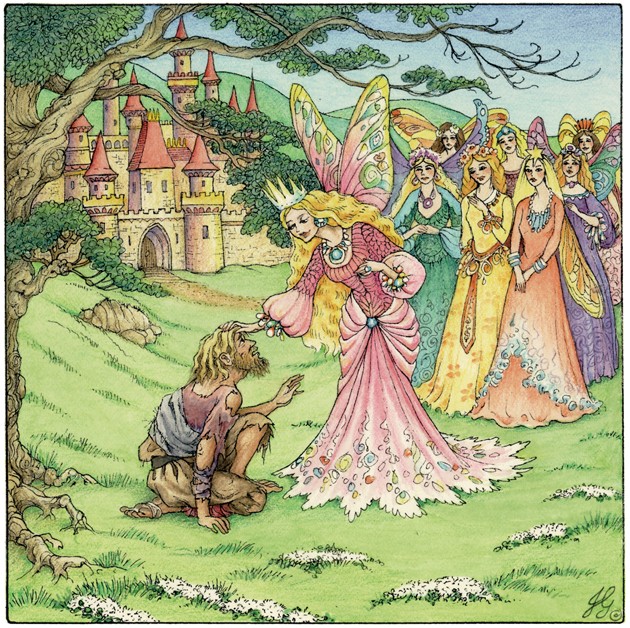 Once upon a time, in King Arthur’s court, there was a handsome, gracious knight known as Lanval. King Arthur admired all his knights, but he admired no one more than Lanval. He appointed him to serve as the steward to the Knights of the Round Table.

Lanval was happy to serve his king, and he was deeply loyal. But as time passed, he began to distrust Queen Guinevere. She was beautiful, of course, and many thought her a wonder, but Lanval noticed her flirtations and considered her behavior unsuitable for the wife of a king.

He kept his feelings to himself, but as time passed, Guinevere learned of his disdain. Some say the other knights were envious and told the queen; others say Guinevere noticed on her own. At last she told her husband she wanted Lanval expelled from the court.

Naturally the king wished to please his wife, and Lanval understood it was his duty to leave. With a heavy heart, he departed, traveling north to Caerleon on the River Usk.

For one long year, he lived in solitude and became so poor that he no longer could care for himself. His anguish grew, and the villagers, rather than help him, made fun of him. So he left Caerleon and wandered around the countryside, living on wild berries and growing more despondent and sorrowful as time passed.

Then one day, in a forest, he came upon a mysterious castle, a place he had never before seen. Lanval stared in wonder at its bounty and opulence — more amazing even than Camelot. As he stared at the marvelous surroundings, the most beautiful woman he had ever seen approached. She was dressed in exquisite robes and a dozen fairies attended to her. “I am Triamour,” she said.

Triamour was a fairy maiden who possessed fortune and power beyond Lanval’s imagination. Her beauty and her power were exceeded only by the bounty of her heart, and that heart fell in love with the poor, lost knight. She did not see the poverty or sorrow of the ragged wretch before her, only the good man he was.

He fell in love with her at first sight.

Triamour took Lanval to her castle, and when he was rested and restored, she gave him a servant, a horse, a suit of armor and sacks of gold. And she gave him her love. “There is just one promise you must make,” she said. “No one must ever know of our love.”

Then Triamour gave him the gift of an enchantment so powerful, he could never be harmed. “No one can hurt you so long as you keep your promise,” she said.

Lanval rode back to Caerleon, where people gazed in amazement at him. Now everyone wished to be his friend. In his honor they held a tournament, and he won every joust. People understood he was somehow blessed.

But no one knew his secret. Although Lanval often visited his beloved, riding deep into the forest, he was always careful no one followed him. He never spoke her name. And as time passed, their love grew deeper, and Lanval’s fame spread.

Eventually the news reached King Arthur. “Lanval has become even more noble than he was,” travelers told the king. Filled with curiosity, King Arthur sent for him.

This time, when Queen Guinevere saw him, she did not despise him. Instead, she found him charming and delightful, and she called the knight to her private chambers.

Lanval could not disobey, so he reluctantly went. “You sent for me?” he asked.

Guinevere smiled her loveliest smile. “You have become so handsome, surely you love your queen,” she said flirtatiously. But despite her best efforts to convince the knight to love her, Lanval remained unmoved.

She goaded Lanval until he lost his patience. “The plainest servant of my fairy woman, Triamour, is more beautiful than you,” he said scornfully. “It is the heart that makes a woman beautiful.”

Guinevere exploded with rage and ran to tell her king Lanval had tried to woo her.

When Arthur heard this, he arrested the knight and called him to the Royal Court for judgment. Lanval’s strength had left him, for he was no longer protected by the enchantment. He had broken his promise to Triamour.

The judges of the Royal Court announced their verdict. “You have one year and two weeks to find this fairy woman you speak of and bring her to court. If you do not return with her, you will be hanged for telling lies.”

Once again, Lanval set off in search of his love. He searched everywhere, but all signs of her had vanished. One whole year and two weeks passed, but he had failed. Now he was not only poor, he was heartbroken.

He rode back to court to meet his fate.

In the courtroom, Arthur demanded the knight be hanged, but members of his court stalled. They did not want to kill such a good man. “Let us send him into exile,” they said.

Arthur refused. “He broke his promise to his king. He is a traitor,” Arthur railed.

The men continued to argue when, suddenly, the doors of the Royal Court flew open, and there, standing before the men, was a woman of such transcendent beauty, she took away everyone’s breath.

Lanval looked down at the floor, fighting back tears, and did not see her at first. But when the room became suddenly silent, he looked up. “Triamour!” he cried, and he rushed to her, and they embraced.

“She is real,” Arthur said, astonished at Guinevere’s betrayal. “My friend does not lie.”

Lanval was set free, and he and Triamour left for her land. There they lived happily ever after. And Guinevere’s lie would forever leave a mark on her husband’s noble kingdom.